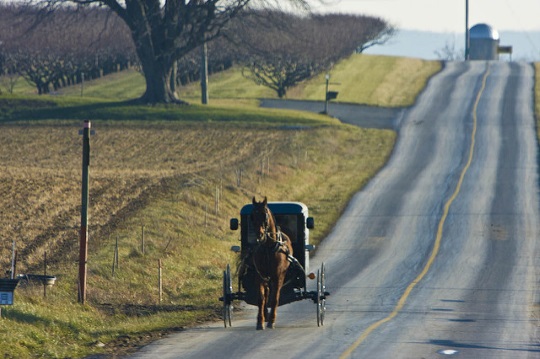 The average American life expectancy is currently just under 79 years. Back in 1900, it was only 47, but for early–20th century Amish it was already greater than 70.

I don’t know the source of this, but let’s take it at face value. Maybe there were lifestyle differences that were more extreme in the 1900s than they are today. Or some other reason I’m not considering.

We then learn that while overall life expectancy between Amish and non-Amish today are similar, the Amish today have certain advantages that make them healthier in old age. These lead to lower disease rates – including for cancer and diabetes.


Why is this the case? TIME presents four main reasons. I’ve summarized them here:

1. Active lifestyle – More walking and manual labor means lower rates of obesity and Type 2 diabetes. A study found Amish to be six times as active as a random sample of individuals from 12 countries.

2. Low tobacco use – Tobacco usage rates have been found to be lower among Amish. A study in Ohio found this translated to a 63% lower rate of tobacco-related cancers. The study also showed an overall 40% lower cancer rate compared to the non-Amish population in the state.

3. Genetic advantages – Last autumn we saw the remarkable story of the Amish gene mutation found in an Indiana community. Amish with the mutation of gene PAI-1 have both a longer life span, and a longer “health span” – with markedly less diabetes and lower vascular age.

4. Aging in place – This is another cultural factor – the fact that nearly all elderly Amish people are cared for at home makes a big difference in health. This is called “aging in place,” with one study estimating that it “has the same longevity benefits as quitting smoking.”

One caveat that came immediately to mind – “healthy in old age” is a pretty broad statement. Maybe the Amish do better in some areas, but in other health markers not noted in the article, they might be relatively worse off, either owing to genetic or other reasons.

Indeed the article concedes this in at least one area:

Cardiovascular disease is one area in which the Amish don’t have an edge, with blood-pressure and heart-disease rates slightly higher than those of other populations. Some of this might be attributable to the Amish diet, which is heavy on pancakes, eggs and sausage for breakfast; and meat, potatoes, gravy and bread for dinner. Working the farm can burn off those calories, but all the fat and salt and carbs still take a toll.

I can say, eating this diet when visiting Amish friends but doing relatively little manual labor (Amish taxi driving doesn’t count), it takes a toll on my waistline. 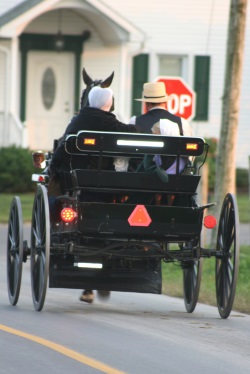 A related point would be that Amish are still eating this heavy farmer’s diet, but proportionally fewer Amish are farming over the past several decades with the move into small businesses.

While manual labor is still a part of the culture, making furniture or running a store simply doesn’t burn as many calories as running a farm with its steady stream of varied tasks typically needing muscle and sweat. So I wouldn’t be surprised if the overall Amish obesity rate is on the upswing (the weight studies cited above date from 2004 and 2012).

Genes are also a double-edged sword. This is most obvious when we see the sad cases of Amish children stricken with genetic diseases. But perhaps there are other genetic effects within the Amish that take a less drastic but still notable toll on some areas of health later in life.

Another caveat is the fact that there are differences across Amish communities. Smoking is more prevalent in some than in others. The genetic mutation noted above was found only in the Adams County, Indiana settlement.

In any case, three out of four of these factors are things that non-Amish people have some measure of control over. They are things that we intuitively know should contribute to health and well-being, and are theoretically available to us.

For most it’s not realistic to replicate these completely, outside of an Amish context (e.g., if you have an office job lifestyle occupying 8-10 hours of your day, not to mention other tasks, you have to manufacture space for exercise), but to some extent these things can be adopted by non-Amish people.

And if the anti-aging drug being developed based on the Indiana gene mutation pan out, English people may soon benefit from that Amish health edge as well.