What kinds of natural remedies do Amish use? The book Plain & Happy Living: Amish Recipes & Remedies by Emma “Jonas Em” Byler covers many of them. It includes chapters like “General Tonics”, “The Herbal Medicine Chest”, and “Poultices, Plasters and Salves”.

The more recent book Nature & The Environment in Amish Life also contains a chapter looking at herbal remedies and natural medicine use among the Amish. For today’s post I’ve pulled five remedies which the authors mention in that text as being used by Amish people. I’ve also included parts from Emma Byler’s book when relevant. 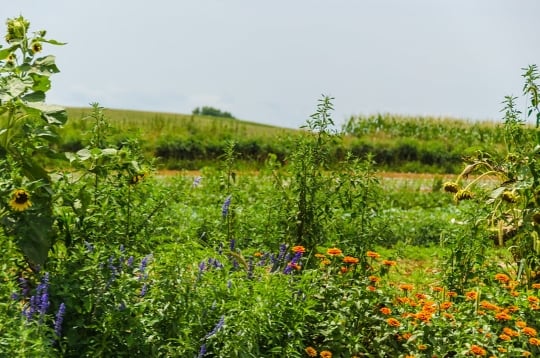 This post is not an endorsement of these remedies, though many seem to have strong support and regular users among the Amish (and certainly not only the Amish). The “Amish approach” to health and wellness is a complicated topic – for an overview, see this list of questions on Amish health and medicine.

In short, natural remedies and treatments are common throughout Amish society. They may be used as a first-line treatment, or after first trying – or in combination with – more conventional treatments.

How an Amish person approaches medical treatment and wellness can depend on things like the specific Amish group, community or family, and of course personal preference.

That noted, here are some different natural remedies used by Amish.

5 Natural Remedies Found Among The Amish

Quotes from Nature & The Environment in Amish Life, Chapter 7 “Bringing Nature Home: From Gardening to Herbal and Natural Medicines.”

1. Tea Made From Nettles & Alfalfa – “One former Amish woman from the Geauga settlement remembered that tea made from nettles and alfalfa was popular for morning sickness for pregnant women.” (p. 135; emphasis added)

In Plain & Happy Living, I can’t find direct mention of this tea, though there is another tea mentioned under the general heading “Pregnancy”:

Strawberry or red raspberry leaf tea may be used until about three weeks before birth only. We always used it up until six weeks before birth then stopped everything except what the doctor advised. The doctor’s medicines were always used along with herbal remedies during pregnancy. Black cohosh and blue cohosh teas are also good. (p. 123)

I had to look up cohosh. It’s a perennial flowering plant found in the US and Canada. Black cohosh has black roots which “are believed to have healing properties”.

2. Dandelion –  “A Swartzentruber bishop told us, ‘The lowly dandelion has some very powerful attributes. I’ve seen people with a handful of wards, and one pound of dandelion leaf powder takes care of them. They drink it in a liquid mixture. I call it the ‘poor man’s medicine.”” (p. 135-6) 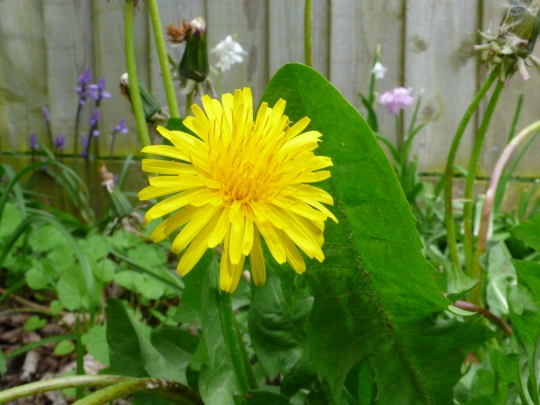 Dandelion is mentioned throughout Plain & Happy Living, with more entries than any other item in the book. It’s offered as a treatment for diabetes, dropsy, as a “blood purifier and cleanser”, and for liver problems, among other ailments.

She also has a bit on dandelion wine:

Each Spring, Dad would make up a batch of dandelion wine. This wine was only used for medicinal purposes, such as for hot toddies and so on. It was also one of Dad’s bases for his bitters. He would fill a bottle or jar with his own blend of roots, berries, some dandelion wine, and the tea mentioned below. Dad would drink a few small sips of this brew to perk up his heart when it was beating too slowly. (p. 96)

3. “Super tonic” – “One one occasion, we visited a home where the women were in the midst of making a year’s supply of “super tonic,” concocted of garlic, horseradish root, onions, and ginger, all cured in vinegar for six months and then strained. The woman of the house was effusive in telling us how a teaspoon per person, passed around the dinner table every night, had kept her family healthy through the winter.” (p. 136)

Going by the woman’s words, this seems like it’s meant as an immune system booster. I took a different concoction, but with some of the same ingredients, on falling ill with fever once at a friend’s place in Lancaster County.

I’m pretty sure they called that by the same name (something tells me the ingredient list for “super tonic”  varies across families and communities). It was strong stuff and difficult to drink in more than a small quantity. It did give me what I could call a “kick of vitality”.

I don’t see anything by the name of “super tonic” in Plain & Happy Living. She does have the aforementioned chapter on “General Tonics”, but nothing in it that’s similar to the recipe above. 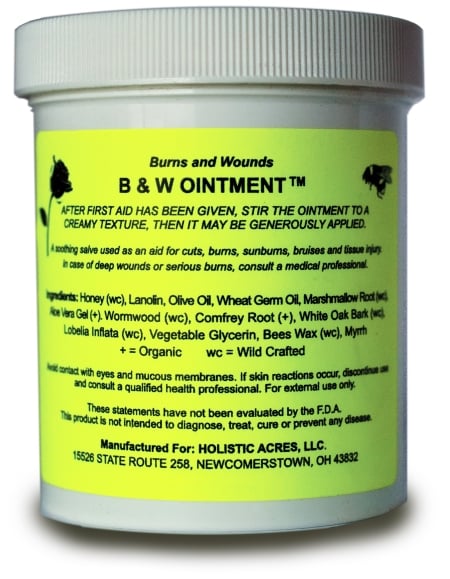 B & W Ointment, a burn and wound treatment created by an Amishman

4. B & W Ointment – “Perhaps the most well known Amish folk remedy is B & W (Burn and Wound) Ointment, a treatment that incorporates burdock leaves. Burns are a particular thread to the Amish community because heating, lighting, and cooking often involve an open flame and flammable liquid fuels. As he describes in Comfort for the Burned and Wounded, John Keim discovered the healing qualities of burdock while standing, distraught, in a field shortly after his child was badly burned. He felt that the Lord intervened, and he had a vision that he could use burdock to heal his daughter. B&W Ointment, a mixture of honey, lanolin, olive oil, aloe vera gel, comfrey root, and other ingredients that is applied with a dressing of burdock leaves, is widely used and praised throughout the Amish community. Though it has not undergone clinical trials, several studies have affirmed its efficacy for first- and second-degree burns.” (p. 136)

As for burns, burdock leaves or John Keim’s ointment do not appear in Plain & Happy Living. But Emma Byler offers up several of her own treatments: 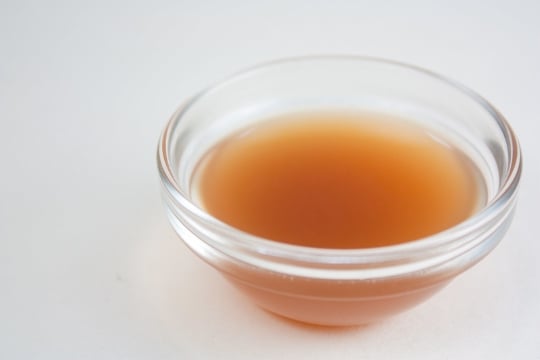 Surprisingly, vinegar is hardly mentioned in Plain & Happy Living. When it is, it’s mostly in the sections on cleaning. It is included as part of the “super tonic” above.

As mentioned, the list of natural remedies used by Amish is long. These are just a few, I imagine readers are familiar with many more.