On a recent “Name that Amish community” post, the question came up of Amish living in British Columbia, Canada.

In fact, no Amish live in British Columbia, though other Anabaptist peoples, including Old Colony Mennonites and Vietnamese Mennonites, live in the province (see Concise Encyclopedia of Amish, Brethren, Hutterites, and Mennonites).  Today, Amish in Canada live only in Ontario, in over a dozen settlements. 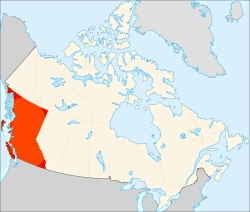 That noted, for one brief period in history Amish were to be found in British Columbia–if only a handful of souls. David Luthy reports on a short-lived British Columbia Amish settlement, located near the gold rush town of Horsefly (formerly Harper’s Camp).  Horsefly is found in the Cariboo Region, a vast forested and mountainous area in southern BC (see David Luthy, Why Some Amish Communities Fail: Extinct Settlements 1961-2007).

Jonas M. Hochstetler, an Ohio farmer and sawmill owner, found himself drawn to the abundant timberland in the Cariboo Region following a visit in the winter of 1968-9. Hochstetler and family moved to a 400-acre farm the following spring. The next  year saw a few more families arriving to set up house in the fledgling community, including Jonas’ married son, Martin, and two more families (one from Ohio, a second from Indiana).

Only a few Amish families ever settled in Horsefly, however.  For various reasons the newcomers had soon returned home.  By spring of 1971, Martin and his wife Susan were the only Amish left.

As Luthy explains, the couple were reluctant to leave their ranch.  “They knew that no matter how much they loved the beautiful area, it held no future as an Amish settlement.  It was an unrealistic location, being too different in its farming practices and too distant from other Amish settlements” (Why Some Amish Communities Fail, p. 9).

With the birth of a son, and little hope of any other Amish (much less a minister) joining them, they resigned themselves to the inevitable.  Martin and Susan left British Columbia in summer 1972, later publishing a book about their experiences, entitled Life on the Edge of the Wilderness.

More on the Amish in Canada to come–this Friday we’ll be posting the Canada Amish guide.