Most people would consider releasing one book an event, but in October Kraybill released two–The Amish Way: Patient Faith in a Perilous World, co-authored with Steven Nolt and David Weaver-Zercher, and the Concise Encyclopedia of Amish, Brethren, Hutterites, and Mennonites. 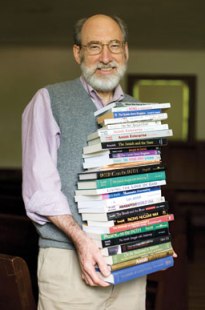 Writing an encyclopedia requires staying in shape.  The author works out between entries by lifting stacks of his other books

Timing of the release was something of a coincidence; while The Amish Way was a more recent project, the Concise Encyclopedia had been in the works for a decade.

Today, Kraybill shares about the Concise Encyclopedia and the many diverse Anabaptist groups in North America.

Browsing through the Concise Encyclopedia, I’ve learned that there are Brethren in Cuba, how Amish quilts came to be considered art, and more about the people known as Bruderhof, a group once connected with the Hutterites.

Concise Encyclopedia 5-book giveaway: How to Win a Copy

Johns Hopkins has kindly shared 5 copies of the Concise Encyclopedia for a giveaway contest for Amish America readers.  There are a few ways to enter this contest: 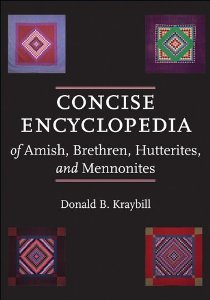 The 5 winners will be drawn and shared on this blog in one week–on next Monday, November 22nd.

Interview with Donald Kraybill on the Concise Encyclopedia of Amish, Brethren, Hutterites, and Mennonites

Amish America: Why did you compile such a book?

Donald Kraybill: I felt there was a need for a single book that would provide an overall short and concise introduction to all the Anabaptist groups in North America. Many people don’t realize how many different groups there are, how diverse they are and where they are located. So my purpose was to provide a single one-stop source for journalists, students, scholars, and others interested in learning about the Anabaptist North America.

How did you decide which groups to include?

Kraybill: Well there are four major Anabaptist tribes: Amish, Brethren, Hutterites, and Mennonites. So that was a pretty easy choice. However inside those tribes there are many subgroups and the decision of who to include or exclude sometimes was difficult. In general I used four criteria: if the group used a tribal name, i.e. Amish in the name of their group; if in their literature the group described itself as “Anabaptist”; if the group was listed in a directory of Anabaptist Churches; and if the group identified itself with a network or fellowship of Anabaptist related churches.

Why did you write all the entries yourself?

Kraybill: It’s true that the essays in many encyclopedias have contributions by individual specialists. This volume is a bit unique because it tries to be very concise. I tried to write short overview essays. By writing them myself I could keep the style, content, and tone more uniform. In some ways doing it this way complicated the process because I had to master so much information. On the other hand, it made it easier because I didn’t have to work with dozens of other people!

How many groups are covered in the book?

Kraybill: Actually a total of 205. We created a directory of groups at the back of the book which lists all of them and their location by affiliation and country in North America.

And how many Anabaptists are there in North America?

Kraybill: Well, we identified 8,711 congregations and 809,845 baptized adult members. It was impossible to make reasonable estimates of population (adults and children) because most of the groups report the number of baptized members not total population. If I were to guess I would estimate that the total population of Anabaptist groups in North America is 1.4 million.

Which of the four major groups is the largest, and which is the smallest?

Kraybill: Counting adult members only, the Mennonites constitute 63% of the Anabaptist world. The Hutterites are the smallest with about 2.4%. The Amish community are 12.8% of the North American Anabaptist world.

What are the boundaries of North America?

Kraybill: Well that’s an interesting question because when I began I naïvely assumed that North America meant the United States and Canada. I soon discovered that North America also includes the Caribbean territories and countries, Central America, and Mexico. It’s actually a total of 23 countries! Not just two like I thought originally. Anabaptist groups are found in 17 of the 23 countries.

How many of these countries have Amish churches?

Kraybill: The Amish are only found in United States and Canada. To be exact in 28 states and in Ontario.

In many of the essays you make a distinction between traditional and assimilated Anabaptist groups. What does that mean?

Kraybill: Well, members of some groups are very traditional, such as the Old Colony Mennonites and Old Order Amish. But other groups are very change minded and very active in mainstream society, whether it’s Mexico or Canada or the United States. Members of these churches engage in political affairs, attend public universities and are involved in professions and use high technology. So I was searching for a way to make a distinction between these two broad categories. It is better to think of a spectrum or a continuum from a tradition-oriented way of life to a change/progressive mindset.

So what are the key aspects of that continuum?

Kraybill: The two key components are these: how separated the group tries to be from the larger culture and whether moral authority is invested in the group or given to the individual. In short: it’s about separatism and individualism. I see dress as the key indicator of where a group stands on the continuum. Churches which require a prescribed dress for their members are toward the traditional whole because dress signals a more separatist boundary with the larger culture, and secondly individuals are willing to give up their right to dress as they please and to follow the moral guidelines of the church.

You mentioned Old Colony Mennonites. Where do they live and how are they different from the Old Order Amish?

Kraybill: Well, read the Encyclopedia! No, actually the Old Colony Mennonites have a Dutch Russian ethnic background. They migrated from Russia to Canada in the late 19th century and then in the early 20th century from Canada to Mexico. In recent years some of them have moved back to Canada and to some areas of the United States. Historically they have been extremely traditional, even more so than the old order Amish.

Today some of the Old Colony Mennonites are still very tradition-oriented but others are in various stages of assimilation into the larger culture. The Amish by contrast come from South German Swiss background. One of the interesting things is that some Amish groups in the United States have sent school teachers to Mexico to train and work with teachers and help upgrade the quality of education in Old Colony Mennonite schools.

How did you decide which topics to include?

Kraybill: Well that was actually quite difficult. I decided to focus pretty much on cultural topics in the 20th century but those of course overlap with historical and religious ones. Thus the Concise Encyclopedia has more of a socio-cultural feel rather than a historical one. I decided to only write an essay on people who were a founder of a particular church in its first 50 years. Otherwise, although I mentioned people in the various essays, there are not essays on any contemporary people. I also tried to think of topics which people outside Anabaptist circles—journalists, scholars, students and so on might want information on.

What are examples of some of the essays?

Kraybill: If we take an ABC approach the list would include some of these: abortion, agriculture, alcohol, Asian-American Anabaptists, automobile, baptism, beard, Central America, cinema, cookbooks, dancing, and yes the holy kiss!

Which essays did you find most interesting and/or surprising?

Kraybill: I must confess the biggest surprise I discovered was that there are Mennonites in the Bahamas! They are purportedly doing mission work, but I haven’t done any field work there to determine the accuracy of their claims! I think another surprise for me was the entry on dialects. We discovered that there are some 256,000 Pennsylvania German dialect speakers in North America. This includes adults and children but it adds up to a quarter million people speaking this unique dialect at their breakfast tables every morning.