In today’s post, Janneken Smucker gives us a glimpse of the homes and quilts of “Church Amish” in Lancaster County, over 70 years ago.

Recently my research interests have expanded from Amish quilts to New Deal era photography. Luckily, there is a small group of photographs in which these two topics perfectly mesh: photographs Irving Rusinow took of Amish and Mennonites in Lancaster County, Pennsylvania, during the early 1940s under the employment of the U.S. Department of Agriculture’s Bureau of Agricultural Economics, which commissioned him for the American Farm Community Study, one of the many New Deal era programs aimed at determining both the ills and successes of rural America.

In the photographic archive of Rusinow’s work on this project are a handful of photographs depicting domestic interiors of what he labeled as “Church Amish” homes. Based on an accompanying 1942 report produced by the Bureau of Agricultural Economics, “Church Amish” referred to what many call the “Amish-Mennonites”—the somewhat less conservative groups that formed following the 19th-century “Old Order” split who were distinct from the Old Order Amish, among other reasons, because they met in church meetinghouses rather than homes for worship.

For this community study, Rusinow received permission from the Amish community in Lancaster County to photograph men, but not women. As art historian Elizabeth Bennett suggests, Rusinow’s photographs of Church Amish interiors absent the women who usually inhabited them, allowed the objects, including needlework in use and in process, to stand in for the women themselves.

I am particularly enamored with Rusinow’s 1941 photograph with a half-pieced quilt lying on the floor of a Church Amish living room. It appears as though the woman of the house just stepped away from her sewing, leaving her treadle sewing machine and quilt project. 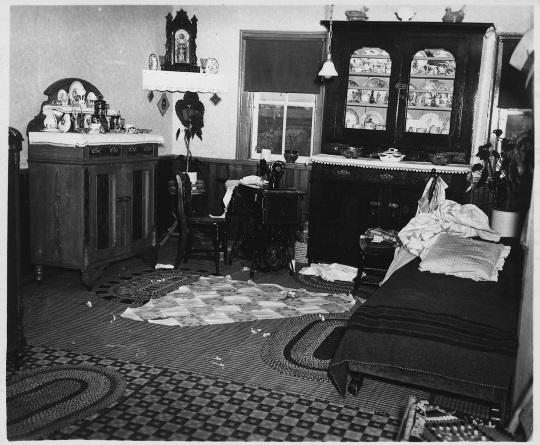 We unfortunately do not have enough information to know where this Amish home falls on the spectrum of conservatism, between Old Order and Mennonite. But we can see that this family embraced material goods: china on display in a cupboard, an ornamental clock, rugs on the floor, just as many contemporary Amish families do.

Another photograph shows two “Church Amish” women in the midst of quilting. Rusinow captioned this photograph “Lancaster County, Pennsylvania. These two Church Amish women are engaged in quilting. Quilting bees are popular in this area. Notice the illuminated family record on the wall.”

I’m uncertain how Rusinow received permission to photograph these women in the midst of their work, if other times he was not allowed. Based on the fancy wallpaper and printed fabrics worn by the women, this is likely a less conservative home. 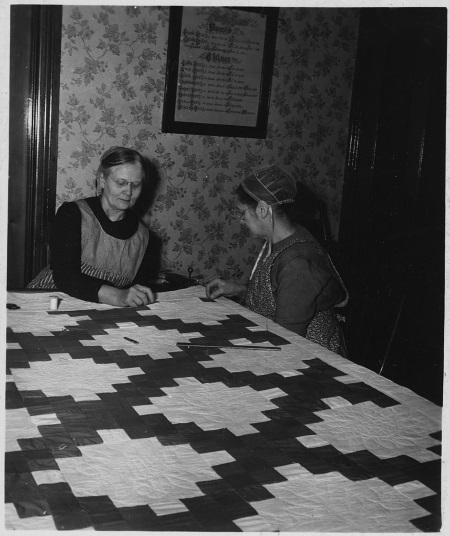 These photographs offer a rare glimpse into the intimate worlds of Amish and Mennonites from over 70 years ago. At that time, New Deal projects considered the Amish as a success story which other rural Americans might emulate in order to help lift themselves out of the Depression. Today, they serve as a valuable window into the lives of Amish and Mennonites from this long-gone era.

Update: here is another photo from Rusinow’s collection, showing an overall plainer appearance, entitled “Lancaster County, Pennsylvania. This Church Amish housewife is engaged in the rapidly disappering practice of baking bread. Note the devotional head-covering which is worn in accordance with I Corinthians 11:1-16.” Hat tip to J. Lapp. -ed. 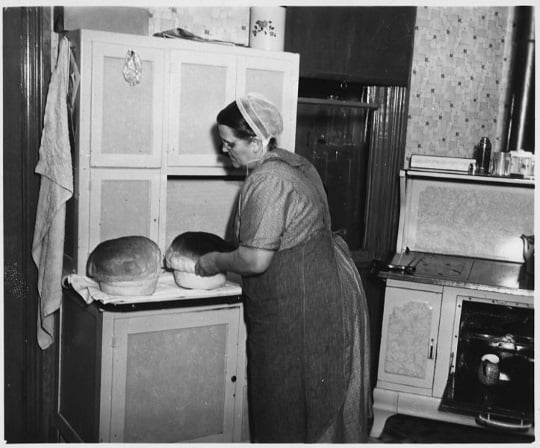 Update #2: Here are three more examples of Rusinow’s photos of people, two using the “Church Amish” term, and one using “Conservative Mennonite”. Two are of women, one of men.

The “Church Amish” woman below is described as having attended “the Mennonite college in Harrisonburg, Virginia.” I’ve included his captions at the top of each photo. The links go to larger versions of each photo:

“Lancaster County, Pennsylvania. The teacher of the school is a Church Amish woman, the daughter of a nearby farmer. She attended the Mennonite college in Harrisonburg, Virginia.” 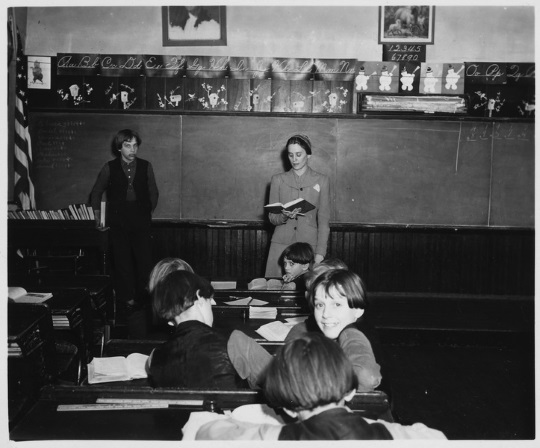 “Lancaster County, Pennsylvania. Stripping tobacco is one of the more important farm operations carried on through the winter in Lancaster County. The three men shown here are Church Amish.” 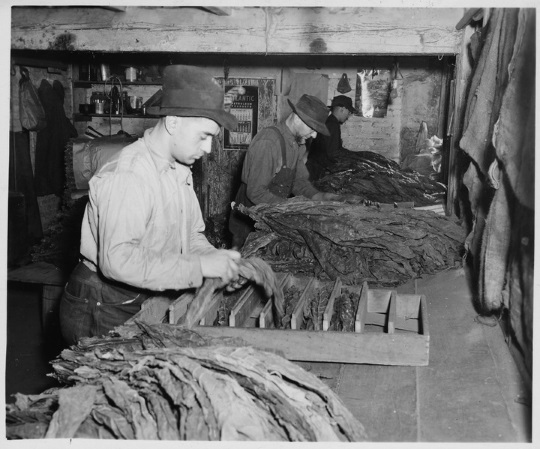 “Lancaster County, Pennsylvania. The most characteristic thing about this kitchen (in a Conservative Mennonite home) is its extreme cleanliness. The colorful kitchen range shown in this picture would not be acceptable to the Old-Order Amish.”

Janneken Smucker is Assistant Professor of History at West Chester University, consulting curator for the International Quilt Study Center & Museum at the University of Nebraska-Lincoln, and author of multiple publications on quilts and quilting including Amish Quilts: Crafting an American Icon.