The Amish of Belle Center, Ohio

It’s fun to visit a new Amish community when you have someone waiting there to greet you. Last Monday I had a chance to drop in on Mark Curtis, son of frequent commenter Don Curtis. If you recall from last year’s account, Mark joined the Amish after living much of his adult life on the other side of the fence, at the age of 50.

Of course, one of my first questions had to be about how Mark came to be Amish. Mark graciously recounted his powerful conversion story as we sat on his screened-in porch on a warm and breezy afternoon. Mark first visited Belle Center in the early 1980s. A teacher in the Columbus area, Mark returned numerous times in the years following, frequently participating in Amish school activities. 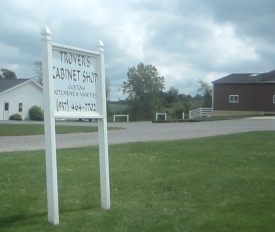 During a time of hardship, Mark was especially moved by the support shown his family by the people at Belle Center.  And after retiring from teaching, Mark decided to join them. As Mark tells it, the community wasn’t terribly surprised by his decision. The possibility must have been percolating, whether Mark himself knew it or not, for some time. Mark has been Amish for nearly a decade.

Mark’s father Don recently moved to the area from Florida to be closer to his son.  We paid Don a visit and witnessed the sheer energy of his 3-legged dachsund “Fritzi”. Just going by its speed, I’d be more apt to think Fritzi had an extra leg instead of missing one.  Zoom.  Don seemed in good spirits, on the way to recovering from a recent heart attack which saw him life-flighted to Columbus for treatment. 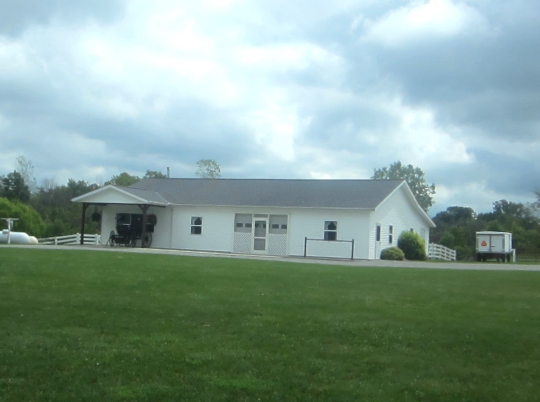 Was or will church be here? Sunday School?

The community at Belle Center is a New Order group with ties to the New Order Amish in Holmes County.  It lies in rural Logan County, a 2.5-hour drive west of that community.  I was surprised to learn that in Logan County you’ll find Ohio’s highest point, in county seat Bellefontaine (prounced, charmingly, “Bell-fountain”). It definitely “feels” higher in rolling Holmes County and much of the area near the West Virginia border than it does here.  But the sign outside town says it’s so, so it must be. 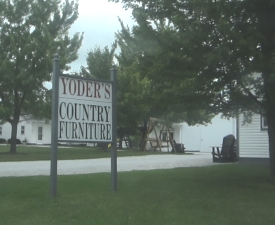 There are 3 church districts and around 80 households in the Belle Center settlement, Mark estimated.  Around 1/5 of the community is dairy farms.  Most of the dairies are found in the east district, the first area Amish settled when creating this community in the mid-1970s.

As we toured the community we passed a number of homes and businesses, clumped together in places.  Mark explained that they have “one of everything” including an engine shop, dry goods store, buggy maker, and furniture manufacturer.  Mark handles free range chickens, selling eggs when he has laying hens (a particularly pernicious fox recently wiped out a dozen; Mark is in a rebuilding phase, so to speak).

Amish enclaves dot the landscape of the Buckeye State as in few other.  Ohio has over 3 dozen Amish communities numbering 3 churches or fewer.  Logan County itself claims at least one other Amish spot, at De Graff (this lower group has ties to the larger Kenton/Hardin County Amish community).

The day after my visit to Belle Center, I sat listening to a Holmes County Amish minister describe the challenges in his large community.  They included difficulty getting land and wild youth behavior.  No place is perfect but living is no doubt different–slower, at the least–for Amish in places like Belle Center.