Amish to government: Outta my outhouse!

Welcome to the not-so-scenic side of Amish country.

The Amish of Hardin County, Ohio (aka Kenton Amish) are in the news for violating waste disposal rules.   Local officials warned Amish some months back that new outhouses will need a sealed concrete tank, and that they’ll need to pay for a waste removal service.

A local news outlet caught up with bishop Elmer Bontrager on the issue:

Bontrager, whose position as a bishop means he holds sway with the others in his Old Order Amish community, isn’t too happy. He said shoveling and spreading their waste from their outhouses onto their crops on their land is a practice as old as time.

Bontrager also had this to say: “We’re not hurting anybody…It’s too much government, and someone deciding to show their authority.”

When I visited Hardin County last summer, I noticed a similar attitude while speaking with an Amish vendor about recent food sales disputes.  Sounds like the Hardin County Amish have been feeling the regulatory pinch lately.

These days it seems Amish in one place or another are constantly making news for clashing with mass society rules.  Amish want to “live apart”, to the degree that it is possible to do that.   We see that in everything from the way they dress and travel to the places they choose to settle.

A more picturesque side of Hardin County

But as Amish learn in these types of cases, you can only live so far apart.  It turns out that a caller tipped off the Ohio Department of Health to the Hardin County Amish situation.

The type of regulatory issues Amish deal with depends on how close they are to mass society.  Mainstream to progressive Amish settlements tend to have concerns more aligned with those of mainstream culture.

As an English person I can more easily sympathize with my Lancaster Amish friend who has to put up with onerous food inspection rules and whose taxi drivers have to have their ducks in a row with the state.  These concerns are more like those of English business owners who deal with keeping government officials happy.

If I had to guess, battling for the right to outhouse freedom is probably not going to be a big winner with the public–especially if they’re grossed out by the apparently venerable practice of human waste being used to fertilize fields (if you were wondering, human-waste-based “biosolids” are apparently widely used by US farmers as fertilizer–though not without controversy).

At the least it might not be worth the bother for these Amish–as Bontrager seems to acknowledge, admitting there is “Probably not much I or the others can do about it, though, I suppose. If there’s a rule, there’s a rule.”

Religion in the outhouse

This isn’t the first time an Amish outhouse struggle has made headlines.  A stricter group may be apt to take a stronger stand–and some have.  In 2008 Amish in Pennsylvania raised a stink (story no longer online) objecting to outhouse strictures on religious grounds.

You may be wondering, just how does religion fit in?  In the PA case I believe it had to do with the requirement that Amish contract with a sewage hauler to remove waste (with the contract being the objectionable point). 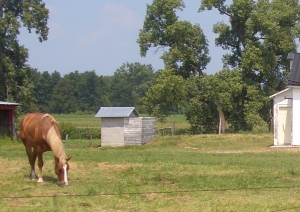 An outhouse outside an Amish school in Hardin County, Ohio

The big consequential Amish clashes such as schooling and military service have hinged on religious issues. But just because the Amish are involved doesn’t mean a religious argument is automatically involved.

It seems you could take things to an extreme–that any law that in some way burdens your lifestyle can be counted as an offense to your religion.

To be frank, Bishop Elmer’s complaints sound more like those of a irked libertarian than those of a religiously-concerned Amish person. Not that there’s anything wrong with an American citizen protesting from that standpoint (though a case could be made that Amish by their own beliefs perhaps should not).  However, down the line it could backfire, especially if Amish burn away collective public sympathy.

But giving it more thought, maybe this is really just one more salvo in an ongoing war of attrition on Amish life? Coupled with the crackdown on food sales, the Kenton Amish may be feeling that way.

And it turns out there are more requirements coming along with the outhouse rule.  Amish will now have to install “a septic system or approved leach bed to properly dispose of the wastewater generated — from laundry, bathing and the like — in each new Amish house.”

One Hardin County Amish woman is described as “see[ing] it as a steady and persistent attack on the Amish way of life.”  What do you think?