Joining the Amish after 50?

If you’re thinking you’d like to join the Amish, odds are it’s the wrong decision.

As we’ve discussed many times (see “If you left the English, what would you gain?“), there are too many challenges for most people to adopt an Amish life.

Still, some kindle a desire to become Plain.  Many are younger individuals.  But sometimes it’s older adults.  A few days ago Don Curtis wrote about a relative of his on the “So you want to join the Amish” post:

I just thought you’d like to know that “Outsiders” do indeed join the Amish. I know this, for sure, because my son joined the Amish. He was no teenager either. He was 50 when he joined. He’ll be 59 the end of next month. He waited until he retired from teaching public school.

He got to know the folks in the community that he is no a part of almost 25 years ago when he got the opportunity to visit an Amish school. Over the years he just became more and more a part.

The handful of people I’ve met who have joined the Amish have all been younger to early middle-age.  On that point, Don’s comments made me recall a conversation I had recently. 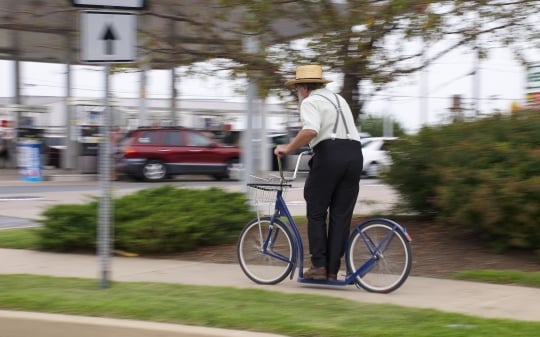 Some Catholic religious orders (ie, monasteries and convents) have upper age limits.  From what I understand, there are a few reasons.  One is adaptability.  Another is a person’s productivity levels as they get older.  Sounds cold but it is a reality in a close-knit self-supporting group.

In my mind, 50 is hardly old.  And even though I still have a ways to go to the half-century mark, I can understand what they mean about “adaptability”.

I’ll be 33 this month.  Thinking back a decade to my 23-year-old self, there are just many more things now that I’m less flexible about.  Opinions, beliefs, heck, I’m even less tolerant about the toppings on my pizza.  Is that a good thing or a bad thing?

Seems like this natural tendency would make it that much more difficult to leave non-Amish life behind.  How has Don’s son taken to Plain living?

As far as changing to Amish ways. He looks, talks, and lives Amish. He can jabber away in Pennsylvania Dutch and I can’t understand a word they’re saying. I tell him he should speak English when I am around. He says he does unless it’s something he doesn’t want me to know about. Hmmm. That’s comforting!

Mark has two horses and several different kinds of buggies. That’s the one thing I’m not really comfortable with. I’m a 100% city boy. Riding in a buggy pulled by a big horse scares me. If he takes it in his head to run off all you’ve got to control him with are two little strings coming from his mouth. Doesn’t reassure me.

I hear you Don.  If I shout “stop” at the top of my lungs is he gonna listen?

As my son always says, “Being Amish isn’t for everybody. Not even for all of the Amish. But it was right for me.”

One out of 100 (or is it higher?) people who attempt to join the Amish will do so successfully (meaning not just join, but stay with the church).

Don’s son has apparently been Amish nearly a decade. He’s one of the minority, and given his age, even rarer. We might not be as adaptable as we get older, but perhaps the decisions we make are in fact wiser ones.