It sounds like a parody, but it isn’t.  An Ohio Amish man was arrested Monday for shaving off the manes and tail hair of an Amish neighbor’s horses. 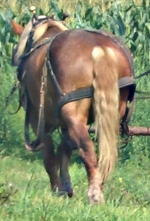 Apparently there was bad blood between them (the two men, not the man and the horses).  He also left a threatening message on the other party’s answering machine.

Inspired by the Bergholz group?  I don’t think horses place the same significance on their hair as Amish do, but sounds like an ugly situation nonetheless.

It also made me wonder how fast horse hair grows.  Not something I thought I’d be pondering Tuesday morning.

Meanwhile, you have probably heard that 7 more men from the Bergholz group were arrested last week, including bishop Sam Mullet.  They have been charged with federal hate crimes–meaning they could face up to 10 years in prison.

What these people have done is bad.  But I’ve got to be honest.  My first reaction was that 10 years seems like a lot.

That’s not all though.   Apparently, the men could face life in prison–“if a federal judge determines the victims were kidnapped.”

What do you think?  I know we don’t have all the facts.  But do the potential punishments sound like too much, or do they strike you as about right?