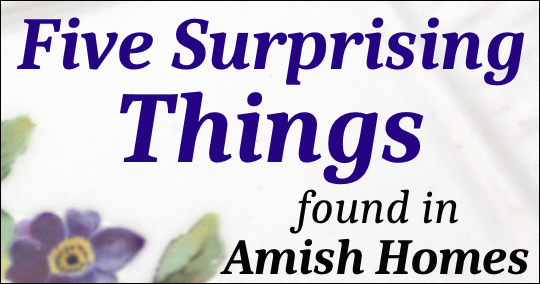 Previously we looked at common features in Amish homes–linoleum flooring, propane lighting, and the natural gas fridge, to name a few.

But what about the more unexpected things you might find in an Amish home? The five items below probably don’t come right to mind when you think “plain and simple.”

The usual caveats apply: not everything seen here will be acceptable in every church. Some of these things are surprisingly common in Amish homes, however.

We’ve covered clocks here before, such as the musical wall clocks popular in Amish abodes. Those melodic timepieces can cost several hundred dollars and are a hit among the Amish.

You can shell out a lot more than that for a timekeeper, however, and get a grandfather clock–maybe the most sumptuous item in the entire Amish home.


When I see one of these splendid timepieces, I think of words like “elegant,” “stately”, and “grandeur”. Not words you usually use when describing the Amish.

Yet many Amish (often woodworkers themselves) appreciate well-made furniture, and I think the grandfather clock fits that category.

I just examined five grandfather clocks for sale in a mail-order catalog popular with Amish–some with mahogany overlays, satin brass dials, and something called “triple-chime Kieninger movement.” Prices ranged from $1,888 to $2,488.

Let’s be honest, if you just want something to tell the time, there’s probably nothing more “overkill” than a seven-foot-tall clock with triple-chime Kieninger movement.

When you can pick up a simple wall clock for 10 bucks at Wal-Mart, it isn’t about getting the plainest, most basic item to fulfill your needs.

But a grandfather clock is a nice way to own an “heirloom quality” decorative item which still qualifies as a functional device (the general, though not iron-clad, rule for decor in Amish homes).

Lindsay Ems, writing in the JAPAS article “Amish Workarounds: Toward a Dynamic, Contextualized View of Technology Use“, describes finding a cell phone charger in an unexpected place while touring an Amish home:

….an interesting piece of technology was visible on the floor of their bedroom next to their bed, about five feet away from a circular, handmade baby’s crib. It appeared to be a car battery with a cell phone charger attached to the top. When the couple was asked about it, they revealed that it was indeed a cell phone charger. The author was struck by how close the phone was to the most intimate place in the family’s home. 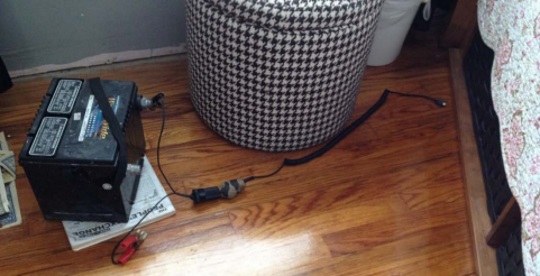 Cell phone chargers would be seen in communities where cell phones are found, of course. If you own a cell phone, obviously you need someplace to power it up. The charger might also be kept in a shed outside the home or in the basement.

Cell phones are forbidden in some places, a grey-area technology in others, and more accepted in progressive communities.

When we think of the Amish, we still think “no phones in the home.” But when cell phones are as prevalent as they are in some places, that’s not necessarily the case, is it?

How do Amish wash their clothes? The answer–for the vast majority–is using the classic 1950s-era wringer washer (you can see one here, third photo down). However, some Amish are now using standard conventional washing machines, powered by the diesel generator.

They still hang the laundry out to dry (the iconic Amish clothesline it not under threat–yet), but having the spin cycle is nice. A few years ago, I wrote about electric washers becoming accepted in parts of the Lancaster County community. 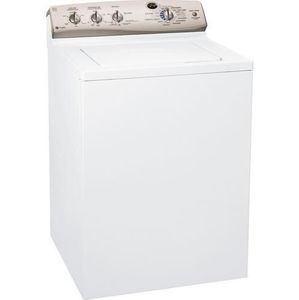 What if your church is like most, and doesn’t permit this technology? You still have your Maytag, but the “Charming Spinner” might help with the drying part. The circular contraption (seen in an ad here, second photo from the bottom), sold by Charm Engine in Ohio, claims to spin wet clothes “50-90% dry.”

While propane and natural gas lighting are common in many Amish homes, sometimes you need to flick something on quickly without fiddling around with lighters and fossil fuels.

Small battery-powered table lamps are popular in Amish bedrooms for that purpose. The one I used on my latest trip to Pennsylvania had three tiny LED bulbs. It was enough to get me to the bathroom in the middle of the night without breaking a leg.

But the room wasn’t lit up like the fourth of July. I’d probably have to strain my eyes to read by that light. Other battery lamps even use the curlicue style bulbs (you can see a rolling floor model here). 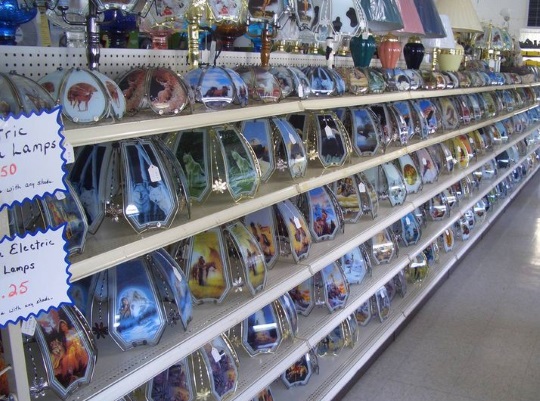 These nightstand lamps have a distinct glass shade with various designs. Colorful nature and Native American motifs are popular. Above you see a photo I took of dozens of such shades for sale in The Lighthouse, an Amish lighting store in Holmes County, Ohio.

China is one area where Amish permit themselves a little extravagance (relatively speaking). It helps that it is technically a useful item.

When I’ve eaten on the nice china in an Amish home, it was for an occasion–special guests, for instance. It also has decorative value.

China is a traditional wedding gift from groom to bride. Flower patterns seem to be common. “Victorian Rose”, “Blue Rose”, and “Clarabelle” are the names of designs available in one catalog. Here’s the “Charmed Rose” dinner set: 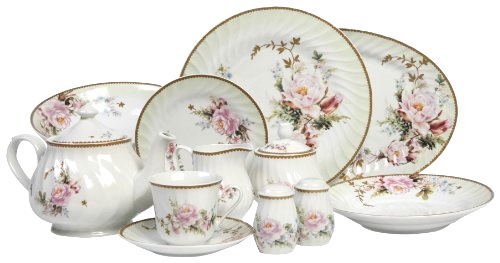 Some Amish may own the china, but are more modest about displaying it. As Karen Johnson-Weiner explains, in the homes of one “very conservative” New York community, “There is often a china closet, but, if it has a glass front, it will have a curtain so that one cannot see the dishes inside” (see New York Amish: Life in the Plain Communities of the Empire State, p. 137). Others do display it.

Maybe china on this list doesn’t strike you as so surprising. But if you consider the popularity of the humble plastic Boontonware bowl, you might assume that the Amish wouldn’t own fine porcelain. That’s not the case.

As you can see, we can find some unexpected things in Amish homes–especially if we assume the Amish are extremely plain or Luddites about technology.

There will always be a plainer segment of Amish society that rejects much or all of the above. But the reality is many things Amish do and own are not as plain and simple as we might think.

What things have you seen in Amish homes–or elsewhere–that surprised you?