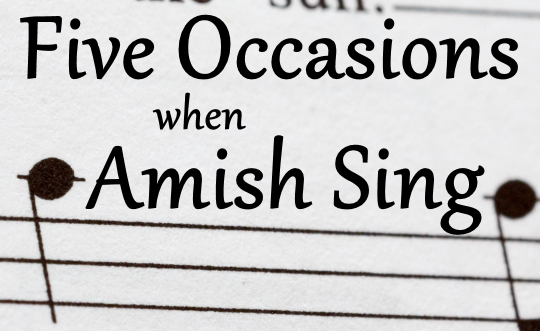 “Give me gas for my Ford, keep me truckin’ for the Lord!”

That’s not a line you expect to hear in a song sung by Amish people. But that’s what I heard while visiting Amish last week in Lancaster County.

I was being entertained by a friend’s children, who put on an impromptu concert one evening, helped along by their father.

They had learned the line about the Ford from a non-Amish friend. It brought smiles and laughter from everyone.

There are few things sweeter than small boys enthusiastically belting out lines of song while acting out what they’re singing–mimicking fish swimming or stomping on the ground.

Even the three-year-old joined in, and did surprisingly well with the English words. Children are exposed to song early, and it’s something that stays with them all their lives.

For the Amish, song is an important part of both daily life and religious occasions. Song can fill a void, give praise to the Maker, or lighten a daily burden. Here are five occasions where you’ll hear Amish sing.

Church songs come from the Ausbund, or in some churches another source like the Unparteiische Liedersammlung. Singing in Amish church is in High German, in a characteristic drawn-out manner. 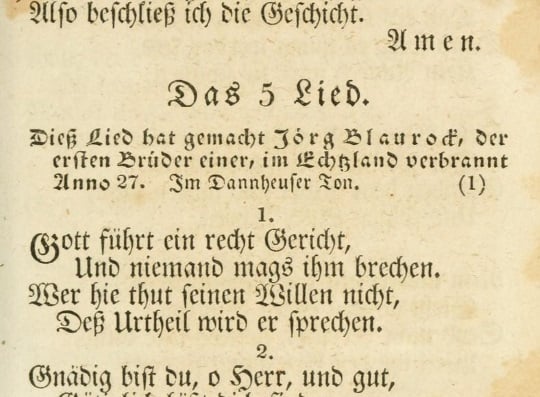 If you ever follow along while Amish are singing, you’ll notice it takes longer to get through one line in the Ausbund than probably any other song you’ve ever heard. The shortest word grows extra syllables and lingers in the air before yielding to the next.

Tunes are not included in the book but known by heart, learned from the experienced and passed on to the next generation. The oldest hymns of the Ausbund were composed by Anabaptists imprisoned in Oberhaus Castle in Passau.

The image above is from an 1846 edition of the Ausbund. That may sound old, but it’s a relatively new printing of the book. In use since the mid-1500s, the Ausbund is the oldest Christian hymnal in continuous use.

In more casual settings, Amish prefer to sing in English. Amish women might sing while doing housework, for instance. Since song is an important and frequent part of their lives, Amish people come to know many tunes by heart. 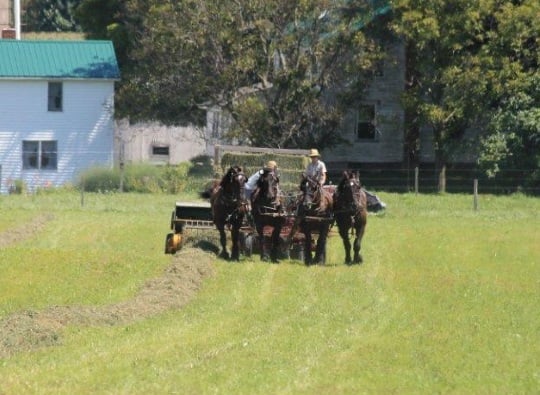 Song puts a pep in your step, and makes the work go quicker. We all know this. So English people turn on the radio while working. Amish people sing.

And some sing very well. I assume those who don’t sing so well, do less of it.

Singing is a standard part of the school day, which opens with prayer and song. Hymn sources vary. For example, children in Swartzentruber Amish schools typically sing three hymns from the Liedersammlung hymnal (see Train Up a Child, p. 48).

Children also sing in English, as you can see and hear in this video recorded in a Wayne County, Ohio Amish school.

An Amish youth singing is not just about singing, though that is the centerpiece event. Youth singings in Lancaster County feature volleyball games and supper before the singing begins (I recently learned that youth play cornerball at some singings in colder months), and socializing afterwards.

Parents also attend these events, held Sunday evening at the home of a church member. The singing can last two hours, so snacks and water are passed around to provide refreshment. Songs may be all in German, or may include English in some churches.

D. Rose Elder, author of Why The Amish Sing: Songs of Solidarity and Identity, describes hearing English songs at a New Order singing. They included “Hide Me, Rock of Ages”, “Just a Closer Walk with Thee”, and “What A Day That Will Be”, from a hymnal called Inspirational Songs (see Why The Amish Sing, p. 80-81).

The story I opened this post with is one example, but it’s not the first time I’ve been treated to song in an Amish home–usually after breakfast, or in the evening.

Amish may also sing outside the home for the benefit of non-Amish people, such as at local nursing homes. 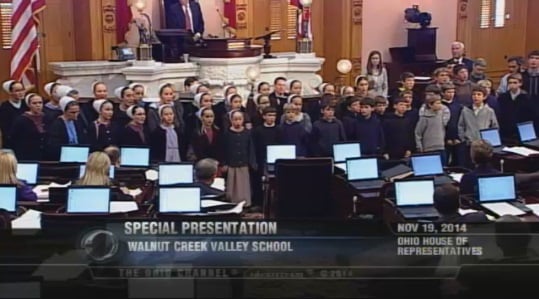 We’ve even seen the unusual example of Amish children singing at the Ohio state legislature.

Wherever you happen to hear it, Amish singing is usually religious in nature and usually, though not always, done with others.