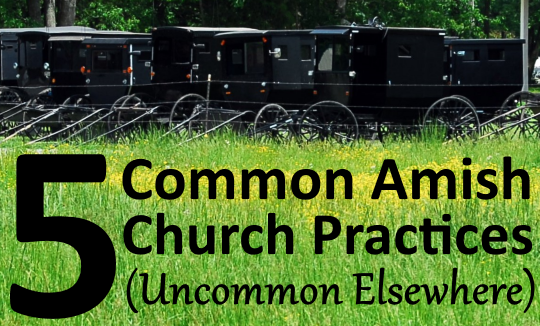 What are some characteristic Amish church practices? Amish do a number of things which make them different from most other Christian churches.

Here are five religious customs common to the Amish, which you won’t see much of elsewhere.

With the exception of a very small minority (here is one example), Old Order Amish do not build churches or meetinghouses. Rather they use a structure at the homes of their members–a workshop, basement, barn.


A large horse-drawn wagon brings collapsible wooden benches from home to home, which are set up in whatever area church is being held, along with songbooks. In many cases the benches later double as tables for the fellowship meal. It’s about as simple and practical a setup as you could come up with. 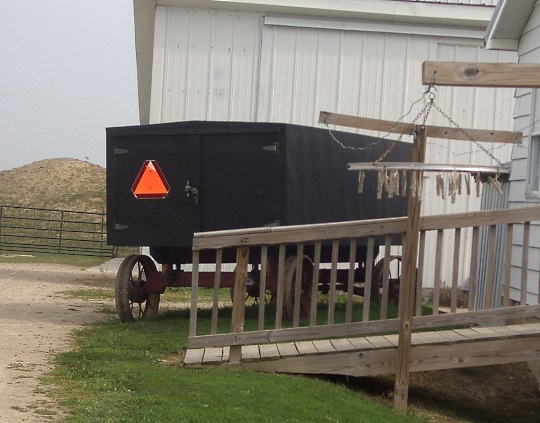 Church service rotates throughout the community so that each household will hold service about once per year. In some cases if a home doesn’t have large enough facilities to accommodate the congregation, church may be held at another nearby home instead.

The practice of home worship is less costly, and more importantly, places the focus on the members and not the building as the “church.”

Amish ministers do not draw a salary for their service. They have to study and prepare to preach on their own time, and deal with other church matters on their own time. They are supported and respected in their communities, but aren’t otherwise financially compensated.

They also don’t follow a calling to leadership in the church. They don’t enter divinity school or go through years of seminary training with the goal of becoming a church leader. From the way Amish talk about it, few wish for the position, which is generally considered a burden (though hopefully they also find it a blessing). 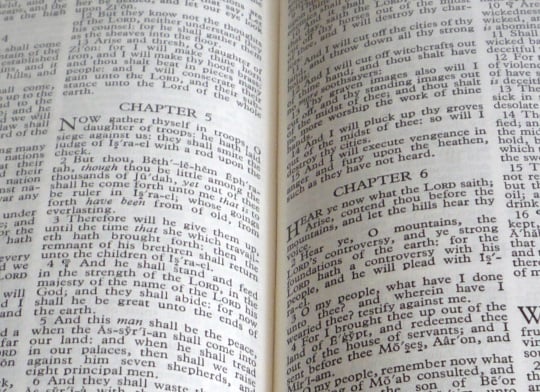 Rather, they are selected in a process outsiders might view as partially a congregational choice, and partially by chance. Baptized male individuals are nominated by other baptized (male and female) members. Being nominated is not unexpected, as it’s something all males agree to at baptism.

Each nominated man selects a hymnbook from a collection, one of which contains a slip of paper on which is written a Bible verse, indicating the new minister. This part of the process may seem random, but Amish feel this is where the hand of God enters the picture.

Amish ministers and in some cases lay members greet one another with the holy kiss. It’s a kiss of fellowship on the lips, given from male to male and female to female. Amish feel this practice is mandated in various places in Scripture, including I Corinthians 16:20, I Thessalonians 5:26, and I Peter 5:14.

As one Amish publication explains, the holy kiss “is a token of love and fellowship with one another and with the Lord. It is to be practiced regularly by all Christians as they meet and fellowship together, as a brotherhood.”

Furthermore, “the holy kiss is a mere form of greeting if the participant does not walk in true holiness and righteousness, loving one another with a pure heart fervently.”

The holy kiss is also given by the bishop and/or his wife as a welcome to newly baptized church members.

Social shunning is one of the most controversial religious customs of the Amish. It is the practice of church discipline, which takes the form of changed social behavior towards an excommunicated individual.

It can include not doing business with an excommunicated person and altered eating arrangements (not eating together with members in good standing, at least in certain situations). It is a reminder of the changed relationship and done in hope that the wayward member will return to good standing in the church. 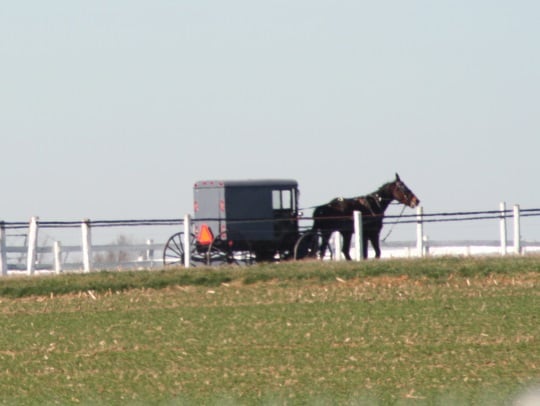 Amish feel that shunning excommunicated members is a Biblically-mandated duty. That’s not to say that Amish people relish the idea.

It is typical that both lay members and ministry attempt to convince a member who has violated church rules to change their behavior, before a vote for excommunication is taken. As one Amishman put it, “shunning is usually done with great reluctance and only once there is nothing else left to do.” He elaborates:

Shunning is never pleasant business both for the church and for the shunned individual and it would be easiest and most convenient to not practice it.

But feeling bound to the Scripture and knowing of no better way other than to try and use Christian Discretion and moderation, the practice continues in varying degrees. Some almost totally ignore it, especially in private settings, while others are more rigorous. It is important to remember there is no sacramental value on the ban to the point a banned one is considered as going to hell. The Lord is still the final judge.

Different churches practice shunning differently, with some following a stricter form of shunning which requires confession and reinstatement in the home congregation to be lifted. Others will cease the practice after a period if a member joins a related, though not necessarily Amish, church.

Shunning was a key issue in the 1693 division involving founder Jakob Ammann which led to the creation of the Amish, and it continues in its different forms as a fundamental practice of the church.

Amish church singing is unaccompanied by instruments. It is an unusual voice-only style with long, drawn-out notes. It’s not really melodic or “catchy.” You don’t have solo voices exhibiting their talent above all the rest.

The closest you get to that are the solo notes of the Vorsinger (song leader) who begins each line of a hymn, before the rest of the congregation crashes in a few seconds later.

While Amish people may sing in different styles elsewhere, they feel communal, unaccompanied singing is better for church. It doesn’t elevate any individual’s instrumental or vocal talent above the rest.

That in turn discourages pride and reflects the unity of the congregation. It also carries on a tradition of song which has lasted centuries. You can hear an example of church singing in the clip below:

What other Amish religious practices are unusual or uncommon elsewhere?