New York Amish have been in the news a lot lately.

We’ve seen stories on vandalism against Amish in Steuben County, new stats showing NY Amish continuing their growth, and of course this week’s tragic accident in which five Amish were killed.

The Amish who died in the van wreck also came from Steuben County–the Jasper/Woodhull settlement.  The Jasper community, founded 1983, predates the recent great wave of migration to New York.  In 2008 it was 4 church districts in size, and looks to have added at least a couple since then.

Leo writes to share a bit about another Empire State Amish community, that of Pulaski in Oswego County.

This is a small group which, as Karen Johnson-Weiner informs us in New York Amish, was founded by “Mose Miller” Swartzentruber Amish in 2006 (the Swartzentruber Amish, while seeming the same to outsiders, are in fact divided into three distinct groups).  Leo shares:

The Mose Miller Swartzentruber Amish community near Pulaski/Williamson New York in Oswego County continues to grow. Two years ago, the settlement had 25 families, mostly from Wayne County, Ohio. Now, there are 36 families, with more being added. They had been homeschooling, but now they have two schoolhouses, with another under construction. 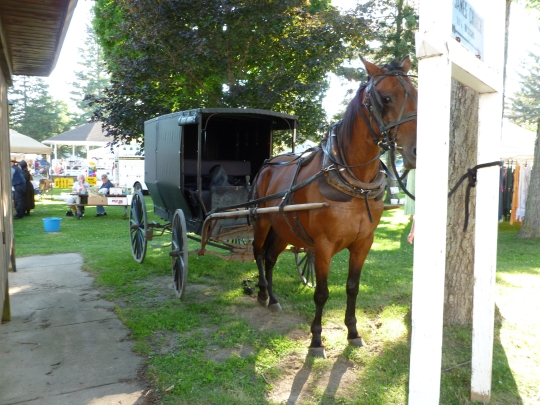 This settlement remains at one district (36 families is a large district by Swartzentruber standards) , but will soon split into two districts. They presently have no bishop; a bishop from Heuvelton in St. Lawrence County has been presiding over this flock. They do have a deacon and other ministers, but have no bishop of their own yet. Much of this information came from an Amish lady who was selling baked goods at the Farmers Market in Pulaski on July 1.

I sometimes get asked if Amish listen to music.  So I enjoyed this account of Leo’s:

I play guitar in a trio, which provided music in the gazebo in South Park in downtown Pulaski. The Farmers Market has been running for a few years and the Amish people have been selling there since they got the OK from the bishop. I was told by the coordinator of the Market that the Amish were at one time forbidden to attend by the bishop because of the music.

The Amish were set up well away from the speakers. I asked the Amish lady if the music bothered her and she indicated that it did not. Two years ago when we played at this event, two Amish ladies were there and I noticed that one of them kept on walking in front of the bandstand. I suspect that she enjoyed the music. We play mostly old Country and Oldies at this event because it seems to be what people in and around Pulaski enjoy.