Following up 8 Snapshots From My Lancaster County Visit, here are 20 photos from my recent stay in Holmes County.

The weather was on the gloomy side, and though my trip was short, I managed to pack a lot into 24 hours.

That included 9 or 10 visits (some with old friends, some with new ones). My friend Rich Stevick was along with me for the bulk of it as well.

In between visits I am usually snapping photos of things I find interesting. These are more or less in chronological order. I hope you enjoy.

A honey stand at a Swartzentruber Amish home. No honey though. 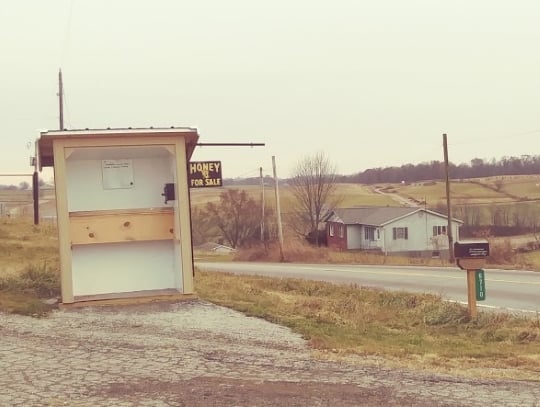 Outside the Country Pantry, an Amish-owned market in Wayne County. 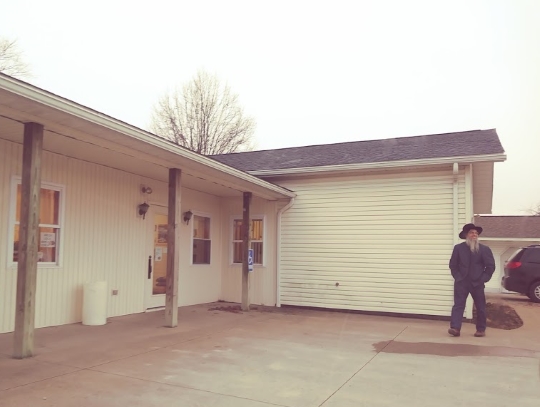 Horses wait for their owners outside an Amish food store – Country Hills Market – just down the road from Country Pantry. 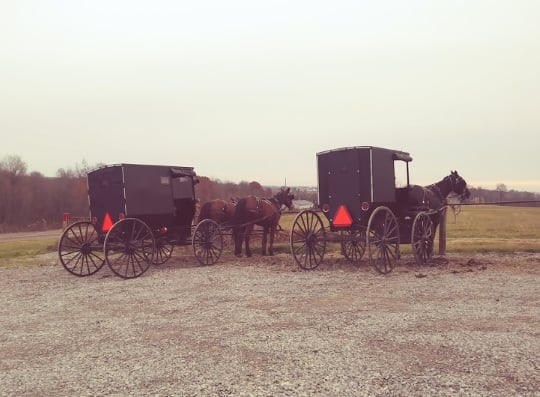 A Swartzentruber buggy travels through Fredericksburg. Compare these minimal visibility markings with those of the Swartzentruber community in North Carolina. 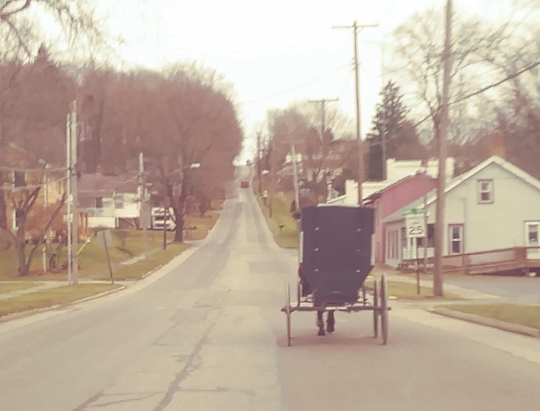 Holmes By-Products, the local rendering plant which was the topic of a recent post. An Amish friend took me by the place. The smell was present but not as bad as it can be. 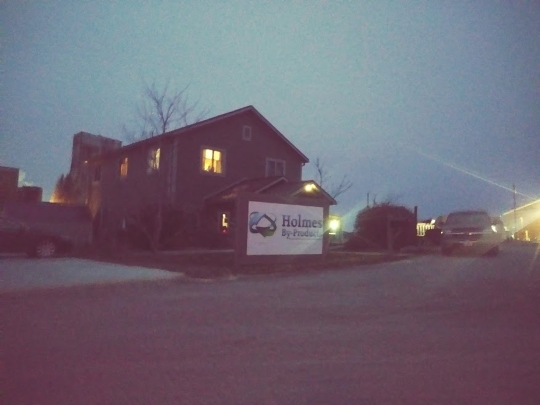 One of the main streets of Millersburg at night. I enjoy strolling around this little town. 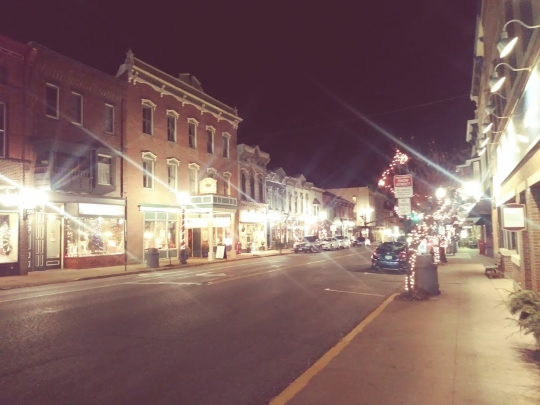 Visiting the Budget newspaper office in Sugarcreek. Rich and I had a nice meeting with the paper’s publisher, Milo Miller. 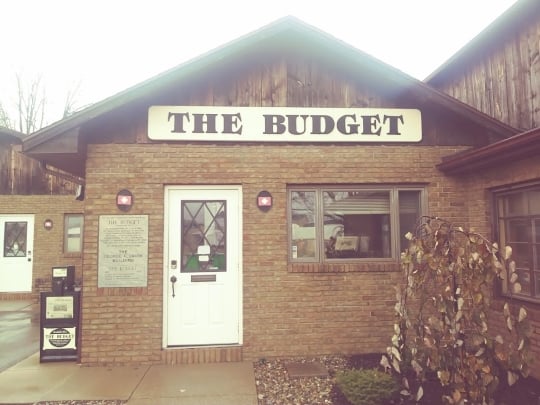 Rich and I stopped in again at Boyd and Wurthmann Restaurant in Berlin. This was our lunch stop last year.

I think if we repeat it next year, it’s officially tradition, right? 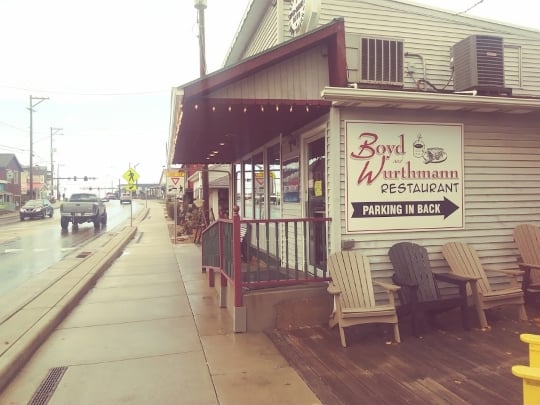 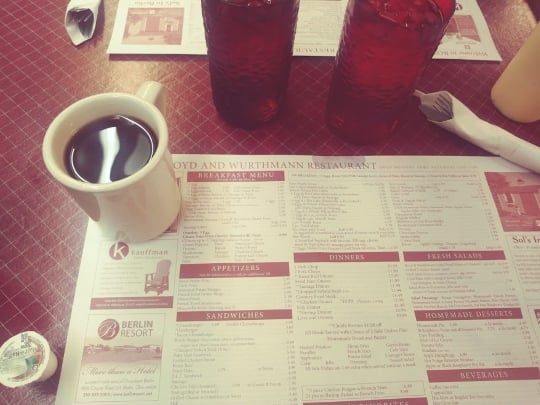 While there we bumped into John Schmid and his friend Phil Sarlo. I enjoyed meeting the both of them. 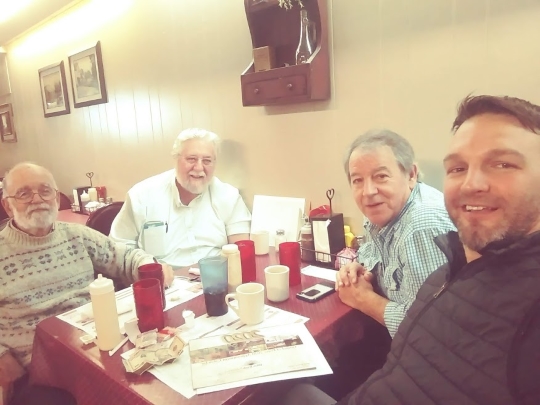 John is a well-known musician who is especially popular with Amish and Mennonite people. He is a self-taught PA Dutch speaker.

Phil is a banjo player and artist. He gave me this card and a personalized sketch of my name, which he also does for Amish children in their schools. 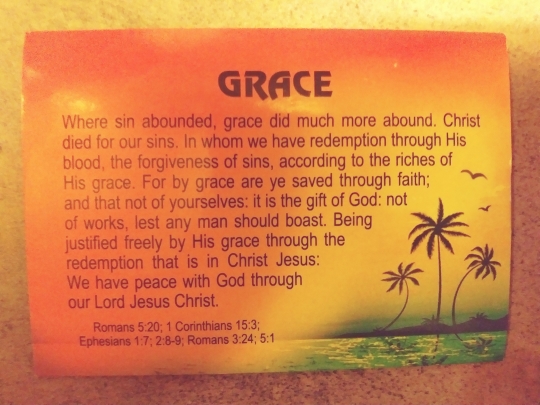 Our next stop was my friend Myron’s place, which is where we got the “I Am Thankful” poem. 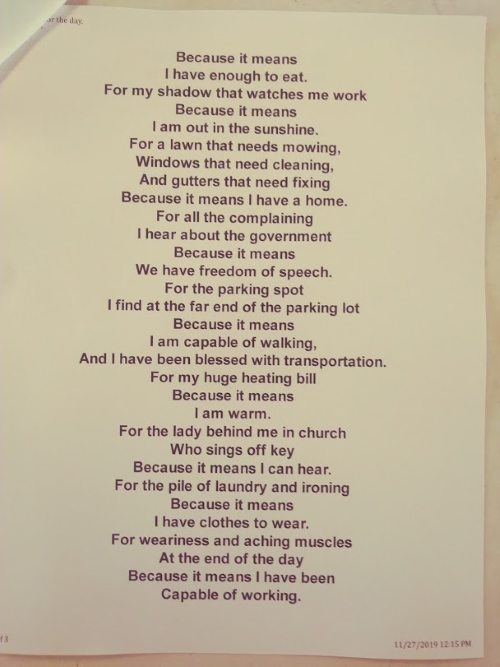 A tractor hauls a church wagon to its next destination. 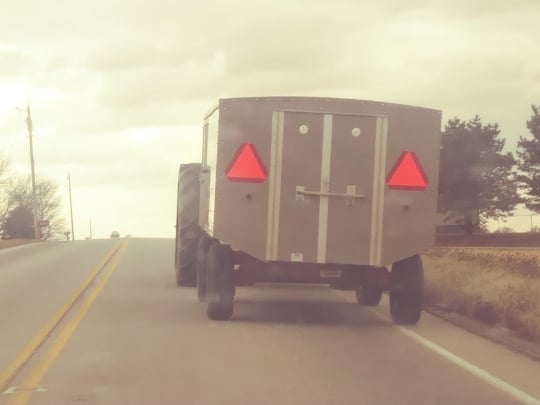 Visitor parking outside Pioneer Equipment, the horse-drawn equipment maker which we looked at here last month.

Rich and I stopped in in the morning and spoke with Milan, one of Wayne Wengerd’s sons, who is in charge of sales. I hadn’t seen him in some years, and this time he had a full beard. 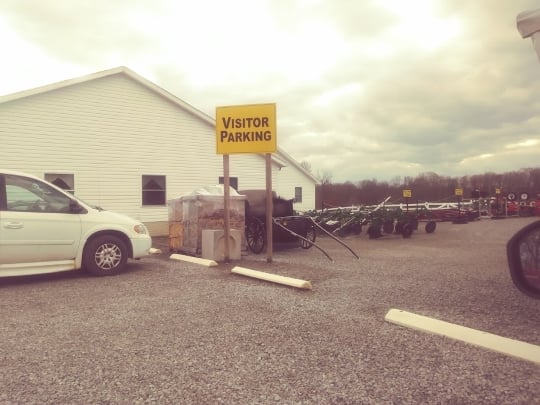 Milan was happy to show us the new Pioneer IWS efficiency solutions products. He took us around the building pointing out where the heavy-duty implements are used to improve workflow.

Later we met with Wayne for a chat in his office, and saw his library with many many books.

Notice anything odd about this picture? 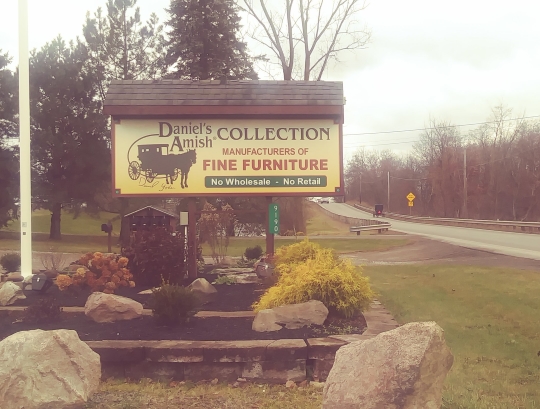 Hershberger’s Farm & Bakery had closed early as it was the day before Thanksgiving.

I got my Thanksgiving pies, pecan and black raspberry, at Der Bake Oven in Berlin instead. They were good! 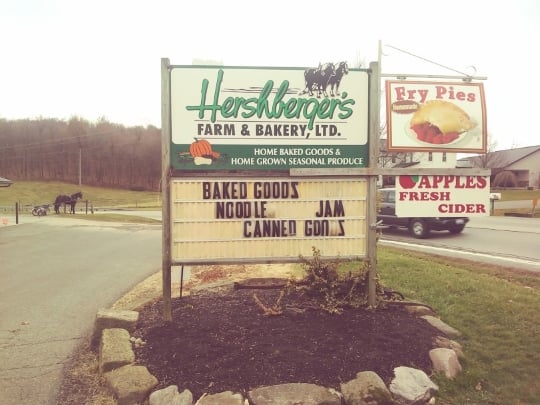 Swartzentruber homes as the day draws to a close. 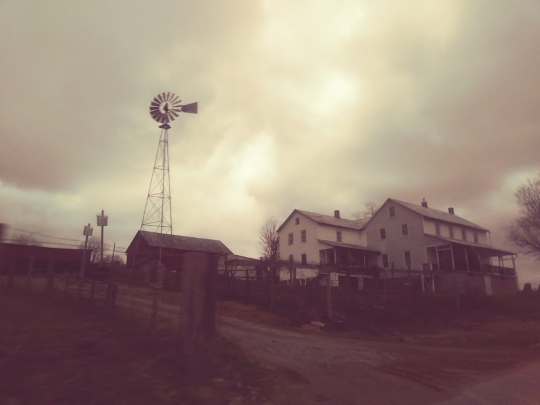 An Amish cemetery on top of a hill. 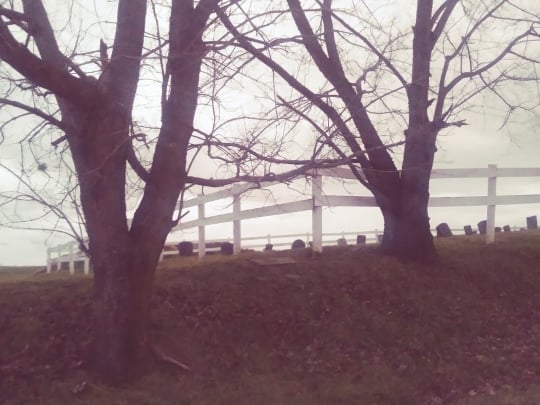 My last stop before leaving was another Swartzentruber farm which had a sign outside advertising rag rugs. 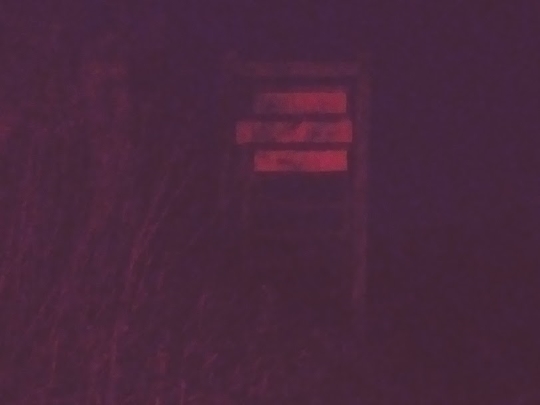 I had noticed this place earlier as Rich and I drove from stop to stop.

I drove up the dark lane to find the traditional two homes on the farm, one the farming family and the second the dawdis’ place.

Can you make them both out in this photo? 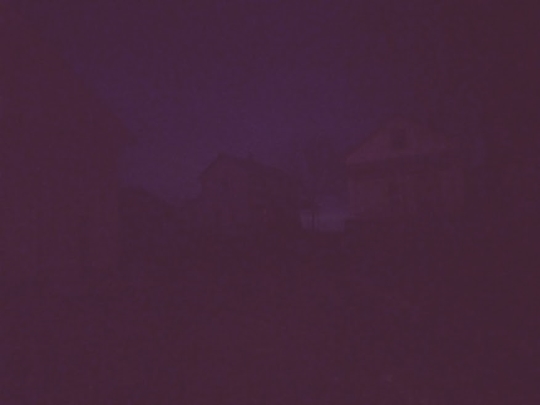 Several knocks on the door of the first home brought no response, though I could hear a child crying inside. So I went to the next home, where as in the first, a single oil lamp provided a meager glow through the window. This happened to be the right spot.

I apologized for coming after dark (though it was probably only about 5:30), inquired about rugs, and they asked me to step in. This Amish grandma and grandpa were busy cutting up turkey on the kitchen table for the next day’s meal.

Grandma started pulling out rugs, showing me many different color patterns, some of which were surprisingly bright (I remember a pastel-ish Easter version and I think one with autumn colors, which were obviously made for non-Amish buyers).

I settled on one with darker hues more traditional to the Swartzentruber Amish. This rug was the more puffy variety, unlike the knotted one I bought last year at another Amish home. Update: I’ve added a photo. As you can see it is predominantly dark – though there is a lighter section, which has some light pattern to it: 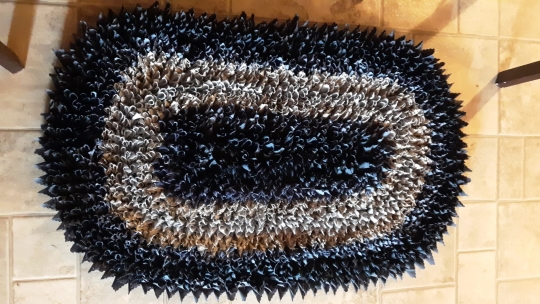 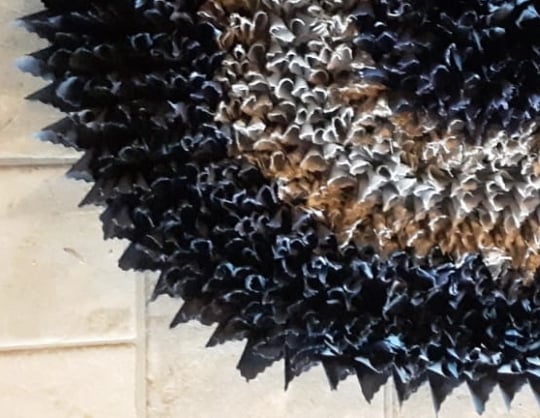 The kind lady informed me that people liked to put these in the bathroom, use them as cozy “pet rugs”, or even hang them on the wall. With that I thanked them and let them get back to the turkey, as I had hours yet to drive.