Pioneer Equipment is a longstanding Amish manufacturer which makes horse-drawn equipment, wagons and other vehicles, and related implements.

The company got its start in the mid-1970s when Wayne Wengerd and his father Henry tested out a plow prototype on a back field of their land, a response to the growing lack of horse-drawn equipment available to Plain farmers.

Amish people had for years used the horse-drawn tools discarded as the rest of the country adopted the tractor and mechanical farming through the early and mid-20th century.

But over time the supply of such equipment began running out, opening the door for a shop like Pioneer. 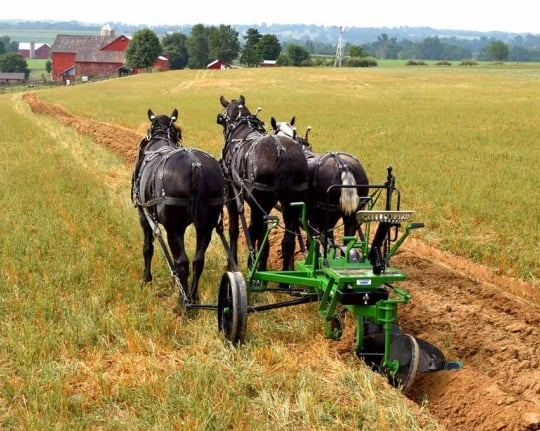 Eight of Wayne’s children now work in the business, located in Wayne County, Ohio, including his eldest son Daniel who serves as president/CEO.

When I first met Wayne and his family in the late 2000s, it was a 30-something-employee-size business, on the larger side for an Amish company (though in some cases they can get much larger).

It seems to have remained a similar size in that regard – described as 40 employees in size in a profile at thefabricator.com.

But that doesn’t mean it hasn’t grown. The article examines changes made in their operations that improved their production from a lean manufacturing perspective.

The improvements were so successful that they even started a subsidiary company which sells the company’s patented workflow solutions to other businesses.

The shop remains off the grid, relying on a 400-horsepower natural gas generator which powers everything from lighting to computerized welders.

Here’s a photo of Pioneer Equipment from the company catalog. Note how the business dwarfs the home behind it: 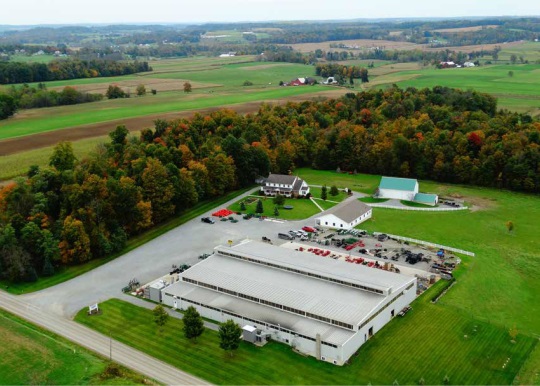 I’ve always been impressed by this business and the people behind it. The article is an interesting read, though it is from a trade publication, so there is jargon and a focus on industry topics in the article.

Here is one section and quote that stood out to me however, especially as it pertains to the Amish approach to work and education in its many forms:

The company works with outside banks and accounting firms, of course. On occasion it collaborates with outside engineers. And it recently hired a marketing professional who isn’t Amish. But like everyone else in the plain community, not one Amish worker at Pioneer attended school beyond eighth grade. Many started working when they were just 13, helping and learning the ways of the shop before working with large equipment at 18. As managers explained, Amish education doesn’t stop when they’re hired. In many ways the education never stops.

To add one more detail, Pioneer’s IT director is an Amish-raised 18-year-old adept at writing computer code and who has developed the custom server structure tailored to the shop.

Ironically the picture that emerges in this article is of a highly sophisticated, innovative, and efficient business making equipment and vehicles of “another era” – to supply a market including both Amish farmers and non-Amish horse enthusiasts around the globe.