If you’re hungry in Holmes County, you could do a lot worse than Boyd & Wurthmann. This restaurant, located in “downtown” Berlin, is a local institution, serving up sandwiches and hearty meals for 70+ years. 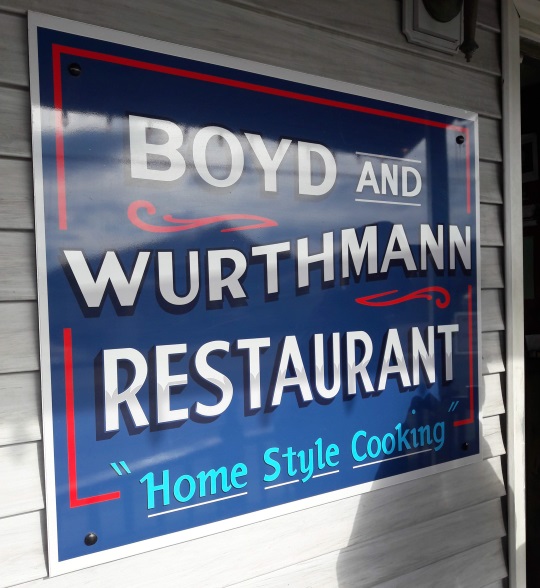 I visited in December, again with my friend Rich Stevick. It’s a circa-1940s restaurant and it kind of has that atmosphere (I wasn’t around then, but I can imagine).

I think a lot of people know about and love this place, but it still has a “local” feel. Here’s a photo from across the street that I took about 6 or 7 years ago: 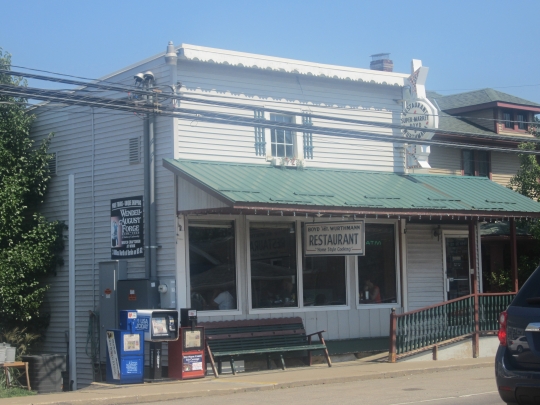 I think of Boyd and Wurthmann as a breakfast and lunch place, but they also serve dinner. Rich and I dropped in for lunch (one of several food stops we made, including Charm Sweet Shoppe & Pizzeria).

When I go there, sometimes with gaps of years in between visits, this place still seems to keep the same feel. I like places like that.

Also I like the name. It’s not promoting itself using an Amish-style description, rather it keeps its”old-timey”-sounding name. It sounds like the name of an old small-town pharmacy or corner store. And it actually has roots of that nature (more below).

All that wouldn’t mean much if the food wasn’t good. I’d say Boyd & Wurthmann serves classic American food with some Pennsylvania Dutch, Amish-style and local specialties.

You’ve got things like Fried Mush, Liver & Onions, and Chicken Noodle Soup on the menu. They serve Amish-style peanut butter spread here for your bread. And good simple coffee (no frappelattacinos that I could see). Here’s a section of the menu: 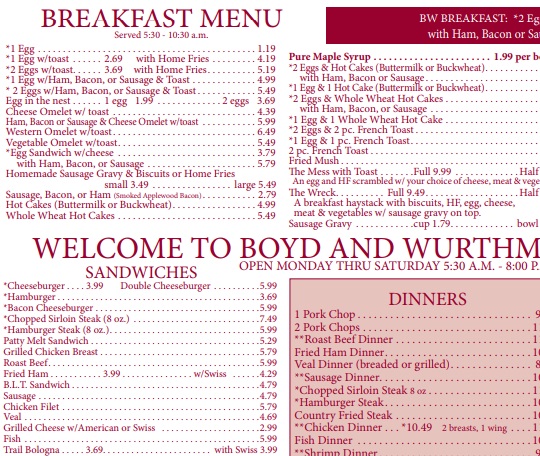 “The Mess” and “The Wreck” are officially on my radar.

The place is also known for its pies. Here’s the board where they share what’s available that day. Twenty pies! 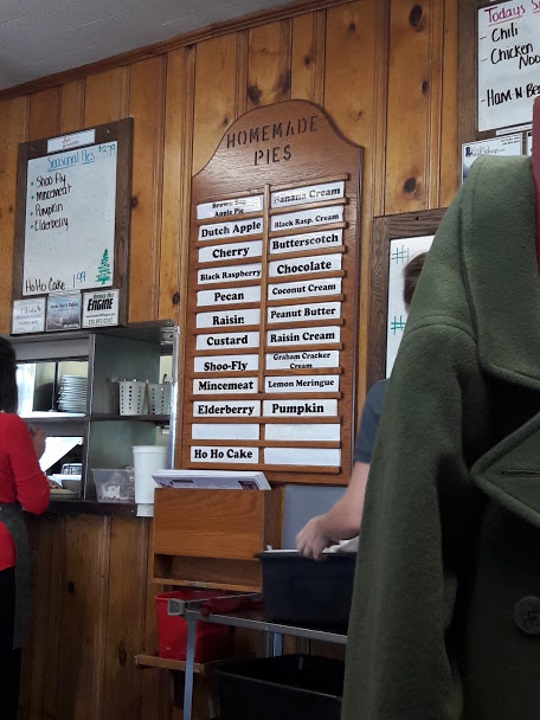 Rich and I got the lunch special, which was some kind of soup, with corn bread. I don’t even remember exactly what the soup was, but it was tasty. The corn bread was great. And they throw in a slab of cheese, why not. 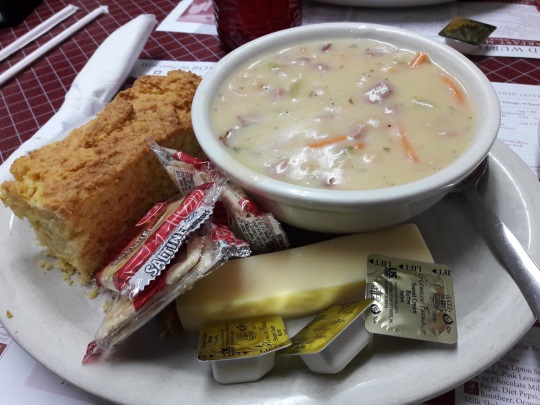 I also added a Trail bologna-and-Swiss sandwich. Trail bologna is a local specialty (there’s a place called Trail not far from here). 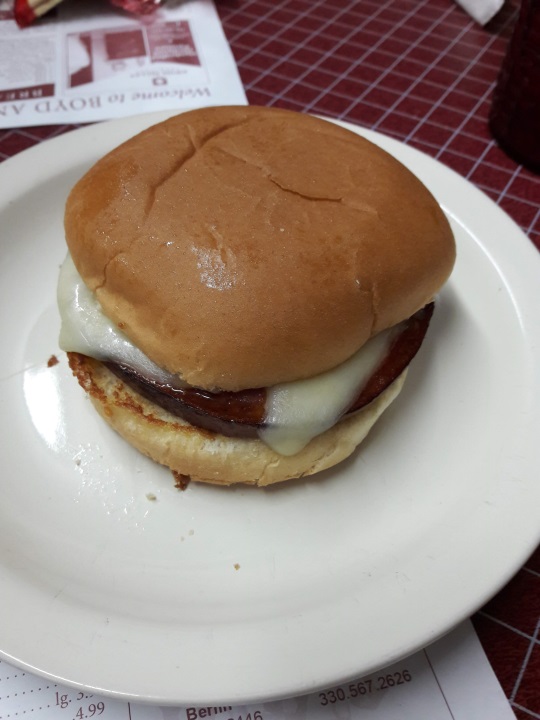 There are usually a lot of English patrons, but Amish folks eat here too. Many of the servers are Amish girls and ladies. No doubt that’s part of the appeal. The restaurant promotes itself as “Where the Locals Eat” on its website.

Here’s a wider view shot from inside, by Chuck Yarrish. This is actually about the emptiest I’ve seen the place. It’s usually pretty full, as it was that day Rich and I stopped in. This was taken in November of last year, so right about the same time we were there. Christmas decor is up. 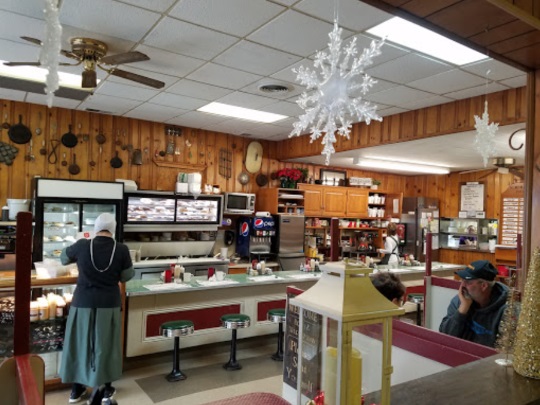 So what’s the Boyd & Wurthmann story? Here’s a little history from their website:

The restaurant began as a grocery market, known as Hummel’s Market, in 1938 and was run for 7 years by Paul & Mary Hummel. It was then owned and operated by Herman Wurthmann and Dale Boyd for 40 years and soon became know as Boyd and Wurthmann. In the 40’s, they put a counter in to seat people and began serving sandwiches as well as groceries. The original, green counter built in the 40’s with seating for 9 is still a local favorite and in use today at our establishment.

Neat. So then the place expanded from just sandwiches:

In the 50’s, the demand for more restaurant services increased so they separated the market from the restaurant and began to serve breakfast and lunch. Their specialty was homemade pie and good Amish style cooking. For nearly 40 years, Byrl Wurthmann would come in early and bake fresh all the pies that were served each day. Currently you can expect 15-20 different pies to choose from depending on what fruit is in season.

Then it got on the tourist maps:

The restaurant soon became the place locals would gather for good food and a chance to catch up with everyone on the local news. In the 80’s, the combination of good food & the hometown atmosphere began to draw tourists to the restaurant. They began to expand the seating area; today we have a counter, 22 tables, 5 booths, and 1 round table which is the local spot. The restaurant went through various owners until it was purchased by the Dennis Mullet Family in 2004.

Here’s another shot of the place from the Boyd & Wurthmann site, from what looks like the 1970s? 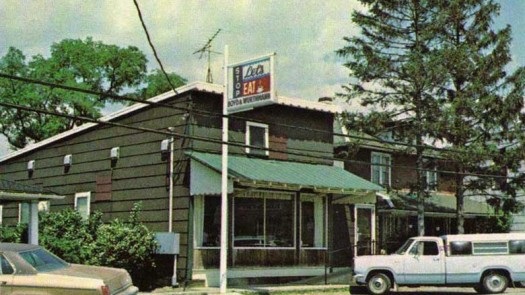 If you are in Holmes County, I recommend a stop. Here are the details:

Anyone else been to this place? Any menu favorites? 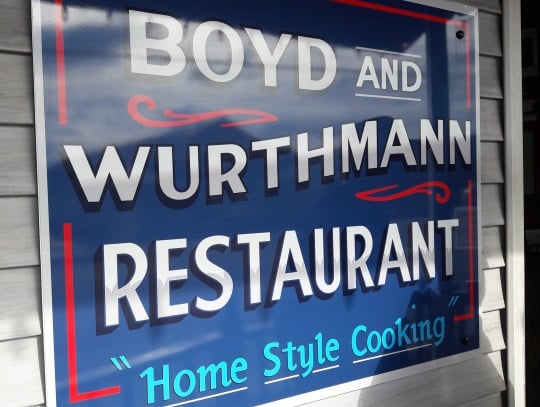