One Amish family in Geauga County, Ohio is facing great tragedy this Thanksgiving. From Newsweek:

One child died and 10 people were injured when a fire tore through the home of an Amish family Wednesday evening in Middlefield, Ohio.

The two-year-old was declared dead on arrival at nearby UH Geauga Medical Center, according to NBC-affiliate WKYC.

Firefighters searched the property for the young girl after bystanders said a child was still in the building. They found her unresponsive and removed her from the burning home.

Numerous injured adults and children were found in a shop on the property. Four victims were medically evacuated to nearby hospitals via helicopters. Five were transported by ground ambulances. Two further victims were treated on the scene.

Multiple local fire and ambulance crews attended the scene. Firefighters battled the fire for about 20 minutes before declaring it “under control.” Authorities left the scene at about 10.30 p.m. No firefighters were injured during during the incident.

Some of the family have severe burns. Victims ages range from one year old to early 40s. 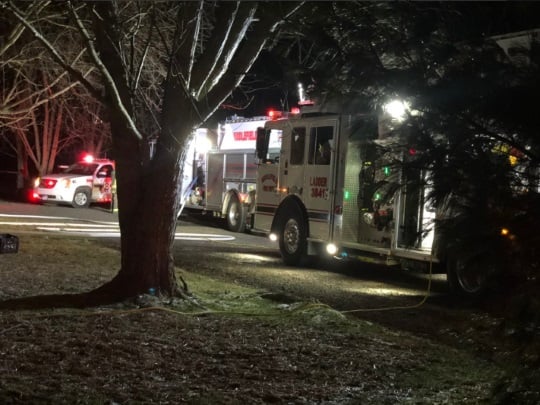 Fire trucks outside the scene. Middlefield is at the center of the Geauga County settlement, the country’s fourth-largest. Photo by Andrew Horansky/WKYC

Some Amish categorically oppose smoke alarms. I’m not aware that this is a family from one of those groups.

For what it’s worth, Geauga County has two separate affiliations – a larger, more progressive group, and a small more conservative group known colloquially as “Number Twos”.

Steve Scott describes the Number Twos as the “equivalent of the Andy Weaver Group” – a rather conservative subgroup in Ohio (see “Clusters of Amish Subgroups and Networks”, unpublished paper by Steve Scott, 2009).

Here’s the report from wkyc.com:

It’s unknown at the time of posting how the fire started. I did not see any info in the multiple news reports so far on contributing for the family, but if so, will post it.

In any case a reminder to be grateful for safety and the roofs over our heads, in light of this tragedy and of course the massive California disaster. Prayers for all those affected.