The new Ohio law requiring flashing yellow lights on horse-drawn vehicles came into effect in September. And as predicted here months (and years) back, some Amish in the state are not complying. From Fox 8:

ASHLAND, Ohio (WJW) – A new law that makes flashing yellow lights mandatory on Amish buggies, and other horse-drawn vehicles across the state, is now being enforced by a number of police agencies in Northeast Ohio.

The new law is not popular among the Amish, and some community leaders are openly scoffing at the new flashing light requirement.

On Monday morning, there were some unhappy members of the Amish community as deputies and troopers began writing citations in Amish communities in northern Ashland County.

“It’s our job to enforce the law and we’re asking for voluntary compliance and if they don’t, they could face citations and fines,” said Lt. Don Sims with the Ashland County Sheriff’s Office.

Dash camera video obtained by FOX 8 shows two Amish men who were pulled over outside Ashland by a deputy for violating the new law.

When asked if they were aware of the flashing light requirement, one of the men told the deputy, “We heard about it. I would put it on but my bishop is not allowing me.”

This area of northern Ashland County is home to a sizable Swartzentruber Amish community which also lies in next-door Medina County. These are the Amish which were obviously going to have an issue with this law. 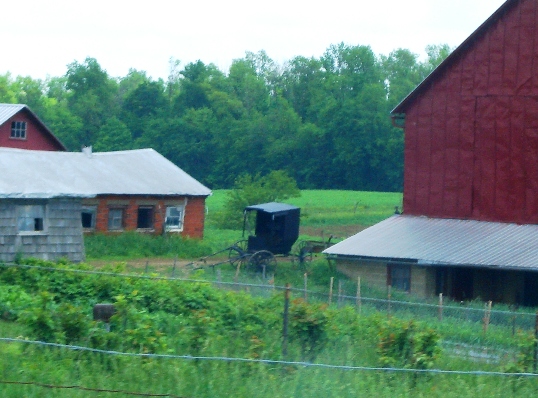 There was apparently a grace period following the law’s implementation, but now it’s enforcement time.

Law enforcement is “hoping with some further education and outreach and enforcement” they can compel the most conservative Amish to comply (this is called “chang[ing] Amish hearts and minds” in the article). I’ll just say good luck with that.