The Amish smoke alarm issue has been ongoing for a number of years in New York state. David Belton, who made the PBS Amish documentary, has written an article on the topic for BBC.

Swartzentruber Amish in northern New York have violated building codes by not installing smoke alarms in their homes, leading to fines and court cases. The core of the objection appears similar to that towards the SMV safety triangle. 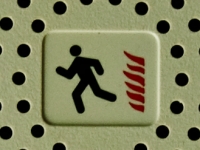 Belton speaks with Mose Miller, a Swartzentruber father of 9. The comments he quotes seems to reveal just how offensive the technology is: “I don’t need a devil on the wall to tell me if my house is burning” explains the Amishman.

Maybe nuance got lost somewhere, but this quote implies the speaker views alarms as categorically evil–not just neutral but having the potential to lead to evil (as many Amish might view phones or cars). That’s a pretty big difference and reminded me of the comments of one fairly progressive Amish acquaintance, that in some sense his own plain-dressing, buggy-driving Amish clan was actually closer to the English than to the Swartzentrubers.

“If God does not wake us, well, that must be part of his plan,” Mose explains, echoing what objectors to the SMV insignia often say.

These types of comments are so striking in a world where moderns like to think we can control every aspect of our lives (and not just striking, but no doubt offensive to some). Though I might not personally agree with his approach I find it difficult to object to Mose’s closing comments that “We’re just pilgrims and foreigners, just passing through…This life is just a speck in the sand, compared to eternity.”