There’s one favorite “book” of mine.  It has no plot, characters, or author bio.  But it’s one which I can spend hours with.  That book is a road atlas.

One of my favorite killing-time activities is paging through atlases, looking for interesting geographic features, roads, and especially, place names.

It’s fun to wonder why there’s a Mexico in Missouri or what’s so normal about Normal, Illinois. There are umpteen untold stories locked away in these names, many of which we’ll never know (without a lot of digging, anyway). 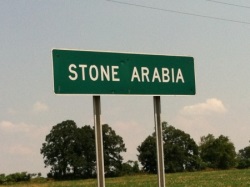 And with Amish living in over 450 locations in North America, many places Amish are associated with have interesting names.

First, a word on names.  When referring to a settlement, Amish typically call a community in one of a few ways:

In my experience the largest, most established settlements tend to go by county or regional names (Lancaster, Holmes, Daviess County), while smaller communities tend to take the name of a nearby town (Milroy or Union Grove), though that’s not a hard and fast rule.

You certainly have to get more specific when there is more than one settlement in a county, which happens often enough.

10 of My Favorite Amish Place Names

I have mainly listed the town names here, though I can’t vouch for whether or not that is exactly how Amish refer to themselves there.  That noted, I hope you enjoy some of these favorite names:

1. Crab Orchard, Kentucky  I have never visited a crab orchard.  Sounds dangerous.  This settlement in central KY has been around for nearly 20 years, so maybe it’s not that hazardous a place.

2. Lucknow, Ontario  “Lucknow” sounds like the wishful pleading of someone in a jam. “Luck!” “NOW!”  But being in Canada it’s probably pronounced completely differently than I think (“Looknah”?).  It still makes the list.  The second-largest Amish settlement in Canada.

3. Oblong, Illinois  “Oblong” has just always been a funny word to me.  I am guessing this town has an oblong shape?  Not exactly the most creative name, but there is a small Amish community somewhere around this town in Crawford County.

4. English, Indiana  These Amish have gone undercover.  Move right along folks, no Amish here, only English.

5. Philadelphia, New York  Towns which carry the names of better-known cities always catch my eye.  For instance there is a Nashville in North Carolina and a Paris in Maine (and many other states besides).  Were these the result of ambitious naming decisions, coming after the cities were established (most likely), or was there a crop of Nashvilles at one time and only one grew to prominence?

7. Kokomo, Indiana  According to the famous Beach Boys song, Kokomo lies “off the Florida Keys”.  That place is fictional.  This Kokomo is real, and Amish have been here for over 150 years.

8. Fertile, Minnesota  A name that seems “Amish” in every way.  One of the northernmost Amish settlements.

9. Diagonal, Iowa  Another shapey name.  It would be nice to know its origin.  Most of Iowa is east-west, north-south roads.  Maybe the roads in this town run diagonally.

I hope you’ll take a moment to add your favorite place names, Amish or otherwise, in the comments below.