Which is the best Amish baked good?

Yesterday, Don Burke left a comment on the “5 Favorite Amish Foods” post that comes close to capturing my own feelings: “you’re looking at a guy that thinks that Amish baked goods should be it’s own food-group — the foundational (and largest) group of the food pyramid.” Well-said, Don, well-said 🙂 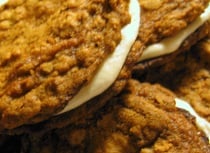 Which of course gets me thinking on Monday morning (the logical time to think cookies and cake, right?) of my favorite Amish-made or “Amish-style” baked goods.

I even find myself pondering a dramatic question: If I were stuck on a desert island and could only have one (yes, a very realistic scenario), which would I choose?

If you read the original 5 Favorite Foods post, you’re probably not surprised when I say I’m going with a pie.

However, the jury is still out on which. I’m going through my mental files of pies I’ve eaten as I try to decide. There are some good ones in there (I’ll let you know which specific pie in the comments a little later).

I’ll also throw it out to you – If you could only eat one Amish-made baked good, which would it be? Something sweet, or salty? A pie like me, or something else?