David Arment shares photos of syrup being made, along with the finished product, a remarkably dark syrup which I’m sorry I can’t sample over the internet somehow.

David explains: We lived on 15 acres of wooded ground. One of the local Amish guys asked if he could tap the trees. My wife told him “yes” if he would give us some syrup from his work.The first picture is his contraption to gather sap from the maple. 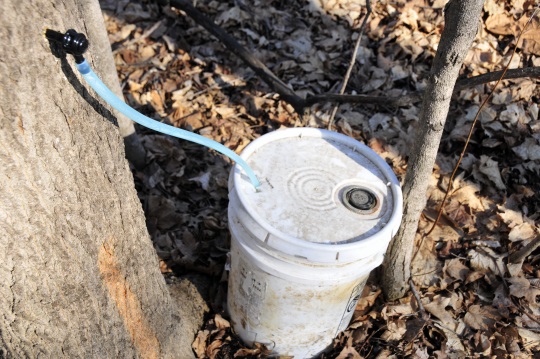 Pam (my wife) went and watched him boil down the sap… and that is the second picture. You can see the boiler is wood fired. 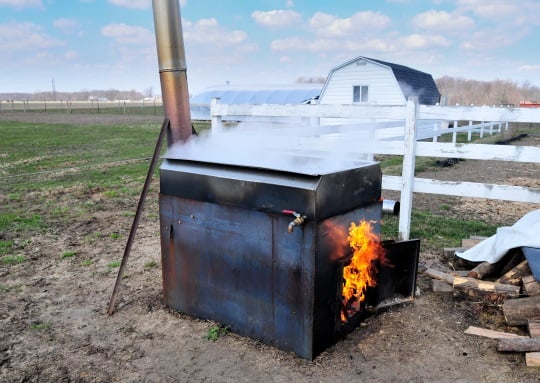 And finally the syrup. Says David:

Pam has the syrup people sell her the darker syrup. She says it comes from sap from the trees later in the year. 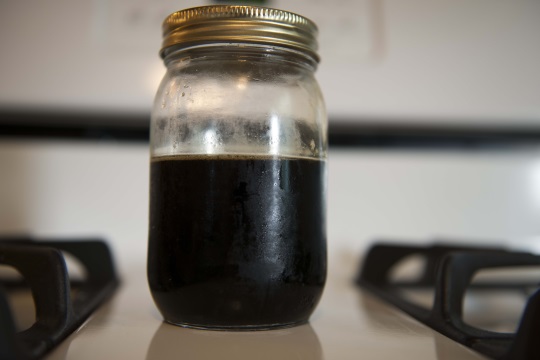 I thought it was from cooking it longer but she said that would increase the viscosity and that is not the case with her syrup. So I guess she’s right. Again.

You can see another syrup-related photo of David’s, of sap being collected in a local park.

Does anyone prefer the fake maple syrup to the real stuff?

It’s funny that some foods are that way–in rare cases, the fake version holds it own with the real McCoy (I’m thinking imitation crab meat, and possibly some fake cheese products–am I missing anything?).

I’m not sure that’s the case with maple syrup–for starters, the thicker, stickier mass-produced stuff almost seems like a different product entirely.

But it’s one I have to say I enjoy–maybe (and I hesitate to admit this) even more than the real thing 🙂 .