Have you ever watched Amish “reality” TV? This type of programming made its first big splash in 2004 with “Amish in the City”.

The series followed five Rumspringa-age Amish youth paired with a similar number of non-Amish young people living in a home in Los Angeles.

“Amish in the City” was just a precursor of what was to come. The genre’s heyday came about a decade later, exemplified by two shows: “Amish Mafia” and “Breaking Amish“. 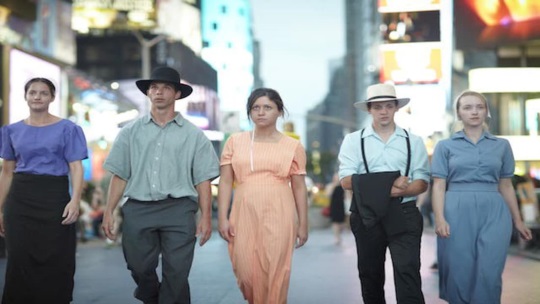 Both of these programs debuted in 2012, and ran for several years (“Breaking Amish” lives on, at least until this year, in the spin-off series “Return to Amish,” which has racked up five seasons to date).

These shows were criticized for fantastic plots, foul language, and inaccuracies. You could also add “scripted nature” to that list, but that is the norm for the “reality” TV genre.

Both “Amish Mafia” and “Breaking Amish” attracted outsized attention in the media, many followers, and no doubt a lot of money for the producers and networks which aired them.

Behind the scenes at “Amish: Out of Order”

A recent article on Medium (hat-tip to AJ for bringing it to my attention) addresses another show – which goes unnamed by the author, but given the details is clearly the “Amish: Out of Order” program, another series which also aired, for one season, in 2012.

It was done by the National Geographic channel (who had aired a stand-alone, similarly titled program called “Amish Out of the Order” a couple years earlier, and which I felt was pretty well done, having more of a documentary approach).

At the time of its premiere I noted that the new series had more of a reality-show type feel compared to the previous production. Mid-season, Mose Gingerich gave an interview to us here (Mose was one of the Amish youth in “Amish in the City,” and involved in both “Order” productions).

It turns out that was the case and the new program, contrary to its predecessor, was more in line with the “reality show” dynamic. 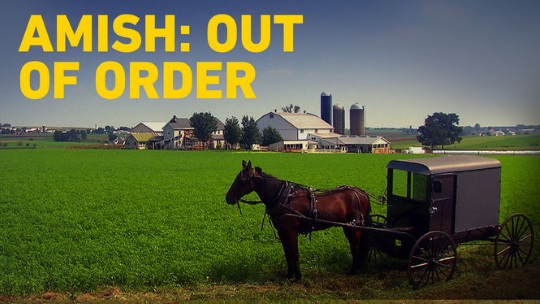 In “I Worked for an Amish Reality TV Show“, Claire J. Harris describes her work on the program as a low-paid production assistant.

Claire writes about the dynamic behind the show, and how she was bothered by the motives and methods of the show’s bosses. She describes how the young Amish-raised people recruited into the show were basically characters in a scripted drama, orchestrated from afar.

Claire admits that the producers “didn’t talk about ‘right’ and ‘wrong’ so much as what we could get away with. The common refrain around the production office was, ‘Well, the Amish don’t sue.'”

Though bothered by these aspects, being in the US on a visa and dependent on the work to keep her legal status, she found herself in an uncomfortable position, which made leaving the job difficult.

The show had a dilemma early on – the Amish youth were reluctant to speak much about the “juicier” topics needed to build tension and drive the narrative. This meant that the producers had to create drama through manufactured plotlines and scenarios:

By the time I arrived on the Amish show, it had already devolved into scripted television. There was a three-week turnaround for every episode and none of the Amish were doing anything that made for compelling television. Some had traumatic pasts that had caused them to leave their communities, but none were willing to talk about it. When they did talk, it was in a stilted monosyllabic way — after all, none of them were professional actors.

Instead, we manufactured drama. We pushed these Amish youths to encourage their other Amish friends to run away from their families. Then, we provided them with cars and filmed them going to steal away their friends in the dead of night. With a little fudging of dates of birth, we could make them legally consenting adults who didn’t need parental permission to appear on national television.

About the tactics needed to get the participants to perform:

The Amish didn’t sue as we tried to bring them into conflict with their families, putting them at risk of permanent excommunication. If they refused, we waved contracts in front of their faces, a callback to the legally binding documents that we’d made them sign, knowing they didn’t understand the fine print. They were teenagers with eighth grade educations who knew nothing about reality TV. We didn’t care what would happen to them after we left or how we fractured their relationships with their communities. They trusted us and we wanted ratings.

Ginning up drama was the show’s modus operandi, at least until a truly dramatic moment arrived, born of tragedy:

Cephas, the leader of the pack of troublemakers who thought that being on television was a waste of time, died in a car crash.

The camera crews weren’t around when he died. The Amish kids were reckless when it came to pretty much everything. They’d lost their communities, their identity, and in many cases, also contact with their families. They drove too fast and without seat belts. A 17-year-old cast member had already survived a major car accident that was featured in an earlier episode. We didn’t discourage this — on the contrary, footage was coming back to the production office from the back seat of cars being driven by ex-Amish teenagers racing along, well over the speed limit.

I came into the office to the news that Cephas had been killed during the night. The production team was already charged into story mode — scripting story lines around a dead teenager who had no longer wanted to be on the show.

Claire explains that “the producers expressed varying levels of sadness” at the young man’s death. Regardless, 19-year-old deceased Cephas Yoder became the emotional focus and “centerpiece” for the rest of the season.

Ironically, as Claire notes, Cephas had been one who saw little value in the medium, once telling a cameraman “You seem like a nice guy”…“Why would you work in anything as useless as television?” 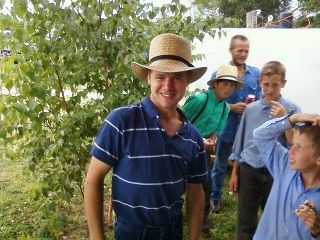 Claire describes many more details of how the show operated, and the internal conflict it generated, at least within her.

She was eventually given an offer to continue working with the company in a promoted position – on another “reality” show, about gypsies. She concludes:

The producer told me to come back to her with an answer. I spent a few days imagining myself as a reality television producer, my immigration status permanently tied to my job at the company. I saw myself confronted by the death of another “character” and simply getting on with the job of turning that tragedy into a story. To my surprise, it wasn’t hard to picture at all — I could easily see myself in 10 years time becoming someone who no longer knows the difference between reality and “reality.” And that terrified me.

Mose Gingerich later memorialized Cephas Yoder in a post on his blog.

I appreciate that she came out and wrote this article, though I don’t think what Claire has written here is especially surprising.

People knew that these shows, and reality TV in general, were produced and manufactured and the product which you ended up with tended to be quite distant from anything resembling “reality”.

It’s the nature of the beast – episodic programming demands conflict, drama, emotional arcs, and neat storylines tightly packaged in 45-minute chunks which somehow all tie together to create a storyline to keep an audience invested and tuning in across a 10-episode season.

What really comes through in Claire’s article is the emotional drain and mental gymnastics that must be needed to craft such a show.

Distance helps, as she suggests – being in a big-city production studio while your “characters” are a thousand miles away makes it easier when sketching out story arcs for these troubled young people’s on-screen lives:

I never met the Amish who worked on our show, and neither did the story producers, the people whose job it was to concoct this alternate reality. It was filmed in Missouri and we were in a production office in New York, busily plotting their future lives on pinboards, mapping out potential story beats, and molding their emotional arcs into something resembling a narrative.

Claire says that they claimed they were “documenting” Amish life – but admits that what they were really doing was “facilitating”.

I take Claire’s article as confirmation of what many suspected – or were sure of – in the heyday of Amish reality TV, when Lebanon Levi and Jeremiah Raber were making regular viral media headlines.

It seems that the peak of Amish reality TV programming has passed – at least for now. But, I won’t be surprised if we see another batch of shows in future.

The Amish are fascinating to many outside observers, and there are many who commendably take the time to learn about the people, their beliefs, and appreciate their way of life on more than a superficial level.

Rumspringa mythology and the excommunication dynamic, on the other hand, have the potential to draw the attention of a much larger audience.

Those are usually not the people interested in going much below the surface, but – importantly for the business model – are willing to reward manufactured drama with their time and attention.