Amish Mafia’s Fourth Season Will Be Its Last

I usually try to ignore “Amish Mafia” or “Breaking Amish“-related news, which tends to clog the news feeds whenever the shows are in season.

I am making an exception today to share the good news that “Amish Mafia”‘s upcoming fourth season, beginning February 10th, will be its last. 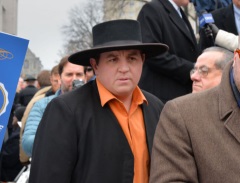 According to Lancaster Online, “show attorney Steve Breit revealed that the upcoming season would be very different from past ones, with the cast tackling the Pennsylvania governor’s race, as well as the increasing negativity that had been creeping up with the show in Lancaster.”

The two popular Amish-themed “reality” programs have received a fair share of backlash since they made their debuts in 2012, including articles debunking Amish Mafia and non-Amish speaking out against “Amish exploitation”.

The things you learn from “Amish Mafia”…

By the way, I somehow got sucked into visiting the “Amish Mafia” website, and learned some interesting things via a “fact generator” feature on the website.

According to the Amish Mafia site (these are all direct quotes):

I actually found that pretty entertaining in its own way. For a lot of these, you can imagine the kernel of truth that each “fact” grew from.

I think my favorite is the description of bundling. What do they use? Tin foil? Saran wrap? Wrapping paper? Does it take an entire team of Amish people? Pretty funny visual image in that one sentence.

There are actually a couple of other programs currently airing.

One is called “Amish Haunting“, which consists of re-enactments of ghost stories which supposedly circulate among the Amish. I didn’t realize there was such a strong supernatural tradition among the Amish as the show’s intro would have you believe.

The other is named “Amish RENOgades“. The “RENO” bit looks as it does to indicate this is a home improvement program, following two Amishmen (or maybe just one, since one of them drives) as they traverse the country doing renovation projects for homeowners.

I’ve only watched a little of either of these. From what I saw, each seemed silly in its own way (though RENOgades seemed like it might be interesting for home improvement buffs). Any comments from those who have seen either?