Here are the top ten Amish states, according to 2014 figures from the Young Center for Anabaptist and Pietist Studies at Elizabethtown College.

States with the Largest Amish Populations

1. Ohio – Two of the four largest Amish settlements (Holmes County and Geauga County) are in the Buckeye State. Ohio also has the most individual settlements, with 55.

2. Pennsylvania – Pennsylvania’s Amish population is estimated to be nearly identical to Ohio’s (67,230 vs. 67,045). The only surviving settlements dating to the 1700s–three in total–are in the Keystone State.

3. Indiana – The next state on this list, Wisconsin, has over twice as many settlements as Indiana (21 vs. 47). But Indiana has a lot of large communities–five of them have over 3,000 people (with the largest over 20,000). Indiana is also home to the largest Swiss Amish population. 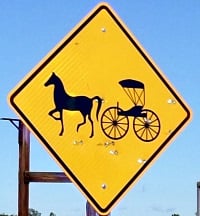 4. Wisconsin – After the big three of Ohio, Pennsylvania, and Indiana, the numbers drop off quite a bit–from over 50,000 Amish in Indiana to around 17,000 in Wisconsin. One-third of Wisconsin’s roughly 4 dozen communities have been founded since 2000.

5. New York – New York’s oldest Amish settlement is not really that old – 1949 – but Amish have really liked moving there in recent years. Around 2/3 of its 50 communities did not exist prior to 2000.

6. Michigan – Over 13,000 Amish in 40 settlements, from southern Michigan all the way to the Upper Peninsula. Centreville (St. Joseph County) is the Wolverine State’s largest and oldest Amish location.

7. Missouri – The Show Me State has shown itself a good place for Amish to settle, with over half its 40-some communities created this millenium. The last state on our list with at least 10,000 Amish (Missouri has around 11,000).

8. Kentucky – Home to one of the fastest-growing Amish settlements, at Munfordville. Around three-dozen Amish locations, few of which are in the Appalachian region of the state.

9. Iowa – Kalona is the Hawkeye State’s largest and oldest settlement (around 1,500 Amish; founded 1846). Amish have clustered in two areas: the southeast/near the Missouri border, and in the northeast.

10. Illinois – Over half of this state’s approximately 7,000 Amish live in one community – Arthur.

Bonus: Number 11 is not a state – it’s Ontario, with an estimated 4,860 Amish. Ontario is followed by Minnesota, Tennessee, Kansas, and Delaware to round out the top 15.

For more on where the Amish live, view our 2014 Amish population infographic.