I compared statistics from the 2003 Amish Settlements Across America by David Luthy with numbers from the 2012 Raber’s Almanac to come up with a list of 5 fast-growing Amish settlements over the past decade.

Past calculations have found the Amish population to double roughly every 18-20 years;  these communities would be exceeding that, some by a significant margin.

Why “fast-growing” and not “the fastest-growing”? There are 3 caveats- 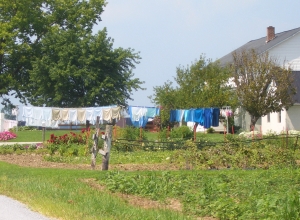 a. I only looked at settlements that were at least 4 districts in size in 2003. There may be smaller, less-established settlements that are technically experiencing a higher rate of growth.

b. Districts can vary in size. For example, for its calculations the Young Center estimates that districts in Holmes County, Ohio are 130 people in size while those in Lancaster County are significantly larger at 165 people.

c. Raber’s is not always updated so its information is not quite as reliable as other aggregate sources (ie ASAA or Young Center).

Given all that, it’s still safe to say the following 5 settlements are among the fastest-growing Amish communities over the past decade:

Why do some communities grow faster than the average?

Some are seeing a lot of people moving in from other places–for cheaper farmland, for a more traditional community, etc (see reasons Amish move).

The % of youth who join the church, and defection of baptized members also influence growth.

Finally, some are simply having family sizes larger than the 6-7 child Amish average.  For instance, families in the Berne settlement average 9 children per family (see An Amish Patchwork p. 80).