Where do the Amish live?

The Amish Population in 2014 (Infographic)

No surprise here: the Amish continue to grow at a gallop. With a population that doubles roughly every 20 years, the Plain sectarians are on pace to cross the 300,000-person threshold within the next year or two.

As of 2014, the Amish have set up shop in 30 states (plus Ontario), from traditional strongholds such as Pennsylvania and Indiana to more recent communities in Colorado, Maine, and Tennessee.


Infographic by amishamerica.com. Data: The Young Center at Elizabethtown College

Three states have long been home to large numbers of Amish.  Pennsylvania is most closely-associated with the Amish, home to their oldest communities as well as their best-known (Lancaster County). Ohio, similar in size to Pennsylvania with over 65,000 Amish people, lays claim to two of the top four largest settlements–Holmes County and Geauga County. Indiana is covered with Amish communities from top to bottom, from the large northern settlements of Nappanee and Elkhart/Lagrange County, to the sizeable Daviess County settlement in the south. 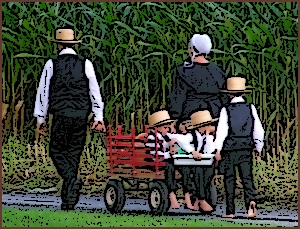 Together, these three states account for nearly two-thirds of the total 2014 Amish population of 290,090.

Amish have found a number of other states attractive, as they’ve faced pressures in traditional locales including high land prices and overcrowded communities. Wisconsin hosts the fourth-largest Amish population, spread over nearly four dozen communities. Amish have flocked to New York in droves in recent years, with ten new settlements appearing in just the past three years. States such as Kentucky, Michigan, and Missouri have also long had robust Amish populations and have seen new communities arise recently.

Amish have also set out to found communities in less traditional areas of the country. States such as Colorado, Maine, Texas, Montana, and Tennessee have seen Amish relocate within their borders. Additionally, a number of states have long-standing Amish presence, though they don’t attract much new settlement. These include North Carolina, Delaware, and Florida.

While some Amish communities are home to thousands of people, Amish preserve a close-knit society by intentionally keeping their church communities small. Church districts, typically of 25-35 families, are geographically-based areas comprising neighbors who worship together on a bi-weekly basis. Amish religious service differs in a key way from most other Christian churches: Amish do not build church buildings, instead opting to hold church in the home. 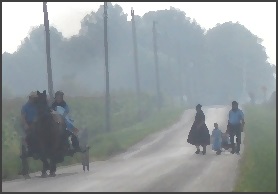 When church districts exceed a certain number of families, Amish will prepare to divide the church.  New church boundaries will be drawn up, and new ministers will be ordained for the new congregation.

How large will the Amish population grow? A number of factors could alter the current rate of growth, and may even lead to population losses as Amish move to other churches or leave the faith. At various times throughout their history, religious movements have attracted significant numbers of Amish to different churches.  Scattered Amish continue to leave their faith for other churches, though in relatively small numbers.

The attraction of taboo technology is another factor drawing some Amish away. While the idea that the Amish are “frozen in time” with regards to technology is false–Amish do adopt, and adapt, new technologies over time (solar panels, and propane-powered refrigerators are just two examples)–some devices, such as the car, remain off-limits.

A difficulty in making a living via traditional agriculture may make remaining Amish challenging for some. However, despite only having an eighth-grade formal education, many Amish have found success in alternative occupations.  Business ownership has been a key area of growth for the Amish, who have had success in fields including construction, furniture-making, craft work, and manufacturing. Amish also work in non-Amish industries–a good example of this is the RV industry of northern Indiana, which employs thousands of Amish men in the dozens of recreational vehicle factories throughout the region. 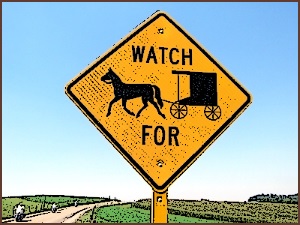 The Amish birth rate may also decline.  Though Amish typically have from 6-8 children, the number can vary greatly across different communities (Amish of different affiliations vary in how progressive or conservative they are regarding technology and other aspects of life). Researchers have discovered that Amish women may average as few as 5.5 children in some communities and over 10 in others (see The Amish,  Kraybill, Johnson-Weiner, Nolt, p. 157).  As some Amish become more progressive in their outlook and receptiveness to birth control–otherwise taboo in the community–family size may decline.

At current growth rates, Amish should cross the one-million population mark by the year 2050.  The horse-and-buggy, plain clothing, PA Dutch language, home worship, and limited technology are core elements to Amish identity.  Amish strive to preserve these while slowly adapting around the edges as financial and societal pressures dictate. As general society changes and the Amish evolve while striving to preserve tradition, the Amish of 2050 will likely look different than their counterparts of today–though it’s hard to say by how much.


Find an Amish community in the Amish State Guide