The 3 Biggest Mistakes People Make When Talking About The Amish 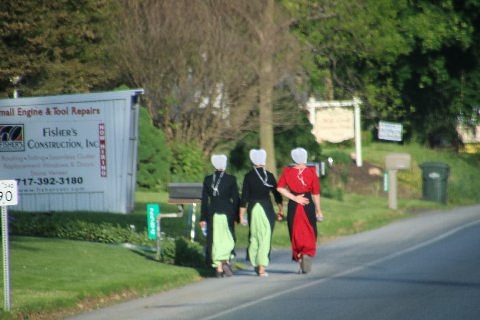 Running this website for nearly nine years, I’ve had the privilege to not only learn about the Amish–but also observe how the rest of us talk about them.

The Amish certainly generate a lot of discussion across the web and elsewhere. But since they are not the most accessible group, sometimes–often–the discussion is not what it could be.

Below, I share what I think are the three biggest errors people make when discussing the Amish.

I should say I appreciate our readers and commenters here–who have also helped me learn much over the years.

I see much more of this elsewhere, though it also pops up sometimes here as well (and I know I’ve been guilty of at least one or two of these in the past 😉 ).

1. Assuming the way “your” Amish do something is how it works everywhere

I’ve observed that often people take their own personal experience with Amish people, and apply it to all Amish. And this seems to be more common with negative situations.

For example, if one group of Amish is behaving counter to what a person believes or expects from them, then all Amish might be painted as “hypocrites”.

There are many examples you can probably think of–including on how Amish use technology, their material life, or religious practice. There are certainly consistencies, but the Amish are diverse.

We get to know our local Amish as friends, neighbors, and at times, adversaries. But sometimes we mistake a depth of knowledge for a breadth of knowledge.

Two sides of the same coin. The Amish evoke emotions on both ends of the spectrum. But as Amish people have pointed out on this site and elsewhere, they are just people too.

Why are Amish both romanticized, and demonized? First, there are some very attractive characteristics about Amish life in general.

We observe individual aspects of how Amish live–the strong family life, simpler material possessions, etc–and compare them to our own lives. If something is weak or missing completely in our own lives, it just makes the Amish, or our perception of them, that much more attractive.

On the other hand, there are aspects of Amish life which disturb modern people in 21st-century Western society–including their eight-grade schooling system, farming practices, and the role of women.

And there is also the behavior of individuals. Sometimes when an Amish person acts a certain way, his behavior is conflated to become “Amish behavior.” People assume that the way one member of a group does something, represents how all do something.

It’s easy to see how focusing on either of these sides of the coin can lead to a picture much rosier or darker than reality.

Somewhat similar to point #1, but not exactly. I’m borrowing this one from an Amish friend, who made the point that there are so often exceptions to the way the Amish do things.

There is often a nook or cranny of Amish society where things are done just a bit differently in a community or church. For example, there are a few Amish churches who use meetinghouses for Sunday worship, though the vast majority–98%? 99%?–do not.

Or, a rule or custom might “shift” based on a situation. For instance, Amish builders use conventional power tools on the jobsite…which they would not use at home. Or, it’s nearly true to say “the Amish never fly.” But one exception there would be in an emergency, when someone needs a helicopter LifeFlight to a distant hospital.

Finally, since “the Amish” are comprised of 300,000+ individuals, individual actions sometimes thwart the standard Amish practice. And occasionally, exceptions are made on an individual basis–such as allowing an otherwise forbidden technology for someone with a health issue.

“The Amish never” and “the Amish always” may still be useful for some things. You do have to generalize sometimes in discussion, in order to not get bogged down in nuance. But those two statements apply in fewer cases than we might think.

What do you think? Agree or disagree? Any others?