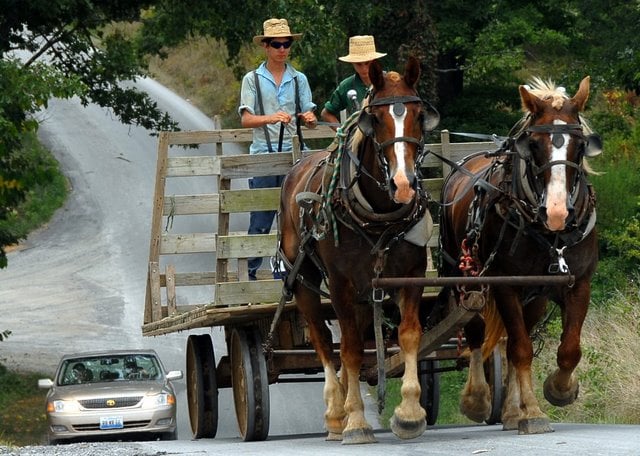 From Lancaster, Pennsylvania, through Ohio and Indiana and on out to other long-established settlements in Illinois, Iowa, and Kansas, we tend to associate the Amish with the nation’s middle latitudes.  Since their earliest years in America, the Amish have gravitated to the cooler climes of these corn and dairy regions.  However, the Amish have also had a long history of attempting to settle America’s southern states–sometimes successfully, sometimes less so.

In the early 1900s, Amish groups made numerous attempts to settle in Alabama, Georgia, Mississippi, Arkansas, and other southern locales.  During this same period, four separate communities existed in Texas, three in Virginia, and some adventurous Amish even made a go of it in North Carolina’s Dismal Swamp.  And in the mid-1800s, an atypical Amish community existed in New Orleans.

Today, we find the heaviest ‘southern Amish’ presence in Kentucky, with around 60 church districts.  If we count the southern third of Missouri as belonging to Dixie, as many locals do, that would add significant settlements near Springfield and smaller ones scattered throughout the region’s rural counties.

Heading further east and south, Tenessee clocks in at nearly a dozen church districts, according to the Young Center’s Amish Studies site.  Virginia is home to a handful of one-district settlements.  North Carolina, Mississippi, Texas, and Florida all contain a single district today–in North Carolina, a New Order community, and in Florida, the unique Pinecraft settlement. 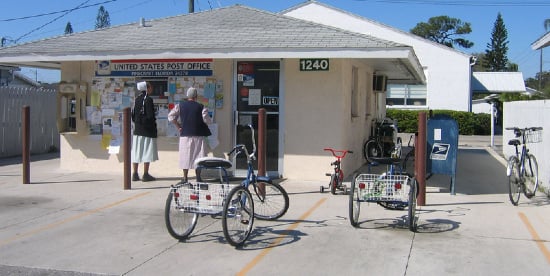 A couple of Amish America readers share some local knowledge on two of these settlements.  William says the community near his home in Mississippi, which uses steel-wheeled carriages and avoids propane and gas lights, is of the Swartzentruber affiliation.

According to a local newspaper article, the approximately two dozen families originated from Tennessee, and came in search of affordable farmland.  A landowner made an attractive offer, and the original group moved in during an ice storm in the mid-90’s.  William says that there are a few furniture businesses, but that many of the men are involved in the local lumber industry.

Texas seems an odd spot for the Amish.  Yet a small group is making a go of it in the southern part of the state.  Reader OldKat recently paid a visit.  Conditions in the area sound pretty rough, especially when stacked up against, say, the lush hills of the Garden Spot, aka Lancaster County.

OldKat says that the community inhabits a flat, nearly treeless plain.  The area can experience both drought and tropical storm rainfall.  The Amish rely on drip tape irrigation to water crops and produce.

Despite the harsh surroundings, he says that the Amish are set on expansion, making plans to purchase more land.  An entrepreneurial spirit exists in this community, with most of the dozen or so households operating some sort of home business, including beekeeping, produce farming, and horse training.  The community speaks what they refer to as ‘Swabbish’ or ‘Swiss’.

They’ve also got what sounds like a bustling combination general store, tack and carriage shop.  They sell produce, shoe some of the area’s many horses, and makes buggies for non-Amish as well.

OldKat shares that these buggies even come in non-standard colors, though you’d best pay heed when ordering one in an unusual hue.

Apparently they’ll make it, but as OldKat relates with a wink, the uglier the colors you choose, the bigger the deposit they require.  And the Amish who run the place have a sense of humor.  A recent request for an orange-and-white contraption supposedly required special conditions.  “Better make that paid in full, right up front!  Couldn’t sell a surrey painted up like that if we had to,” said one of the men.  Apparently these Amish are neither Texas Longhorn fans nor followers of Sam Houston State, as OldKat found out.

Sources:  Raber’s Almanac 2008 edition, Amish Studies website of the Young Center at Elizabethtown College, and David Luthy’s The Amish in America: Settlements that Failed 1840-1960.  And thanks to William and OldKat!