No, I Won’t Say Cheese 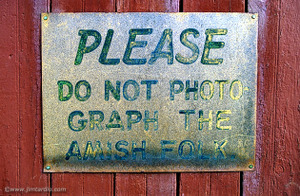 But not by everyone.  Or at least it’s not respected by everyone.  Tourists can still be a problem, frustrating the Amish and even causing accidents.

The Amish believe posing for photographs is a form of pride.

Reporters dealt with the issue, some tactfully, others less so, while covering the Nickel Mines incident last year.

There are exceptions to the no-photos rule, however.

Donald Kraybill and Steven Nolt relate this humorous account about an Amish business owner in Amish Enterprise:  From Plows to Profits:

Occasionally, youth will appear in advertising photos because unbaptized children are not bound by church regulations.  In one case, an entrepreneur’s children were in school when the photographer arrived to shoot a brochure.  Undaunted, the manufacturer went to a neighboring Amish family and borrowed their preschool children for the shot.

The authors go on to acknowledge that most Amish businesses’ promo photos appear without people in them.

One Amish family, lacking standard photo identification, once told me about some fairly serious hassles when crossing the Canadian border.

Others don’t have such a problem with using photo IDs.

New Order Amish seem to be the least troubled by the photo ID issue.  They generally seem to allow it, some of them even having passports and traveling by plane.

Plane travel is usually a no-no too.  But that’s another post altogether.

Read more on Amish and photos.