Getting my kicks in Lancaster County, PA 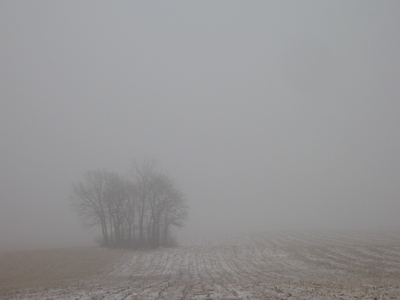 Well, despite the inclement weather, I managed to get up to Lancaster County and to my friends ‘Daniel’ and ‘Mary’, where I’ll be staying the next few days.  The last hour-and-a-half or so, from the PA line onward, was pretty hairy, as snow and ice accumulation made driving tricky.

I pulled in late Tuesday night to Daniel’s, happy and relieved to see the kitchen gas-lamp still burning.  Daniel sat at the table, playing with the youngest child, a 14-month old girl.  The rest of the tribe, save Mary, were already fast asleep.

Daniel set me up in the basement, which sounds cold, but is probably the warmest spot in the house–that’s where the coal oven resides.  Before hitting the hay, Daniel pointed out the large reserves of canned food the family had been going through that winter. 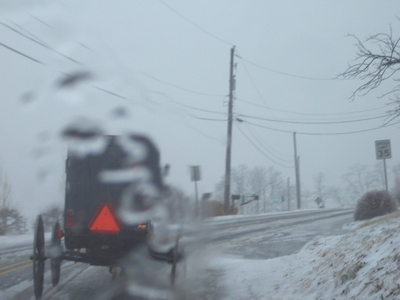 Pickled cauliflower, beets, ‘snitz’, canned meat, and all sorts of home-grown treats lined a full wall of the basement.  Being February, a good chunk of the eatin’ had been knocked out already, as evidenced by numerous empty Mason jars, but quite a bit remained.  Good, because I planned to be hungry.

Yesterday morning (Wednesday) my jobs were:  udder-cleaner and silage-sweeper.  I learned that some cows don’t like me–or at least cows that haven’t gotten a chance to know me, don’t like me.

More than a couple took kicks at my hands as I attempted to ‘strip’ them.

That sounds more exciting than it is–it’s actually something like priming the pump, before the mechanical-suction milkers get put on.  A squeeze or two to get the milk going.  Or actually, I think it’s more a pull.  Or maybe a combination of the two.  Daniel’s son ‘Tim’ explained that cows are often a bit jumpy if they don’t know you so well.  Well, I aim to make friends this week.  I will learn to strip you, cows. 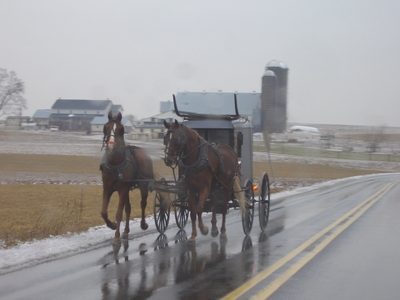 Today I graduated to manure-sweeping duty, and also got to pass out food to all the hungry cows.  It was nice making them happy.  Some were impatient and tried to steal from the bin.

While sweeping up manure, members of Daniel’s family offered up encouragement.  ‘It’s looking good Erik!’, ‘You’re doing a good job!’  This significantly helped my self-esteem, and for that I am grateful.  If all else fails, at least I know I can sweep manure to a satisfactory level.

Daniel’s 8-year-old son ‘Elmer’ and 12-year-old daughter ‘Lizzie’ then commandeered me to help out with their respective tasks, feeding the chickens and pigeons, and distributing milk-substitute to the calves.

The youngest calf, a snow-white fellow just a week old, needed some encouragement.  We had to chase that little guy down and force his head into the bucket.  He really resisted, but once we got it in there, he gulped milk like that was what he’d really wanted to do all along.  Funny approach to eating.  Lizzie, who seems to make a pretty good boss, paid me with a Valentine’s Kit-Kat bar after breakfast, saying I did a good job. 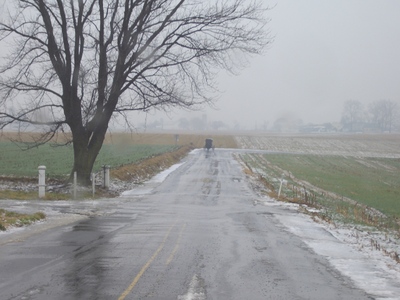 After some errands with Daniel, we headed back home and somehow I ended up plastered on the couch for an unplanned hour-and-a-half nap.  The 4am-and-up schedule takes a few days’ getting used to.

On rising, I stumbled upstairs to find Mary and ‘Bena’, the oldest daughter, at work at the kitchen table.  Bena was writing a letter to a friend that had missed a social event the day before.

Mary was busy at work with her prayer-covering.  She had earlier ironed it, and was now doing what she called petza–pinching, she explained.  This petza process, which requires a pick-like metal tool, apparently helps to maintain the Lancaster prayer-covering’s distinctive heart-shape.

‘This is probably something new for you,’ said Mary.

‘I’ve never worn one of those…yet,’  I replied.

Mary seemed to get a kick out of that.