Do you believe in miracles? Ohio Amish church member Rebecca Miller describes the following dramatic story as “a true happening here in the community.”

She notes that “I took the liberty to change names to protect identity and took a writer’s liberties to add minute details to get a better story line. I heard the original event by word of mouth, so I embellished it slightly but the main story plot is totally accurate.”

Maybe you’ve had something unexplainable like this happen in your life. Even if you haven’t, I think Rebecca’s final question is one to always keep in mind.

It was a chilly late spring afternoon. Caleb Troyer and his four young sons headed out to fix fences around the meadow which contained a small farm pond. Because of this pond, Caleb was reluctant to take little Christopher along, but after a bout of tears and promises from the older brothers to watch him carefully, he instructed 16-year-old Marlene to dress him for the outside.

As Caleb’s wife Martha washed the lunch dishes, she watched thoughtfully as her hubby and four sons headed out. Thirteen-year-old Michael, with his hands full of tools, almost matched his father’s height already. Ten-year-old Eric and five-year-old Andrew each had hold of little Christopher’s hand as they crossed the barnyard and headed down the field lane. “How blessed I am,” she thought, “with the family God has given me.” After clearing away the dishes she and her daughters went on to other jobs. 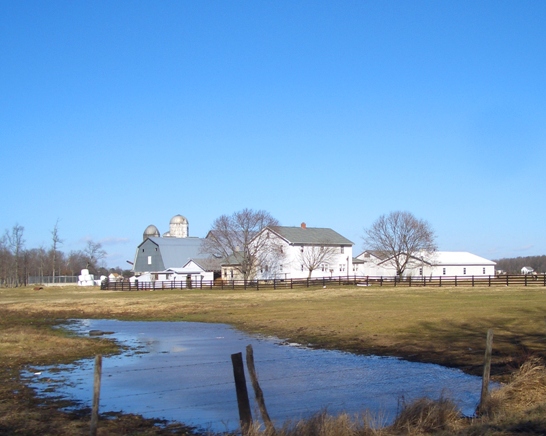 Meanwhile out in the field all was going well, with Michael assisting his dad while the younger boys played beside them. Suddenly Caleb looked up. Where was Christopher? His head turned immediately to the little pond. NO! There was Christopher floating on the water.

Caleb, quick-thinking man that he was, kicked off his work boots as he ran and dived in and grabbed his dear little boy. After the rescue, he gathered him up and with his other sons following close behind headed for the shop/garage–the nearest warm building. The boys, clearly shaken, were very quiet. “Quick Eric,” he instructed, “run and get Mom and a blanket.”

Meanwhile, he stood close to the stove and cuddled his little son with the older boys looking on. His father heart faltered within him to think how easily this could have ended differently. With praises to God he gazed at his young sons. Michael appeared on the verge of tears. Comforting him, he said,”Don’t worry, Christopher is OK.” This broke the dam. Between sobs Michael cried,”Dad, I’m so sorry- it was all my fault, I should have been looking.” Putting his arm around his older son he assured him that the fault lay on himself, too. “But, son, let’s thank God for keeping him safe.”

By now Mom had entered the shop and clutched her baby to herself. Oh, the thoughts that went through her mind as she lovingly removed his wet clothes and wrapped him in the blanket, leaving her hubby to comfort his other sons who each thought it was their fault, because they had promised to care for him. She was so thankful that Marlene had dressed him in his little puffy coat with the insulated lining even if it was barely cool enough for it. That seemed to be what had kept him floating–it had puffed up, acting as a flotation device.

Fast-forward to the next morning (meanwhile I’m sure little sonny was well looked after and many a thankful prayer wafted upward).

Martha was gathering the laundry for her daughters who were getting an early start. After gathering everything else she thought of Christopher’s wet clothing out in the shop. So she went to get it, but she couldn’t find the coat. So she headed back inside to talk to Marlene. Marlene got a strange look on her face when Mom asked her if she knew where Christopher’s coat was.

“Mom, it’s in the closet, I didn’t put a coat on him yesterday morning, only his sweatshirt and cap.”

“But, Marlene, I removed his coat and it was all puffed up and I thought, that’s what saved him.”

“Mom, I know he was not wearing a coat when Dad took him out.”

“Let’s go check the closet,” Mom suggested. And there was the little coat that was supposedly lying in the shop, damp and smelly–hanging in the closet, warm and dry.

So, this leaves us with the question: Who put that coat on little Christopher? And how had a wet, smelly coat become clean and dry overnight, hanging in the closet?

Do you believe in miracles and guardian angels? I definitely do, and I believe that little Christopher’s family does too. There is absolutely no other way to describe this happening, which truly did occur here in Holmes County this spring. If it gives you goosebumps to read this, believe me I got goosebumps the first time I heard the story and again writing about it.

I’m sure that little Christopher got a few extra hugs and kisses from his parents and siblings over the next several days. Why is it that we need to almost lose something before we fully appreciate what we have?