A 17-year-old Amish girl was rescued Thursday from atop her buggy during a flood in Wayne County, Ohio. From the Massillon Independent:

Brewster Fire Department personnel rescued the 17-year-old girl who had been driving the horse-drawn buggy, which had been swept into the high water along the rural roadway.

According to Lt. Roger Carpenter of the Brewster Fire Department, the teen was sitting atop the buggy as rescuers arrived at the scene shortly after 5 p.m. She was not injured and was checked by an ambulance crew.

“I’m fine, just cold,” the teen said as she exited the raft prior to being escorted into an ambulance parked a few feet from where water met the road.

A handful of medics had reached the girl utilizing a motorized raft and escorted her to safety. She was trapped in a water-covered ditch along Alabama Avenue, between Smith Road SW and Wynncrest Street SW.

Rain and melting snow had caused the Sugar Creek to rise and flood neighboring areas. The water where the girl was found was close to five feet deep.

Temperatures were cold – measured at 28 degrees at 5pm at the nearby Akron-Canton airport – which may not have been the exact temp at the time and place of the rescue, but it wasn’t a warm day. High winds were blowing at the time. 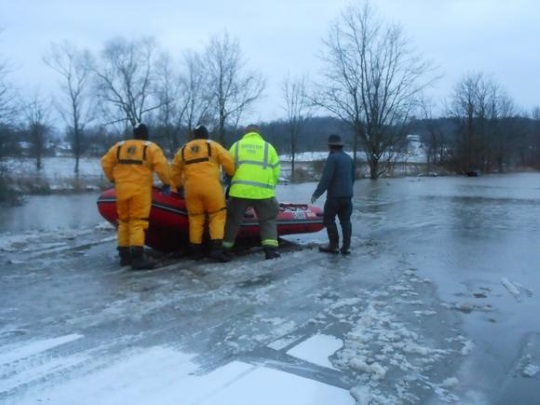 Unfortunately, they horse died as a result. “With cold temperatures and water, the muscles (of the horse) seize up. And it’s hard to overcome,” said Lt. Carpenter.

I’ve heard of rooftop flood rescues and rescues from cars, but this is the first time I’ve come across a buggy rescue. Good that this potential tragedy ended well, at least for the girl.