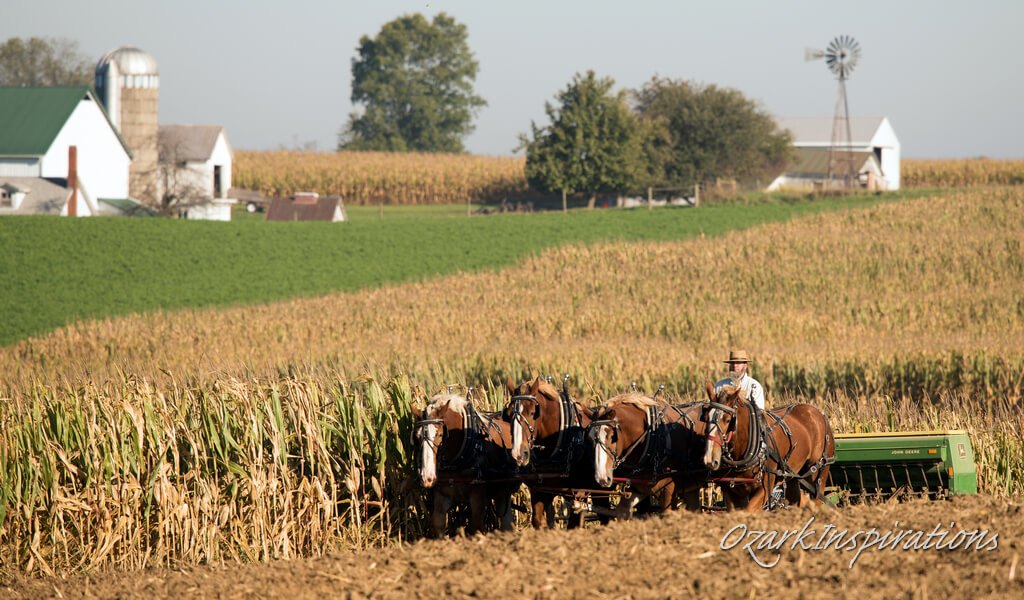 We’re back with part 2 of a two-part Q & A with Don Burke on his Amish photography. If you missed part 1 you can catch up here. In this part Don shares how he chooses which communities to visit, what he’s learned from taking Amish photos, and more.

Amish America: Have you ever gotten anything unusual or unexpected while taking pictures?

Don Burke: Oh yes – quite often. Especially with the “drive-by” pictures I often find Amish items in the yard that I hadn’t noticed before. 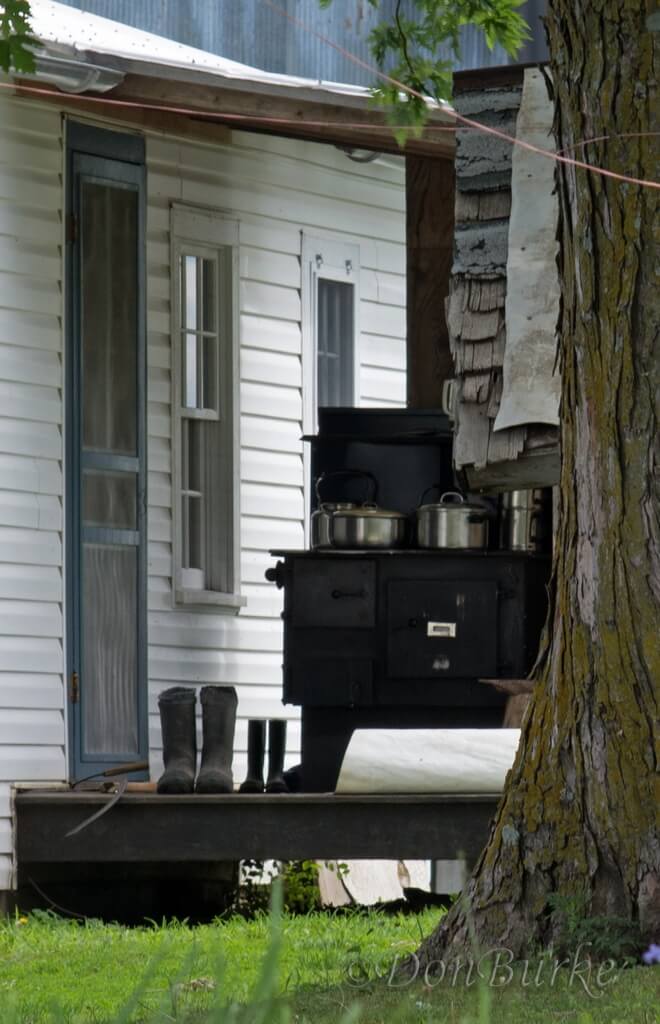 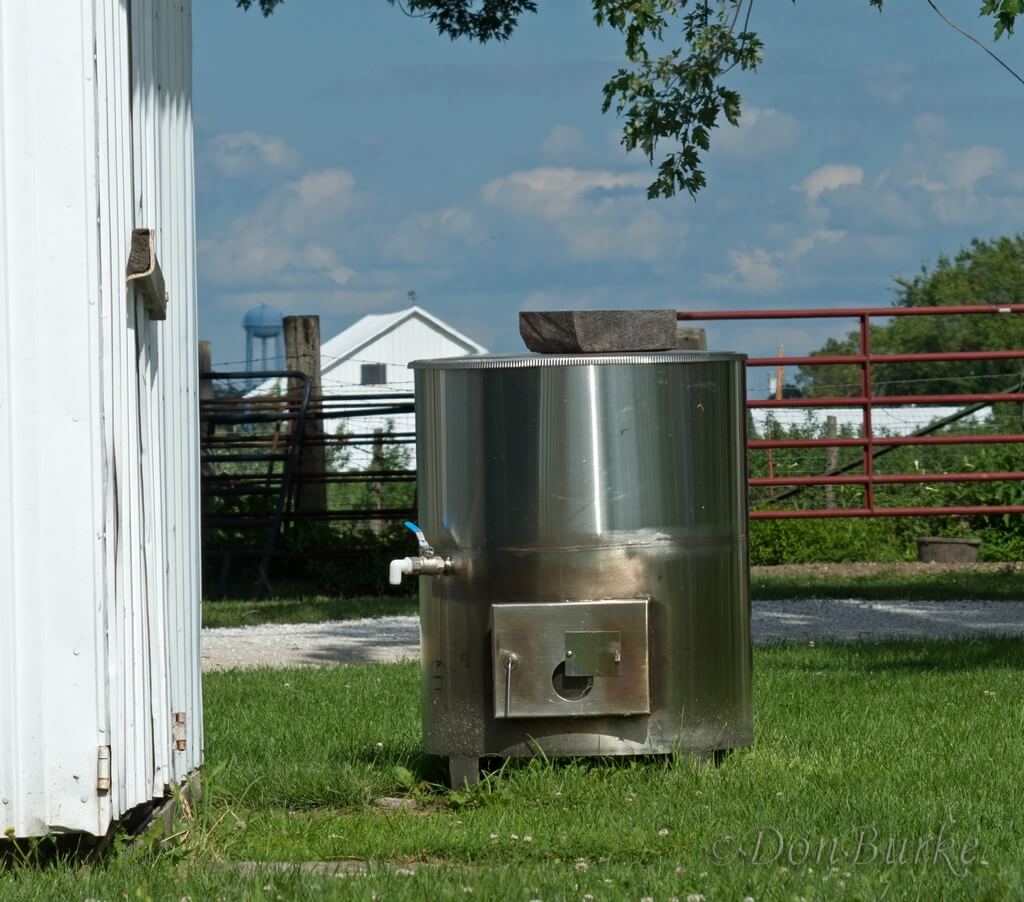 And Amish kids – playing in the yard, peeking out windows of a buggy – are regularly a surprise to me when viewing pictures once I’m back home. And occasionally even adults who were tucked away in a corner or shadow I didn’t initially see suddenly appear when I view the pics onscreen. 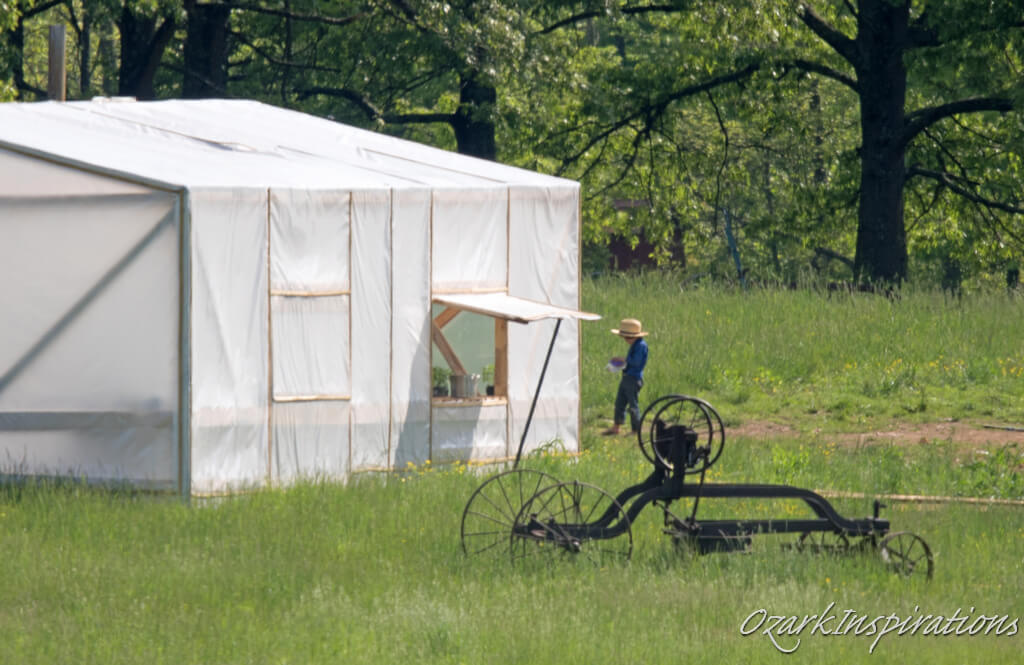 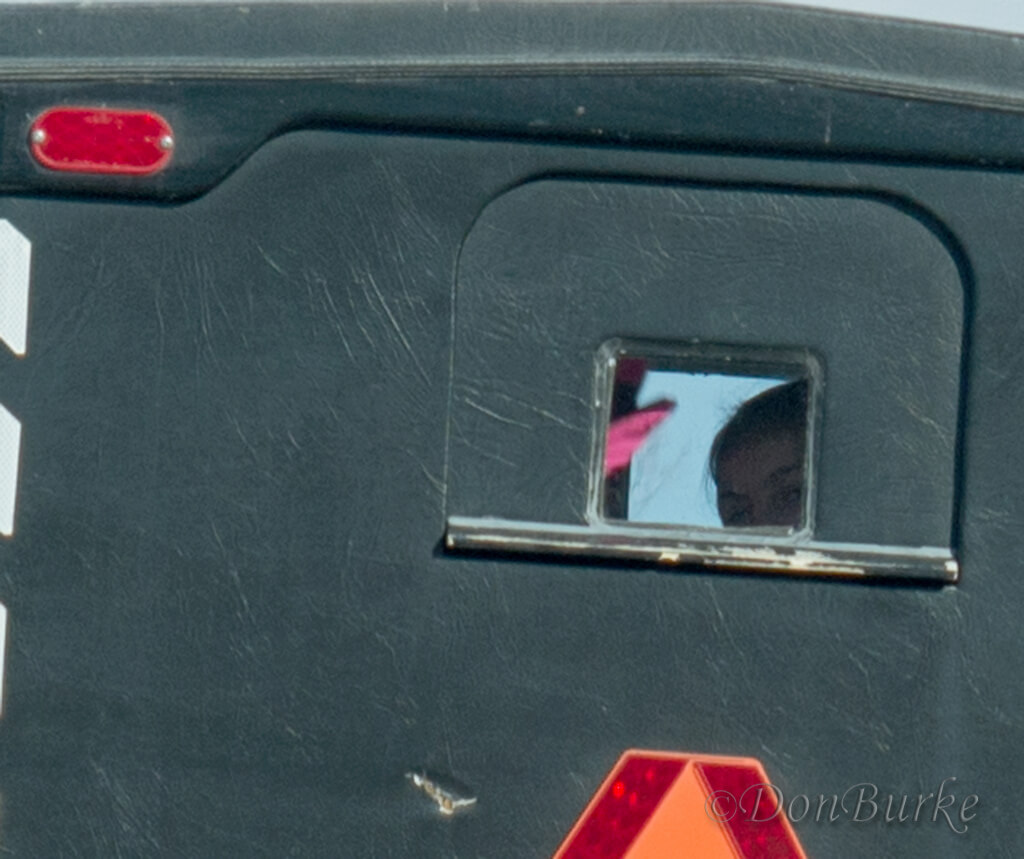 Among the “unusual” things have been some of the novel ways the Amish adapt to live within or work around limitations of their lifestyle. 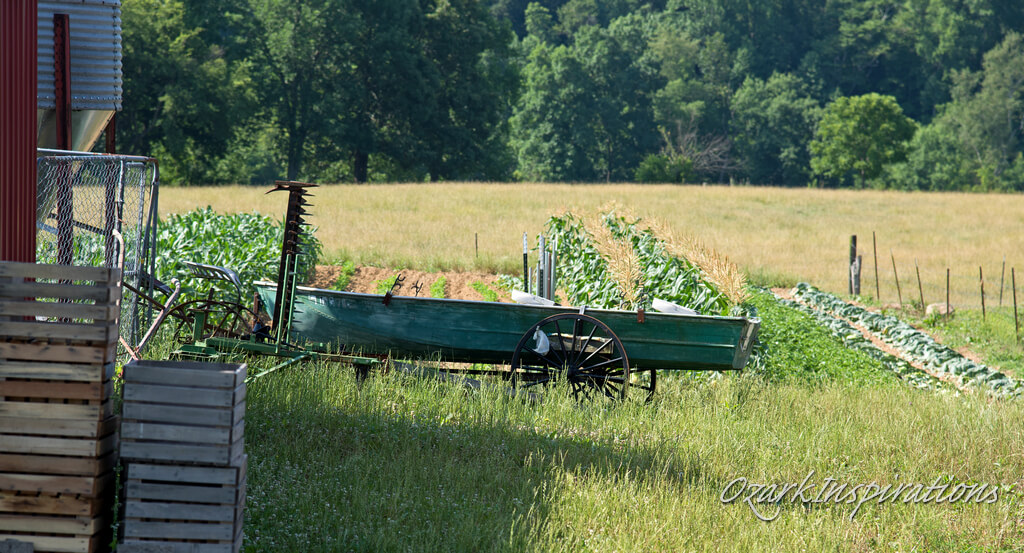 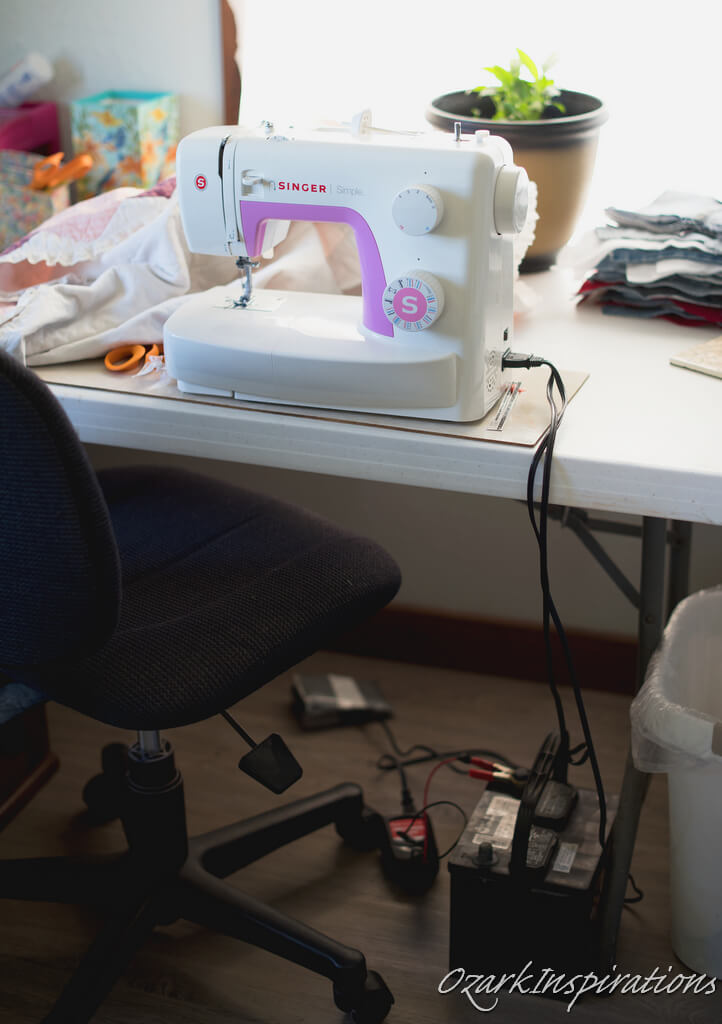 At times I’ve been surprised by the technology allowed/used in some areas. 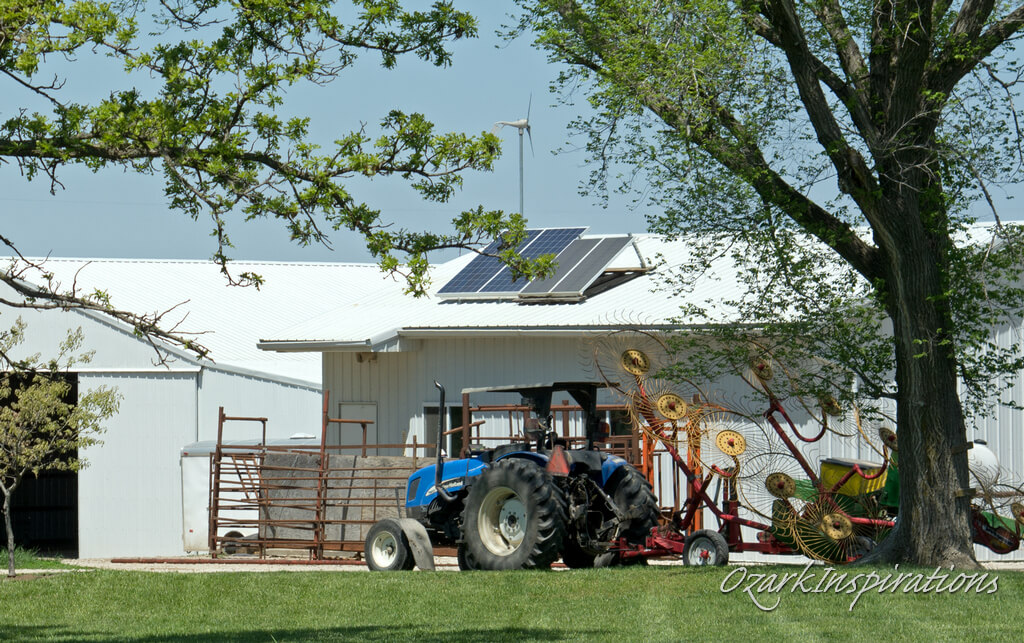 On at least two different occasions (Shipshewana (IN) and Holmes Co. (OH)) I’ve taken pictures of an Amish family that had bought an automobile, to be driven by one of their youth on Rumspringa. I was totally surprised by that.

Sometimes the unexpected is not so much a surprise captured in a picture, but an unexpected experience. I’ve been surprised to see steam rolling off of a team of horses in the frigid 3° February temperature as they pulled a wagon into the local Amish auction. 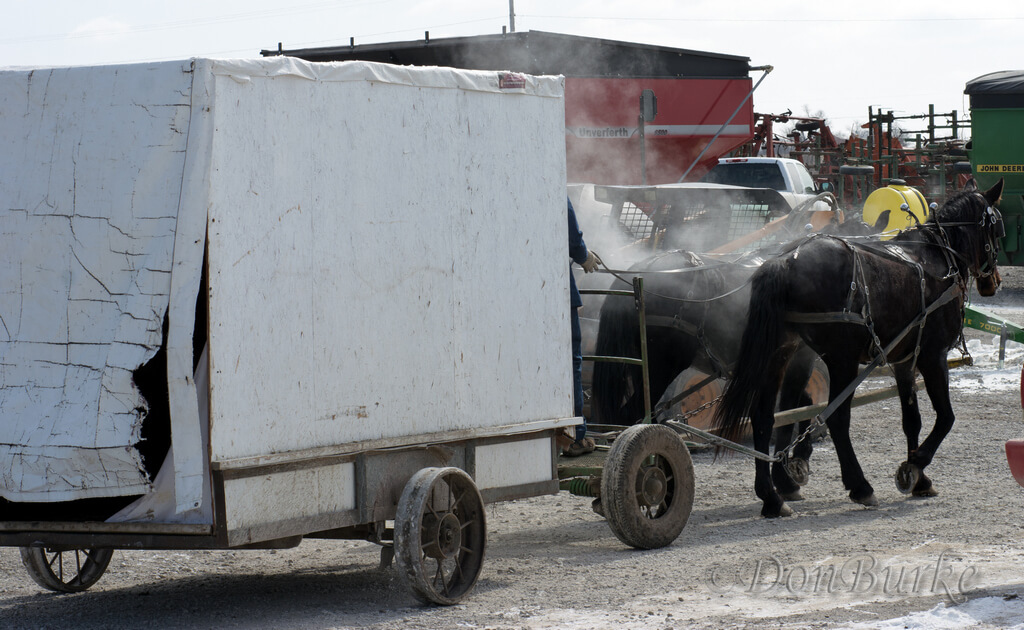 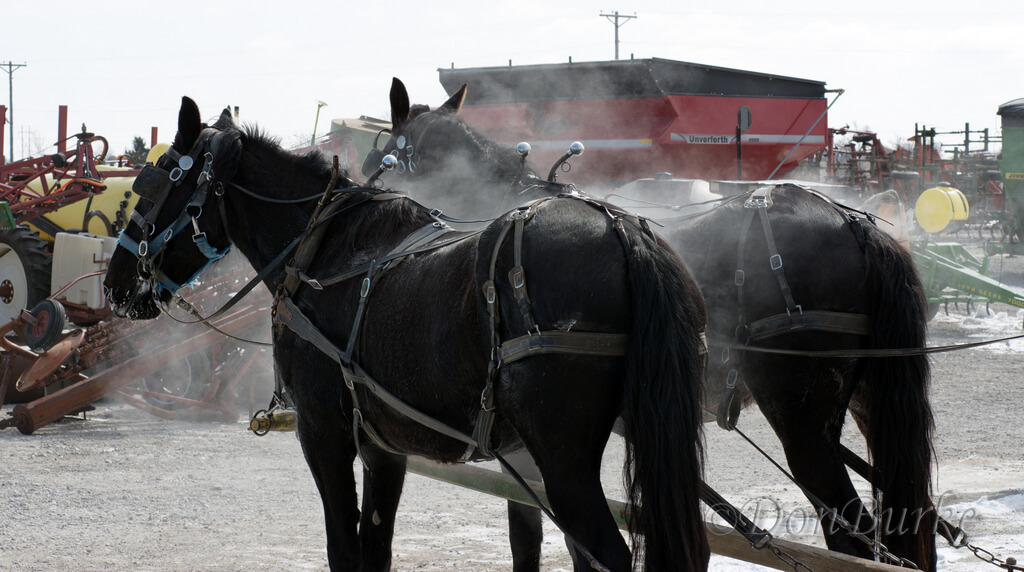 Or the surprise on two different occasions when I dropped in to visit an Amish community only to discover that the Amish had abandoned it. 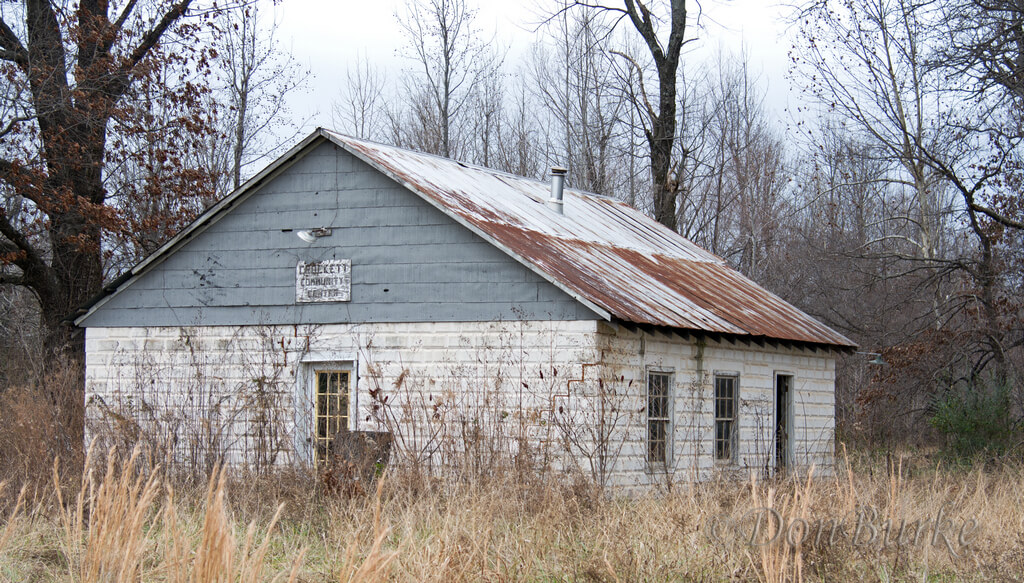 Amish America: What have you learned along the way? And how have things changed over the years?

Don Burke: One thing that I’ve had to learn relates to how I approach taking pictures in the Amish world. I don’t suppose it’s as much something new, but just something I must keep in check.

Outside of my Amish work I am not really a people photographer, but rather a “subject” photographer. My main passion is nature, and in pursuing that in any given shot my subject is this flower, or this eagle, or even this snowflake. And I sense that many of us taking pictures of the Amish have a perspective of “this culture” as the subject of our pictures. But I have to remind myself that “this culture” is also someone’s personal world. 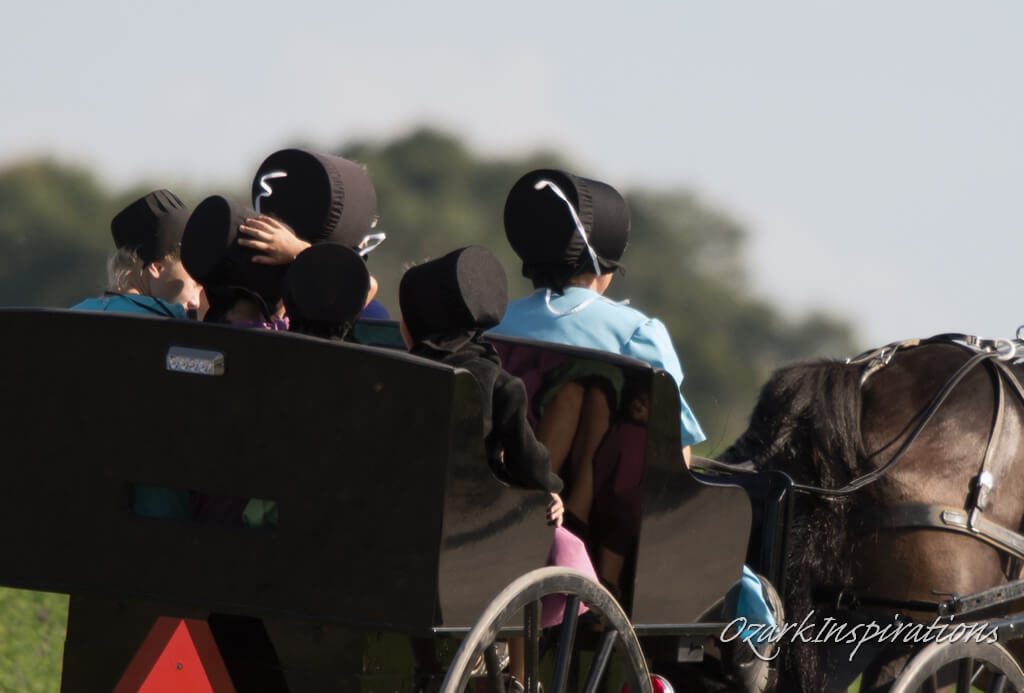 This means that I have to be willing to sometimes miss a good picture of a great subject in order that I am not considered a threat to or overly disturbing someone’s personal world. And then on occasion, when someone sees my sensitivity to their world, I am even invited into that world with them. 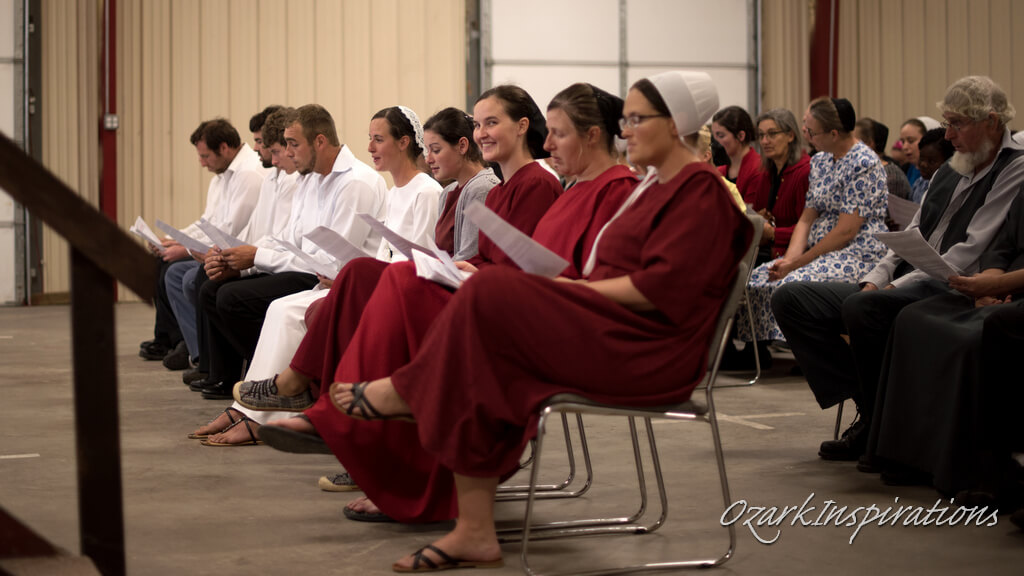 How have things changed? From my earliest days picturing the Amish I’ve tried to avoid doing anything that would reasonably make the Amish uncomfortable. And while that governing principle has not changed, how it fleshes out in practice is always evolving.

A decade ago that principle mostly involved taking pictures unnoticed. If I managed to do that I was pretty much home-free since after culling and editing, the new pictures were posted to my online albums (Flickr) which was only seen by a few friends. Since “Amish” and “online” were words rarely used in the same sentence at that time, there weren’t a lot of Amish who would see my work.

But now my pictures also get posted on my own Facebook page dedicated to my Amish work, and possibly to Amish-related Facebook forums. Some might later be highlighted in an Amish America post. So now any given picture can possibly have much more exposure than they used to get. In addition to that, the Amish are increasingly tech-savvy with more and more Amish youth – and even adults – having internet access through work computers and personal smart phones. So with more photo-exposure and more Amish online, there is a greater chance of recognition…and the chance of someone being uncomfortable with it increases considerably. 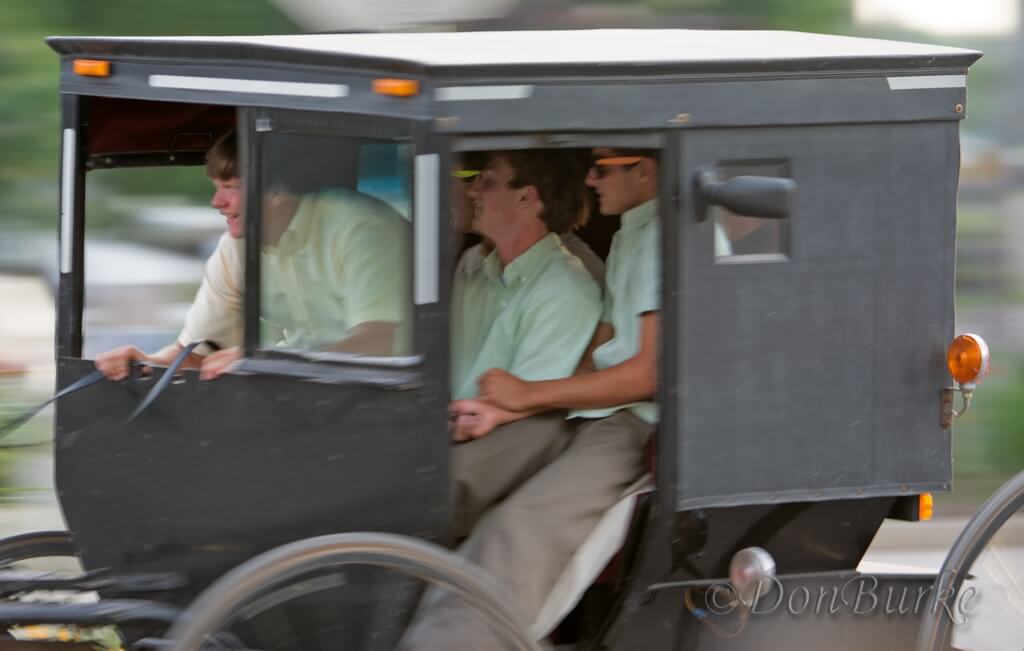 Two incidents in more recent years particularly brought this point home to me. On a trip through NE Ohio I drove through some random small town and snapped a couple of pictures of a random Amish buggy tucked away in a barn beside the road. When I posted the buggy image online, someone very soon commented, “Oh, that’s Enos Zook’s buggy!” 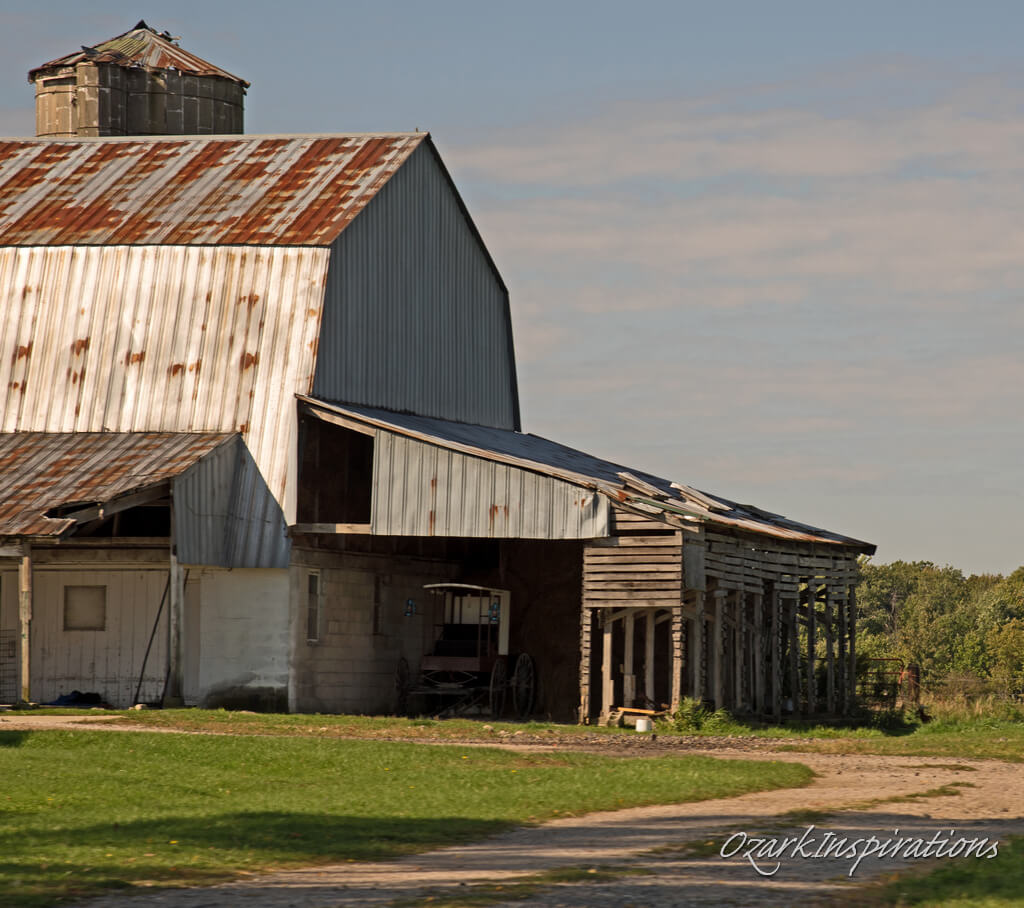 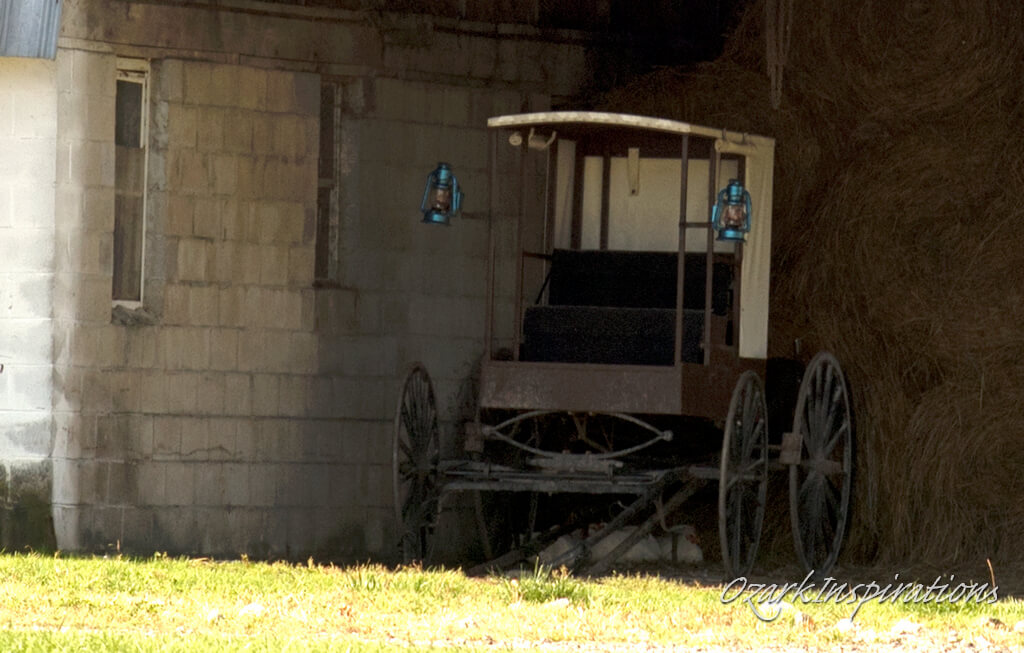 In another instance, I posted a picture of an Amish gentleman sitting in an open buggy going down the road, with generic Amish hat, generic Amish clothes and only part of his profile visible – what I thought was close to an unrecognizable picture – and shortly someone was commenting that this was an uncle or someone else they knew. 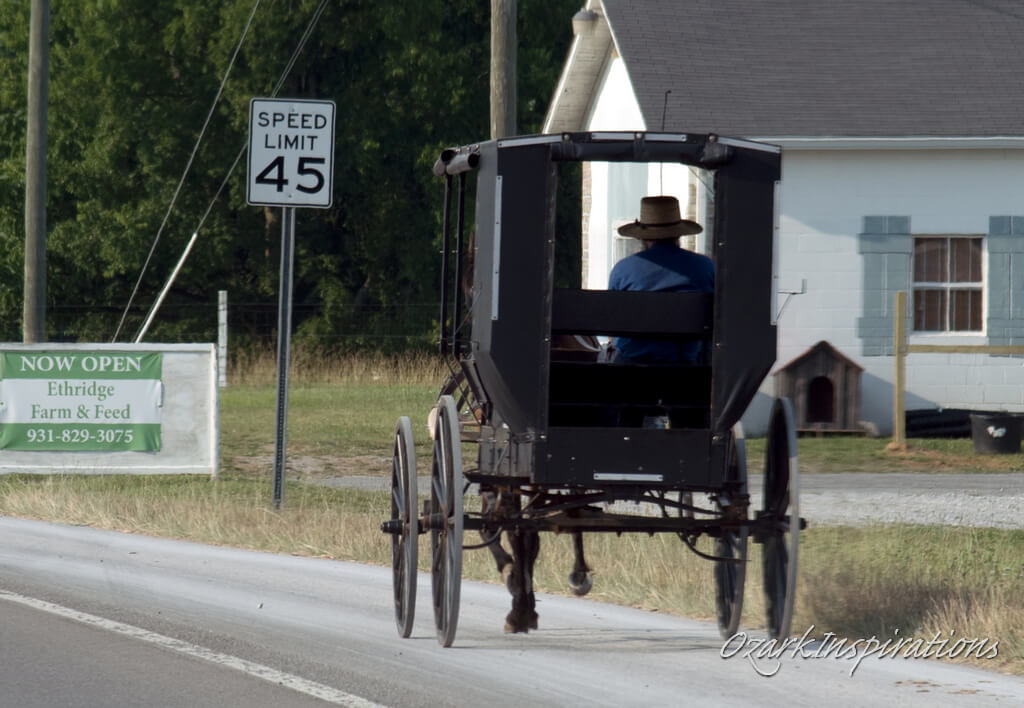 So for me it’s a balancing act. On the one hand, my goal has been and will continue to be to capture moments of Amish culture to enjoy and to share with others – and capturing that culture in its natural state often means that I do so without people knowing that I’m doing it. Yet on the other hand, while I capture the culture for my own interests and to share with those who will never have the opportunity to experience it first-hand, I do not wish to make it realistically uncomfortable to the people being pictured. And as times have changed, my way of balancing those elements has evolved – and will continue to evolve.

How do you choose which communities to visit and photograph? And how do you plan and prepare for the visit?

In the early days that was easy – we went wherever my wife wanted to go! Destinations pretty much revolved around taking vacations to locations she had read about. But as my own personal interests began to grow I was more given to see Amish in non-touristy settings. And since my time was often limited to a free day or two instead of a whole vacation week, distance began to be more of a limiting factor. Living in Missouri I can make a relatively quick trip to several Amish communities – a few I can even make a day trip out of it. Or at times I might add an hour or two to an existing trip for a quick tour through an Amish community along the way. 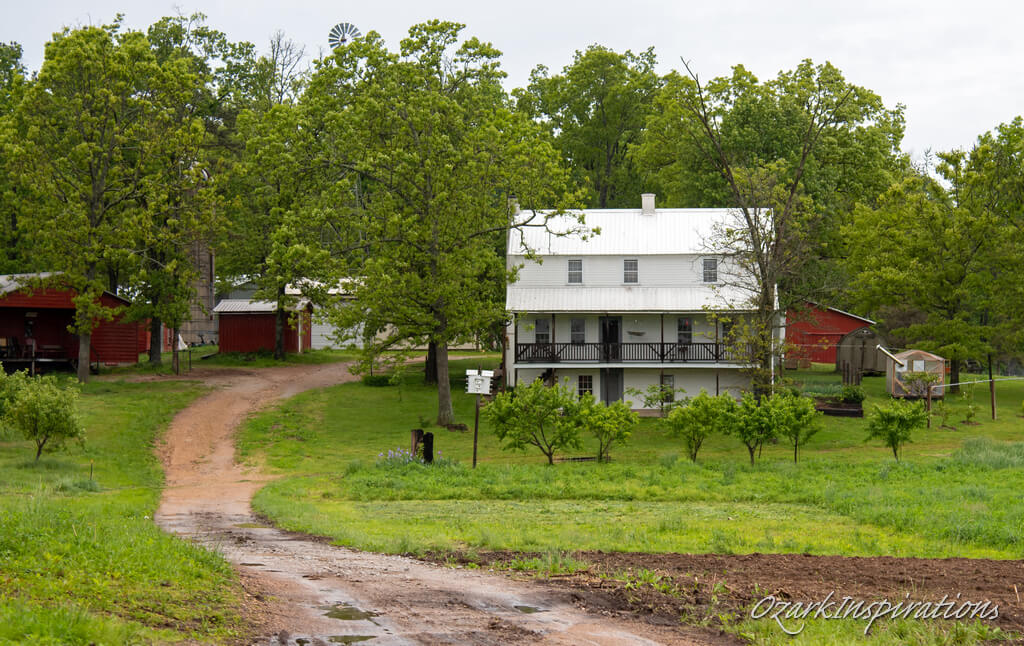 The number one key to preparing for a successful trip is – unsurprisingly – finding out where the Amish are. The Young Center for Anabaptist and Pietist Studies at Elizabethtown College periodically publishes a list of current Amish settlements (in conjunction with Joseph Donnermeyer of the Journal of Plain Anabaptist Communities). So I have a map of my state with all the communities marked, and whenever I’m making a trip I see if one of those Amish settlements might be along my way.

But knowing the communities where the Amish live isn’t enough in itself. I’ve stopped at towns on the Young Center list only to find an Amish share-the-road sign and nothing more. So finding the Amish within a community is equally important. The best tools for that are the maps provided by the Amish themselves in the various Amish directories. An Amish directory is a book listing the Amish people, businesses, schools, etc. by location. The directory may cover a territory as small as a community or as large as several states. From the maps I then sketch out the route I want to take, highlighting stores, home-shops and other places I might want to stop and visit. 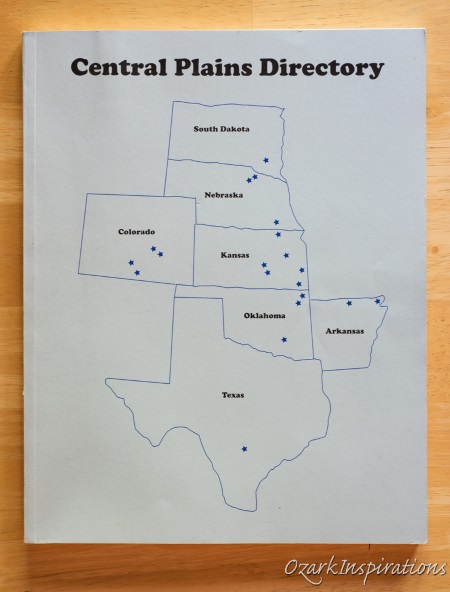 Navigating the now-mapped-out route often involves traveling both directions on the roads where the Amish are located, allowing me to take pictures on both sides of the road. I usually select a wider-angle lens, set my camera to automatic settings, then travel up and down the roads just pointing my camera through the windshield or side windows in the general direction of the Amish homes and other features, often without even knowing for sure what the camera is seeing. If I see something of particular interest I might pull over to the side of the road, possibly switch to a telephoto lens for a closer shot, and then it’s back on the road. 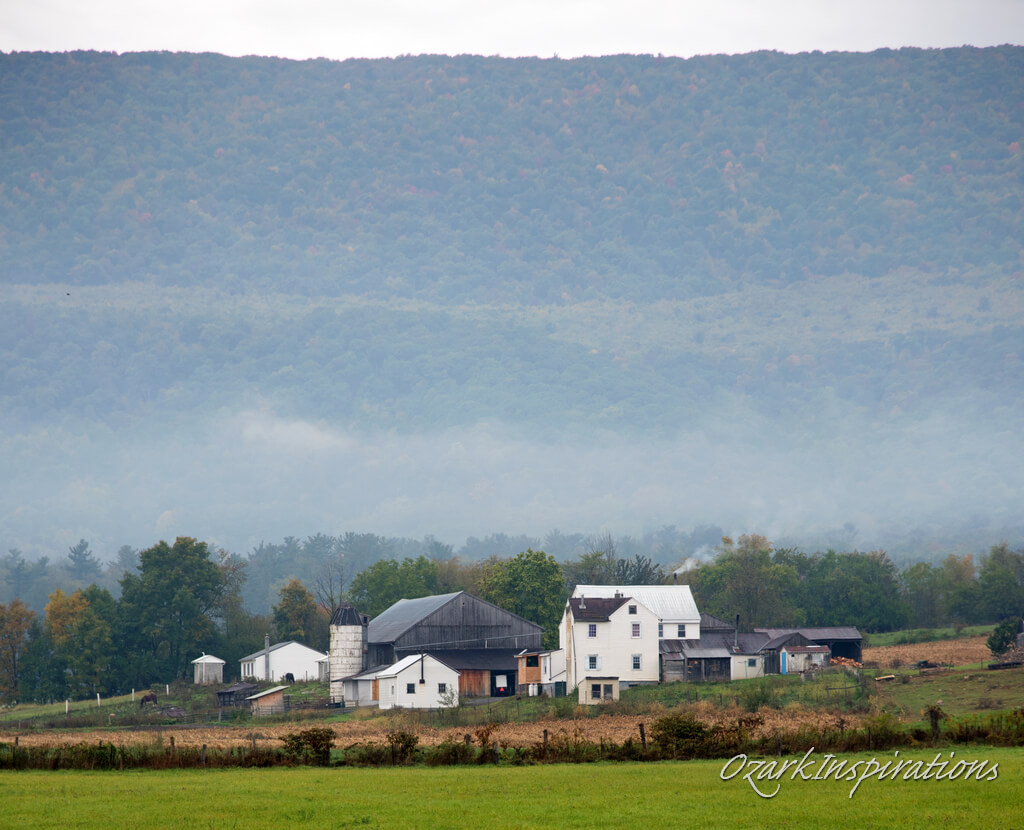 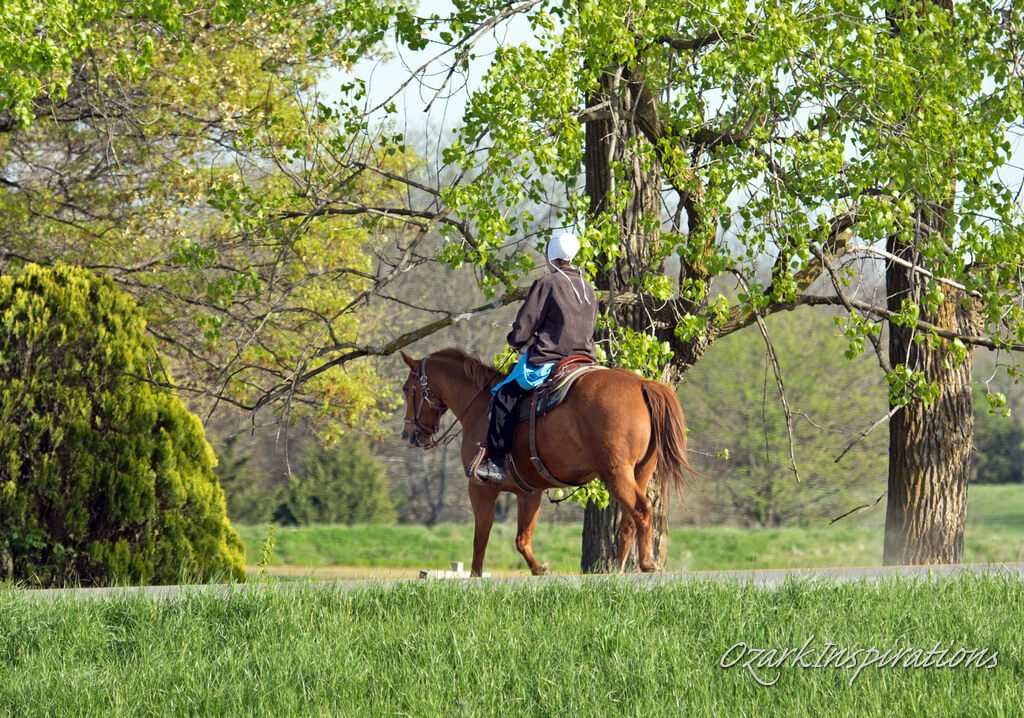 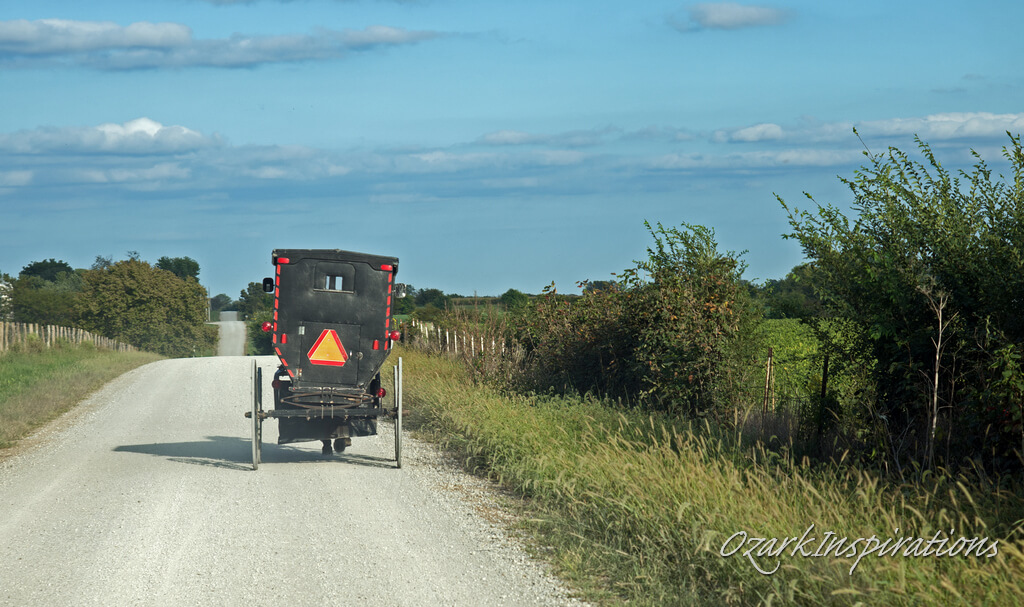 And part of preparing is to plan to buy something if I make a stop, esp. at small home businesses. Maybe I don’t have room in the car or a need at home for a piece of Amish-made furniture; but if I take time out of someone’s day and possibly strike up a conversation with them, I should at least attempt to find something in their shop that isn’t overly expensive to buy as a souvenir, as a small gift, or maybe to snack on. And that means preparing by having some cash (in small bills) ready in your pocket. 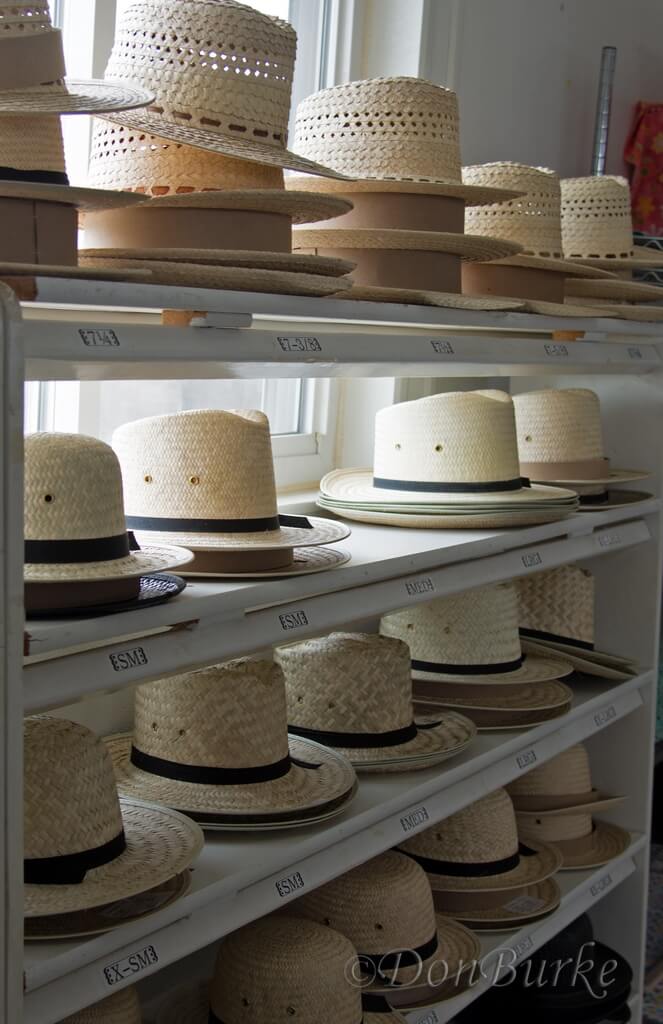 And along with some cash, I pack in some appreciation, too. I remember one place I visited – an Amish home with a small shed for home-made candies and treats that the mother made, and a large-ish woodworking shop beside it that was the father’s business. After a couple of visits to the community that included stops at the treat shop (she made some wonderful cashew brittle), I struck up a conversation with the man about his woodworking. When I showed interest in that, he gave me the full tour of his shop. Because of the interest and appreciation shown over time, on a yet subsequent visit with my wife and a couple of our friends, we stopped there and they got the shop tour and some friendly conversation about his home property and community events as well.

One final question: What are some of your favorite or most interesting pictures that you have taken of the Amish world?

Erik, picking just a few out of over 8,000 pictures isn’t an easy task. But I’ve scattered some of those top-pick-pics throughout this post.

Thank you to Don for sharing his insights and experiences. You can view Don’s full online Amish photo catalog here.