This year marks the 30th anniversary of the founding of an unusual (at least at the time) Amish settlement in Indiana. In December of 1991, two Amish families departed Lancaster County for their new home 700 miles away in the Hoosier State. New settlements were less common then than they are today, and Lancaster Amish had rarely moved outside the state to form new communities. Such a move was rare if not unprecedented at the time for Lancaster people. 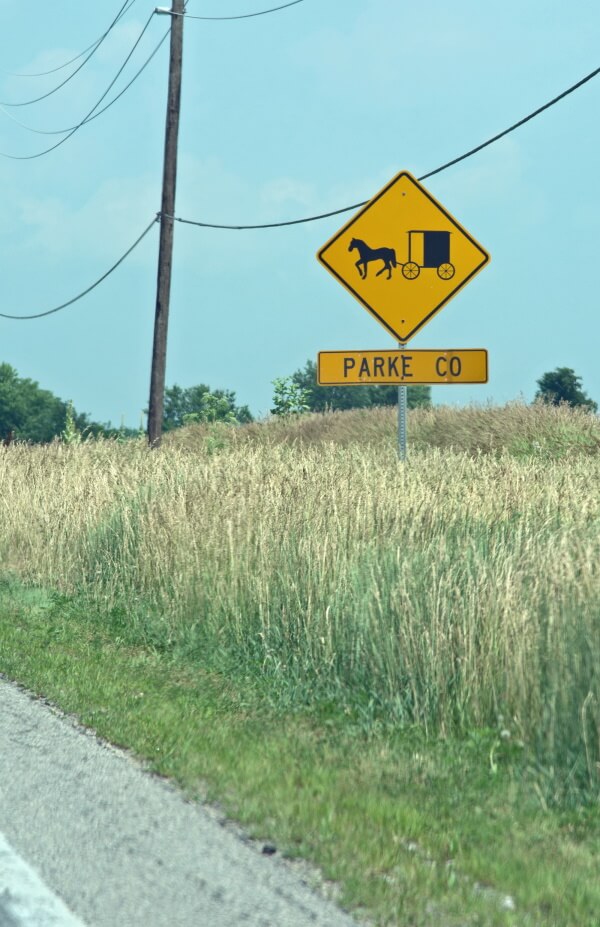 Steven Nolt and Thomas Meyers tell the story of the Parke County community’s founding in their excellent book on Indiana Amish, Plain Diversity: Amish Cultures and Identities. Why did they decide to move, and so far away? Several things motivated them: “Chief among these was a desire for available, affordable farmland” according to Nolt and Meyers. That motive would ring true with the Lancaster Amish of today, where land has not gotten any cheaper, nor more plentiful.

Other factors included congestion in increasingly-populated Lancaster County (though I imagine the Lancaster County of 1991 would appear downright sleepy to residents of the county today) and zoning restrictions which made life less convenient and more expensive. Amish also felt the Lancaster County settlement’s sheer size “militated against church unity and fellowship, and ran the risk of reducing Amish affiliation to a set of identifiable behaviors instead of a set of mutual relationships” (Plain Diversity p. 124).

The smaller size of the new community also meant youth activities being under the more watchful eye of adults compared to the larger home settlement, where the youth community naturally has its wilder elements (p. 124).

One other aspect is noteworthy. The Ordnung understanding that the new settlers came to included a prohibition on growing tobacco, a fairly common cash crop for Amish in Lancaster County, as well as prohibition of tobacco use. They also placed a limit on milking stanchions, to just 32. This would help limit the size of herds, and in turn keep the focus on family labor and away from mechanization (p. 125-6). 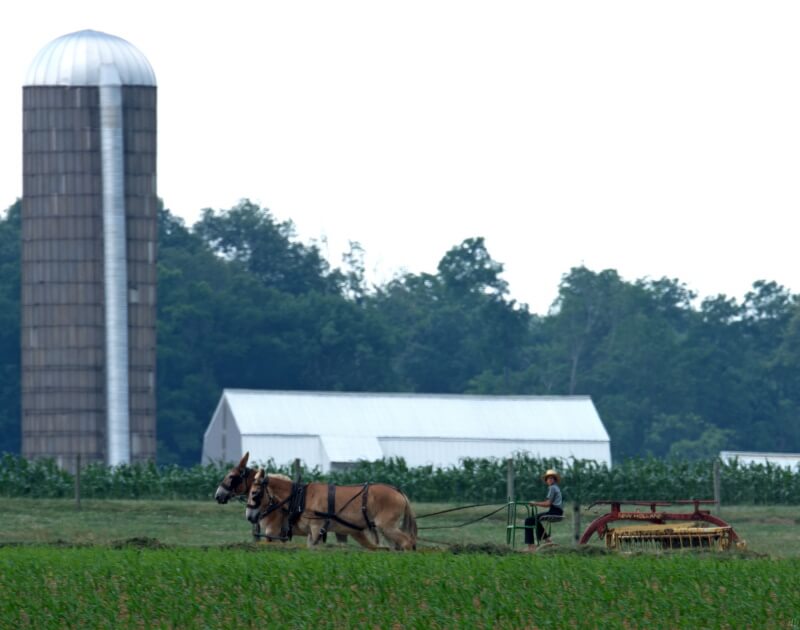 I was fortunate enough to pay a visit to this community way back in 2004, when I think it had around 5 or 6 church districts (today it has 10). It was immediately evident these were a different people from the Daviess County folk I had spent the previous weeks with. I don’t remember too much from that visit – meeting a farmer of few words; and then one talkative and friendly fellow who was originally from Geauga County…and of course the covered bridges.

Parke County claims the most of any county in the US with 31; number two would be Lancaster County, at 29. I’ve always wondered half-seriously (can you wonder half-seriously?) if that fact didn’t have its own subconscious pull as well. Or maybe the Amish had no idea about that until after they arrived. Still, I’ve always found it a charmingly odd – coincidence? – they ended up there, out of all of the thousands of counties in the US.

There are no covered bridge photos in the following selection from Don Burke – but we do get to see various views from around the Parke County settlement. I hope you enjoy this glimpse at the way these once-Lancaster-transplants (and I suppose now increasingly “native” Hoosiers) live.

First of all, this farm looks like it could be straight out of Lancaster County.

Laundry is out on the long pulley lines favored by Lancaster Amish:

A solitary solar panel perches on the rooftop. 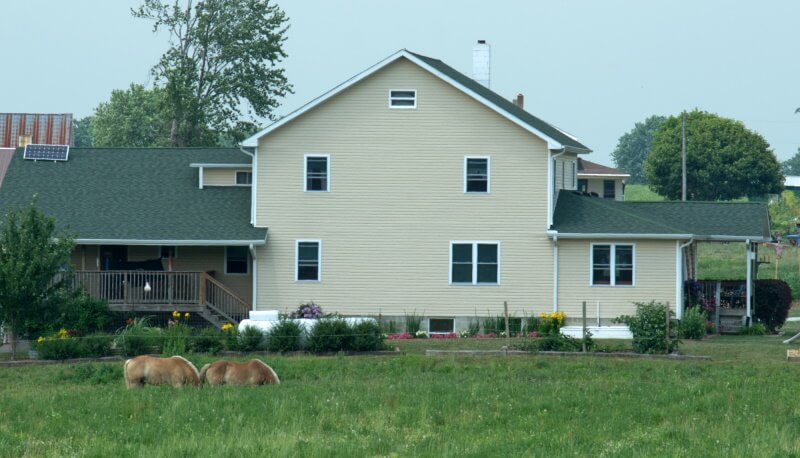 They weren’t the only families with laundry out that day.

Another solar panel. They are used here as well as “back home” in Lancaster County.

A school with horses grazing outside. Here’s another example of something like that in an Ohio community. 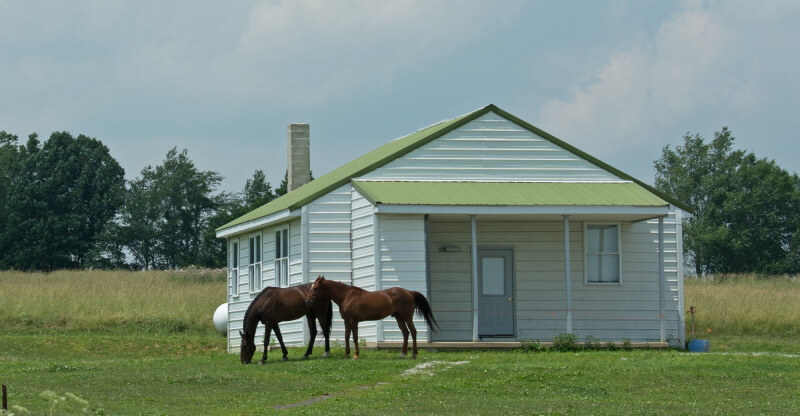 Let’s have a look at some of the community’s businesses: 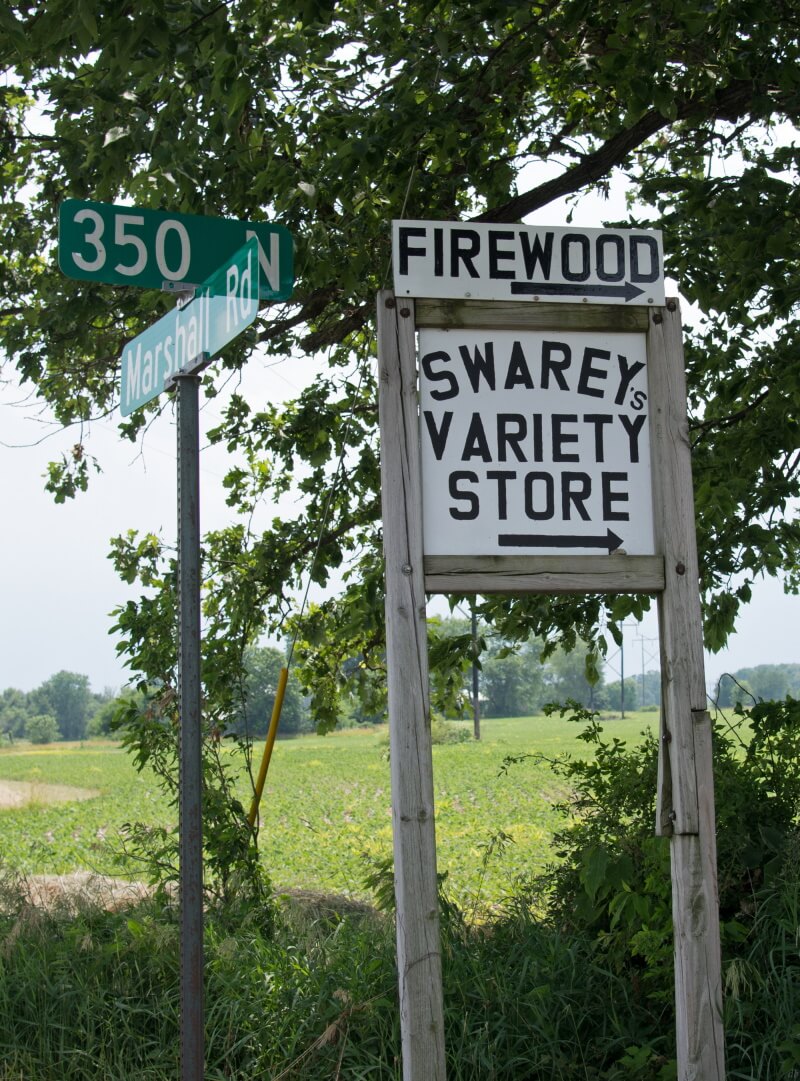 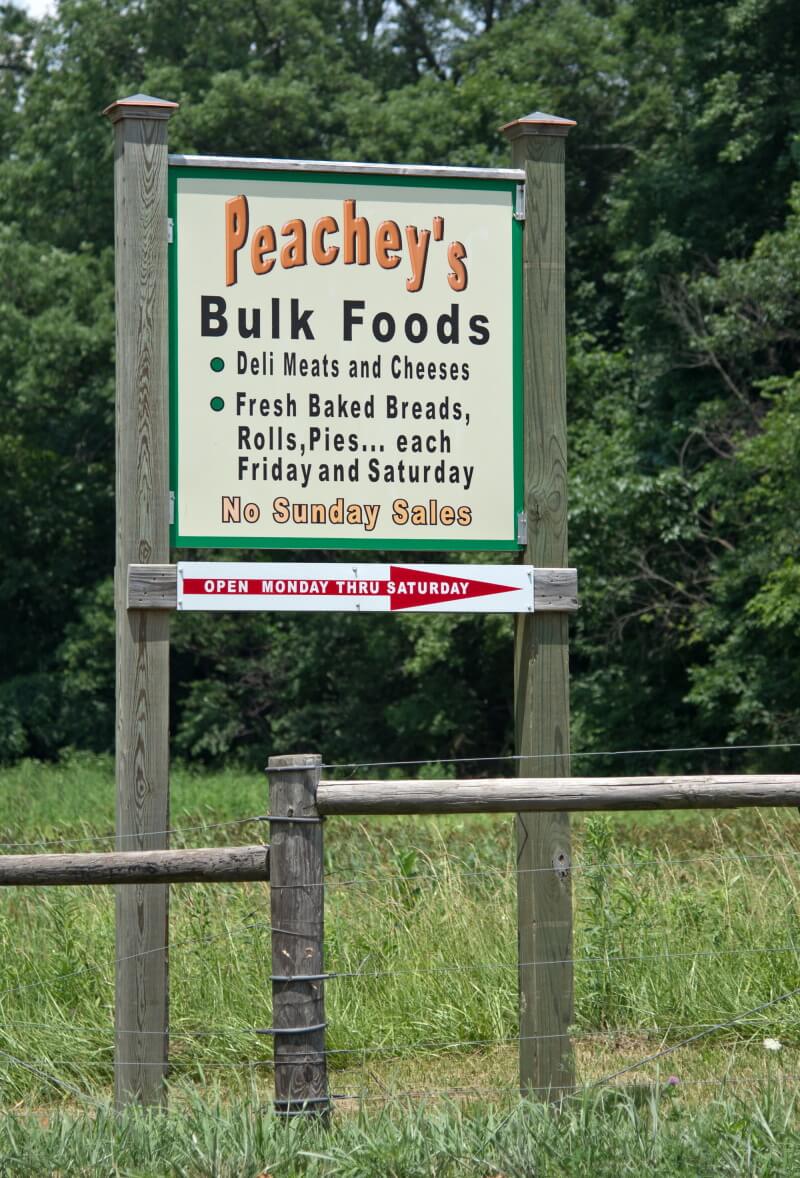 Every Amish community of some size needs a good bulk foods store. 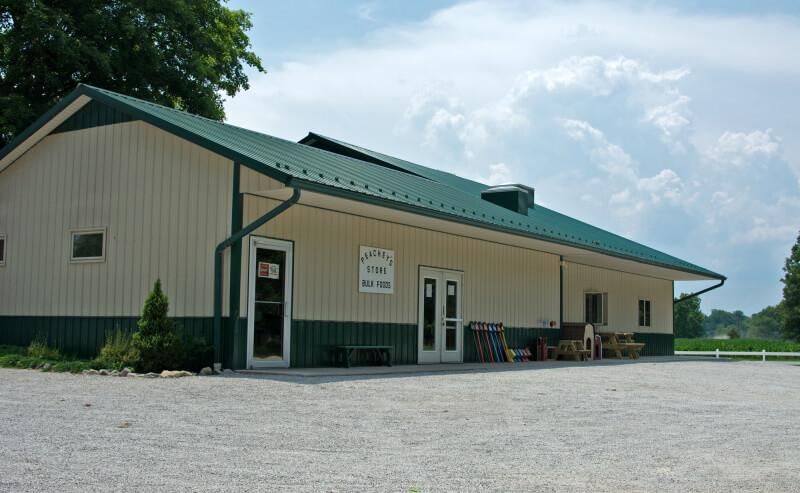 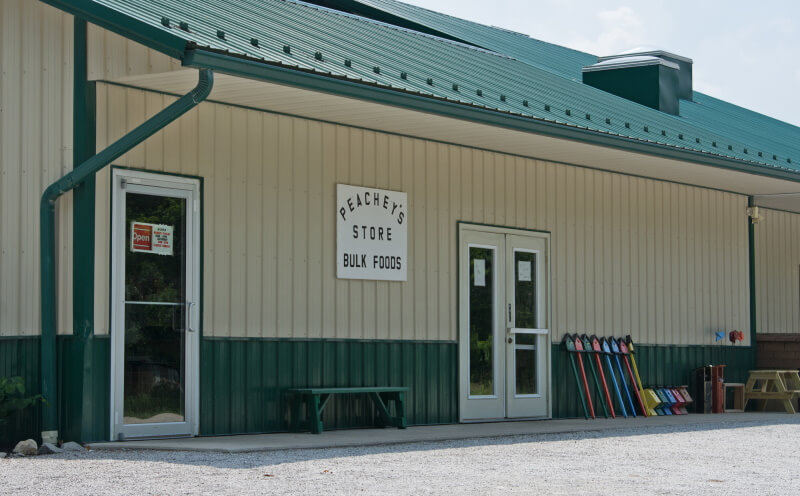 This way to the butcher shop and produce seller. If you were looking for the Amish, “No Sunday Business” lets you know you’re on the right track. 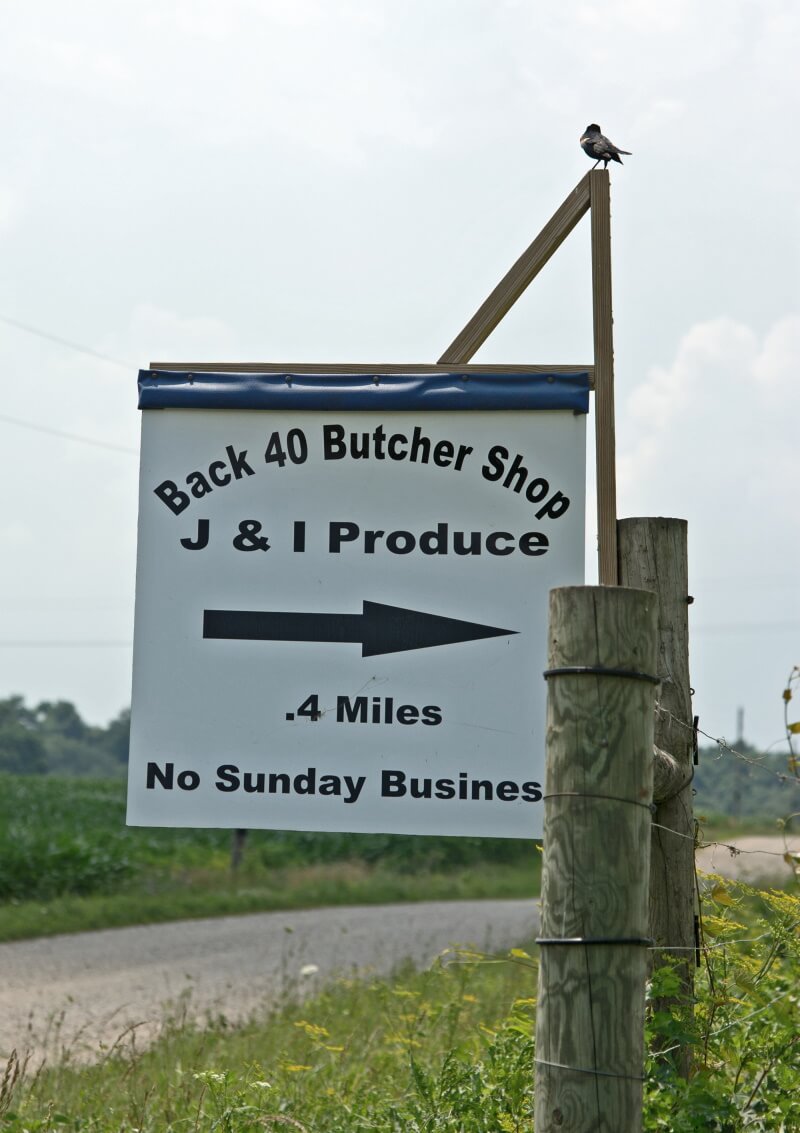 What I find odd about this sign is that they seemed to select especially “cute” photos to represent the animals they turn into meat products. Three of the four of them at least. I mean, really. That little piglet. Couldn’t you have picked meaner or uglier-looking shots? Still, can’t say I’d turn down the summer sausage or jerky. 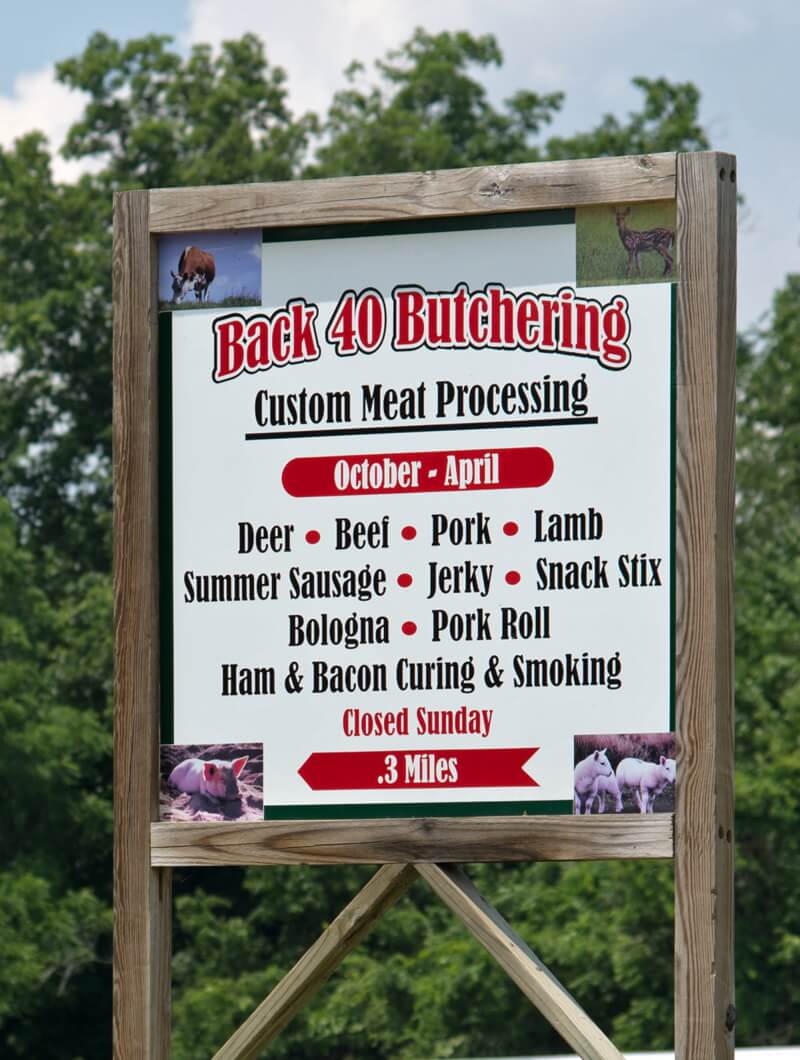 It might be hard to see the lettering, but this is a lumber business.

An Amishman and presumably two of his sons making hay in this nice sequence of photos: 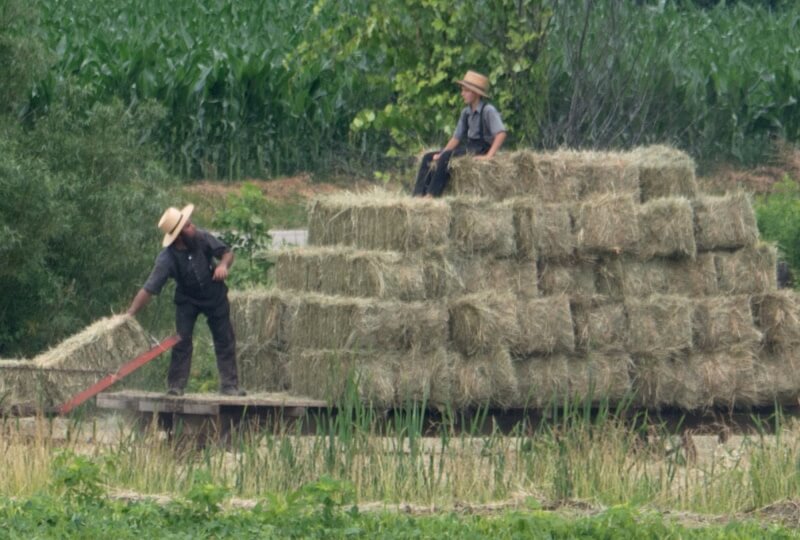 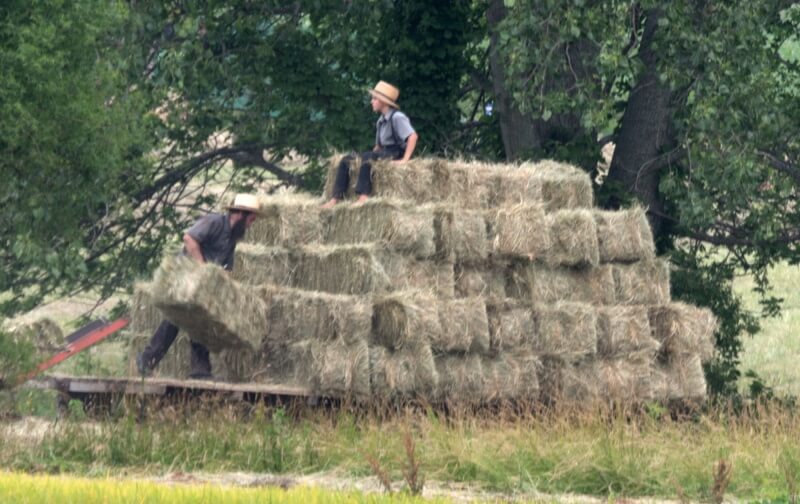 Finally…barefoot on the open road. 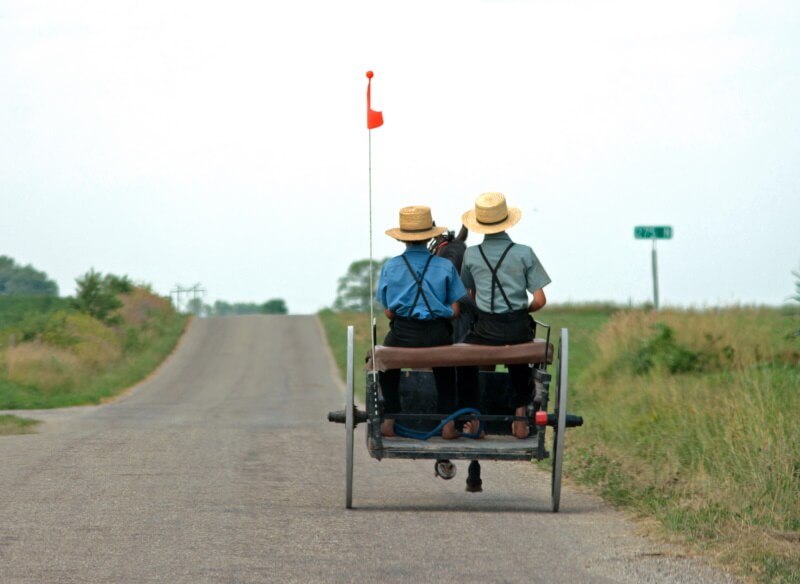 Thanks to Don for this look at the Parke County Amish. View more of Don’s Amish photos here.