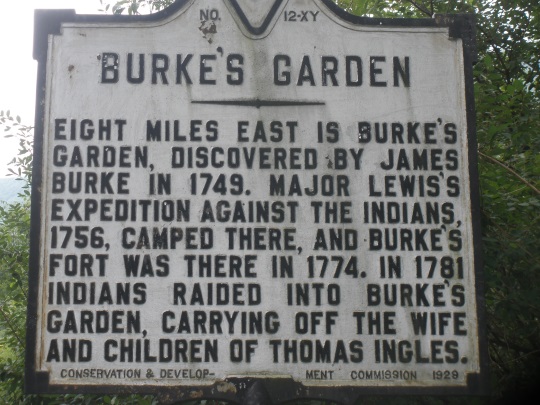 We’ve had a number of looks at off-the-beaten path Amish communities lately, from the new settlement in northeastern Vermont to the Garnett, Kansas community to the Unity settlement in Maine.

Today, reader Jerry takes us to another in that category–a community tucked away in an unusual valley in the southwestern end of Virginia.

The following is Jerry’s account of his trip to the Burke’s Garden community, along with his photos of the area. You can tell he enjoyed his visit.

Getting there is a challenge. Steep decents coupled with many hairpin turns up and down the mountain keep you very aware that this is a special place. Burke’s Garden is a bowl-shaped valley scooped out of the rugged Appalachian Mountains in Southwest VA. It’s 3200 feet above sea level. 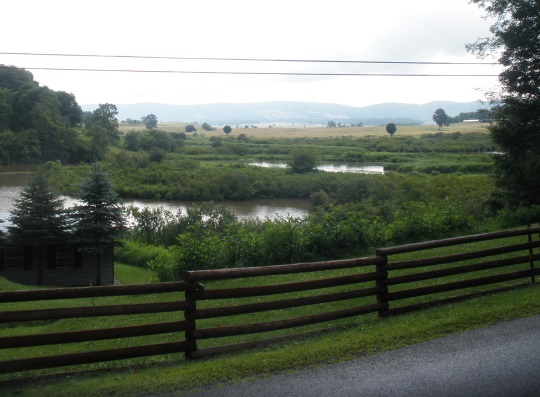 There are two small natural gaps that drain the five mile-by-ten mile, 33,000-acre “Garden of Eden”. The valley was first discovered in the 1740s by James Burke. On his first visit someone discarded potato peelings near the camp site while making dinner (remember this). The next time Burke visited the area he found a bumper crop of potatoes growing there. Thus the name (jokingly) Burke’s Garden. It’s very remote. 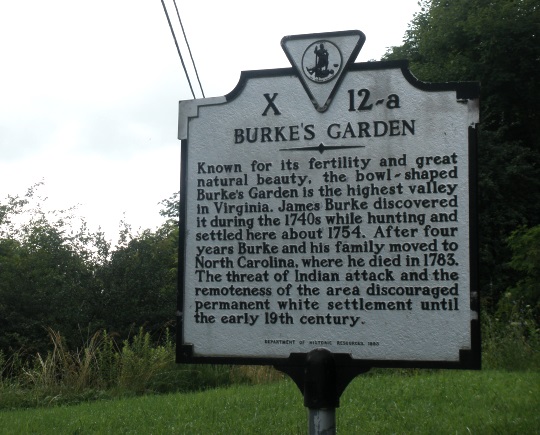 Amish tried several years ago to settle the area but the locals would not sell them land. One generation later things have changed dramatically. Currently there are eight or nine families living there and they were received with open arms. Logic might suggest that they came from nearby Pearisburg but not so, the current Amish settling there are from western Kentucky. Lewisburg to be precise. 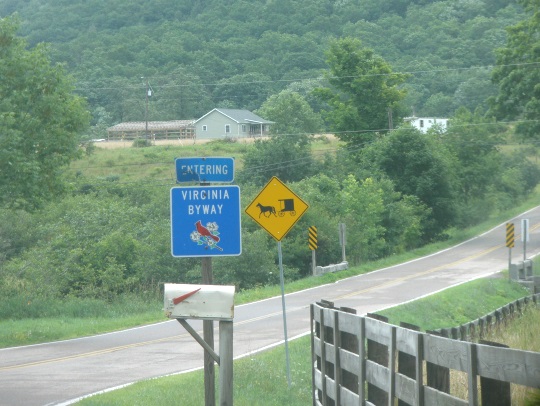 Once you land at the bottom of the mountain you will notice barns and garages with hex sign placards and horse-and-buggy road signs. At the next pull-off you will see an amazing panorama of the lower valley. A large dam, which captures all the soil erosion that happens naturally, is next. Go half-a-mile more and you will find the Burke’s Garden General Store. 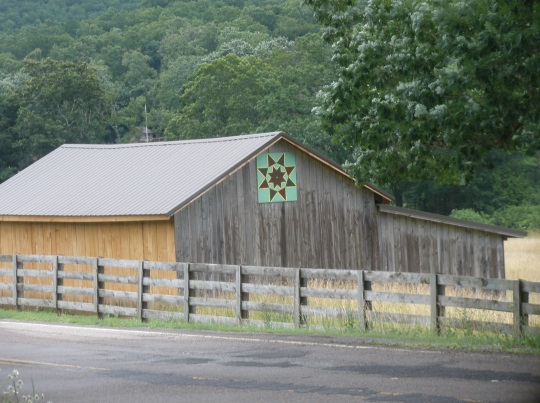 It’s Amish-operated and is the meeting place for the whole valley. Bulk food, some groceries, snacks, fresh baked goods and the best sandwiches made to order await. Mattie runs the store and the locals love her and her wares. She makes pizza on Wednesday to die for. Everything is way too generous. 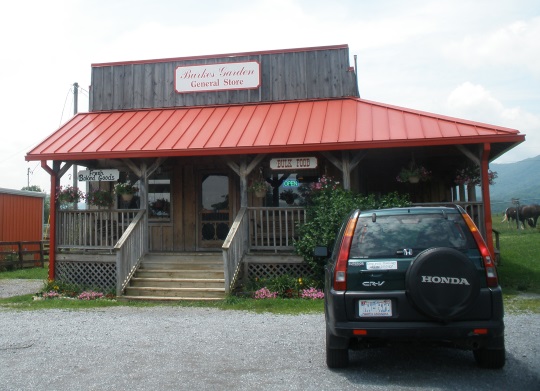 The buggy parked in front is like none other I’ve ever seen. Subtle differences but yet very different from what I’m used to. There is a fuel pump outside that I assume is for kerosene. There is seating inside next to a wood burning stove and the wraparound porch is inviting for al fresco dining. I can’t wait to eat a bowl of vegetable soup next to the stove in the cold weather. However, Mattie says her customer base would prefer a bowl of chili instead. 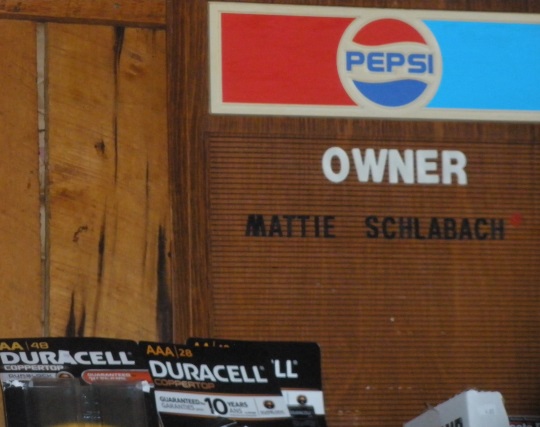 The first day I was there a quartet of locals were lunching on the porch. I went inside to interview the owner and our 30-minute conversation was nothing less than a cross-interview. We each asked questions of each other and both she and I learned so much. She refers to my Old Order Mennonite friends as “The Snyders” as they are from Snyder County, PA.

We vollied questions back and forth and the information could have filled several milk buckets. We talked about gardening and she told me that everything grows well in Burke’s Garden. She said that this year’s potato crop matured in just five weeks and there were no small fruit harvested. The new potatoes that she was looking for turned into jumbo bakers (flash back here to the 1740 explorers). 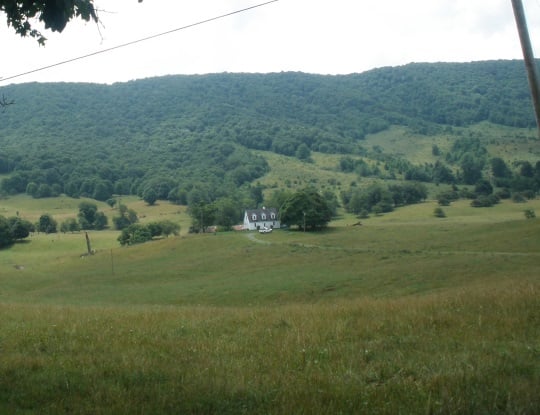 She planted “Yukon Golds” from “seed” she saved from last years crop. At this point she confirmed a long time rumor that the limestone rich loam top soil in the “garden” is no less than four feet deep. In Kentucky, top soil might have been 4 to 6 inches at best. They brought plows from Kentucky but they are not used. A cultivator for the top three inches is all that is required.

Church services are currently held in the eight families’ homes. A 56 x 24 barn was moved from Kentucky but not yet assembled. Hopefully, by this fall it will be erected. School is being held in the closed Burke’s Garden Elementary building that is now a community center. 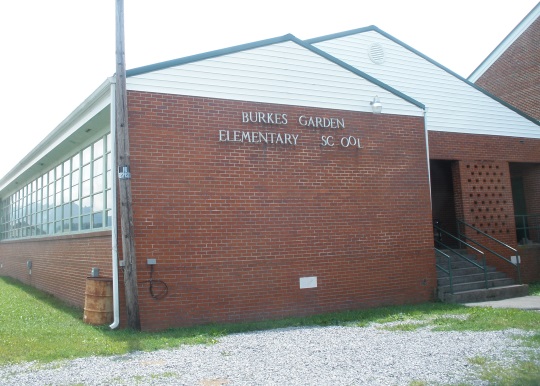 The Amish rent one room, but the heating is not suitable and shortly a real Amish school building is planned.

The school is not funded by the typical Amish auctions since only eight families are there, but instead the Amish women hold fund raising suppers every Friday at the community center to raise funds. The locals love these and often there are more diners than food available. Auctions are planned in a few years. 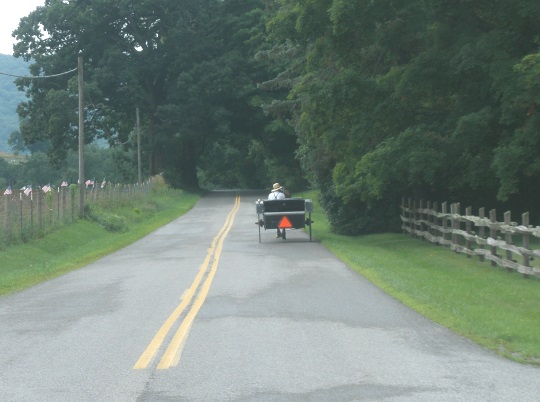 Driving through the valley, I noticed several large farms are up for sale. Mattie told me that one 285-acre farm was just purchased by Lancaster Amish. She also said that a Holmes County group was visiting the valley this holiday weekend. I did notice a mobile camper with PA plates was in the area. They were indeed “camping” in the valley. 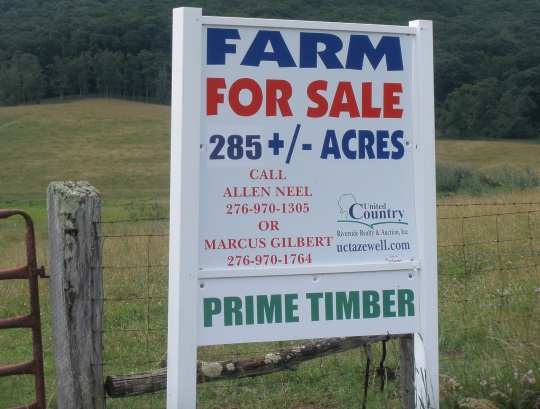 The locals are aging out and their children mostly are being educated at Virginia Tech and not interested in farming. Thus the many “for sale” signs. Agriculture is the valley is mostly summer grazing. Very few crops are raised.

The limestone soil is so rich and the grass so “sweet” that a steer can gain 3.5 pounds a day just by grazing. The beef cattle are sold every fall and new steers are brought in every spring for conditioning. 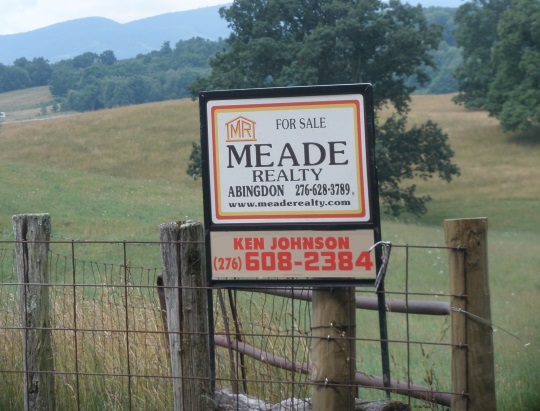 As far as the nearby Pearisburg settlement, Mattie says that they are alive and well. One farmer on the lower part sold and moved on but three families still live on the “mountain”. I’m not sure what that means.

A big thanks go out to Jerry for the virtual visit to Burke’s Garden, which sounds like a lovely place. I had heard it was an interesting area, but now I understand why.

The valley actually resembles a crater from above, as you can see in this aerial photo.

There are different stories as to the valley’s origin, but apparently the most commonly-accepted one holds that a limestone mountain collapsed upon itself following erosion of its sandstone cap.

A footnote: as Jerry hinted at above, a previous Amish settlement once existed at Burke’s Garden, for about a decade, from 1990 to 1999 (see David Luthy’s Why Some Amish Communities Fail: Extinct Settlements, 1961-2007). The current community has been in place since 2012.