Earlier this month, Don Burke gave us the story of how he first visited the Amish in Ohio, along with photos from that trip. We left off as he and his wife Pam were about to continue on — for a first visit to Lancaster County, Pennsylvania. So let’s rejoin them now for the next portion of the journey… 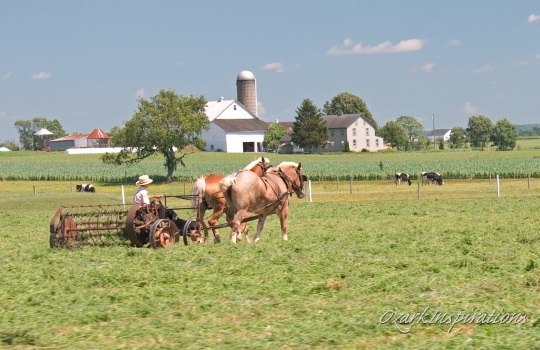 Don: As we ended the previous article in this series we were leaving Holmes County, Ohio heading for Lancaster County, Pennsylvania.

Pam: To get into the Pennsylvania portion of our first Amish trip requires back-tracking to some of the planning stages. Once we decided we were going to make the trip…

Don: What she means is once she decided after I had simply said “well, maybe someday….”

Pam: …what to do and where to stay became the big questions. To get help with these I contacted some of the Amish fiction authors I knew, and one of them posted my questions on her fan page. One reply that really caught my eye said something like, “How would you like to stay with a real Amish family?” Of course I pursued that and was put on the trail of Miriam’s Sleepover in Gordonville (Lancaster County). 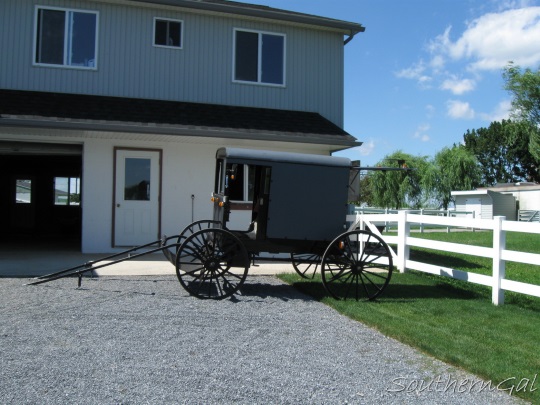 Miriam and her husband Sam had a dawdi house addition to their home where Miriam’s parents and others had lived at various times. They later had electricity run into the addition and turned it into a guest house to rent out by the night.

So I called Miriam, left a message on her phone (which was located in the barn since local church rules didn’t allow one in their home), and waited for her to call back. After a couple of times of such back-and-forth communication, we had reservations for five nights (along with a special request from Don, which will be the subject of our next article). 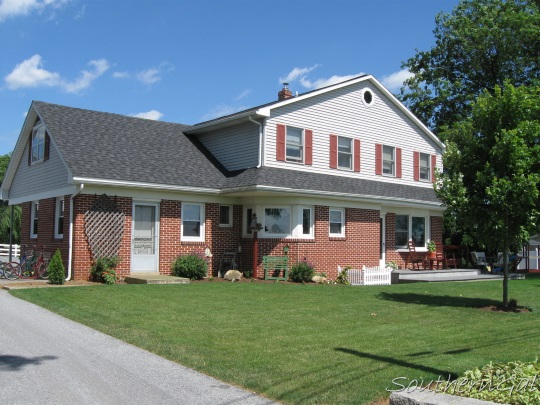 In my mind’s eye, I was expecting a farm setting with an older, large frame house. What we found when we arrived at Miriam’s Sleepover was a nice modern brick home with a built-on modest, yet nicely furnished, guest house. 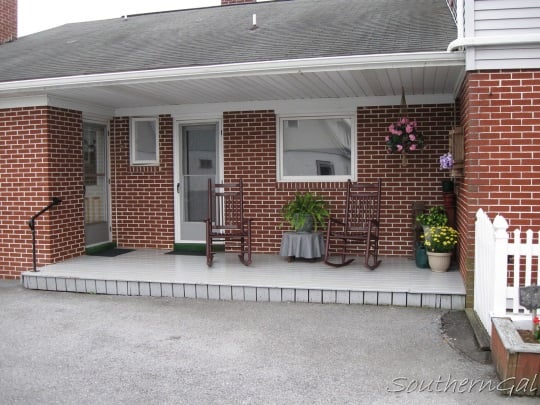 Don: Our first evening in Lancaster County we quickly discovered one of the characteristics of Amish country – businesses close earlier than we expected. It was about 8:30 when we arrived that evening, and we had not eaten. Since it is a high-tourist area, we thought finding a place to eat at that time of day would not be difficult. But it was.

The only place we eventually found open was a concession stand at a local baseball field, and it was closing up because the last ball game had just finished. So, we drive some 900 miles to immerse ourselves in Amish life of Lancaster County – and do so by eating close-out concession stand food in the dusky-dark as we watch the last of the Amish and English ballplayers leaving the ballfield.

Pam: During the next four-and-a-half days in Lancaster County, we had a variety of adventures. We visited a few of the “touristy” places and drove the back roads to enjoy the countryside. 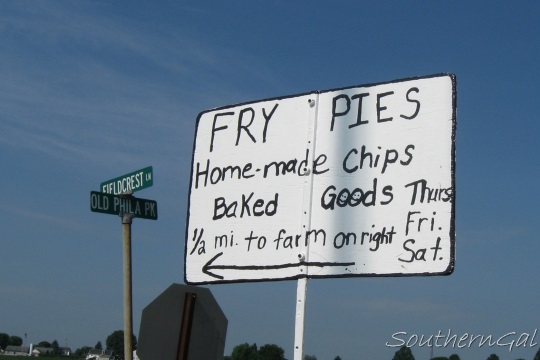 Stops included the occasional Amish schoolhouse and some of the several covered bridges in the area. 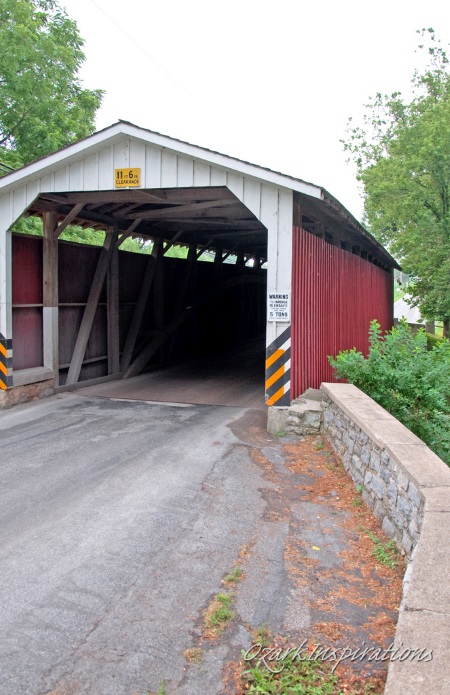 Don: We noticed several things that composed the individual character of this Amish community. Scooters were very popular here, and apparently bicycles were not allowed. 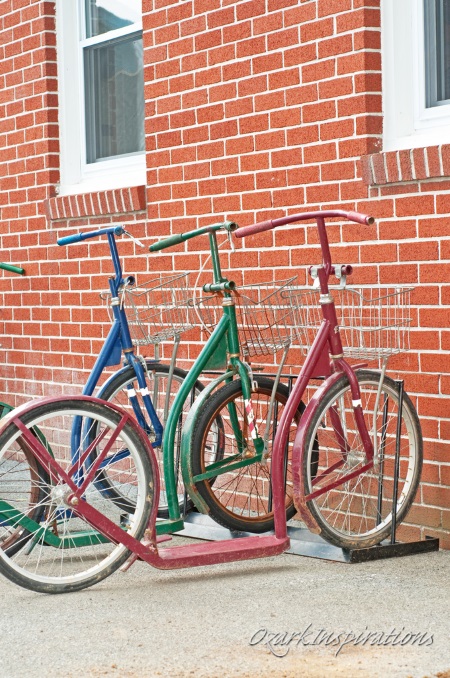 Instead of the black-top buggies we had seen in Holmes County, here the buggy tops were gray. 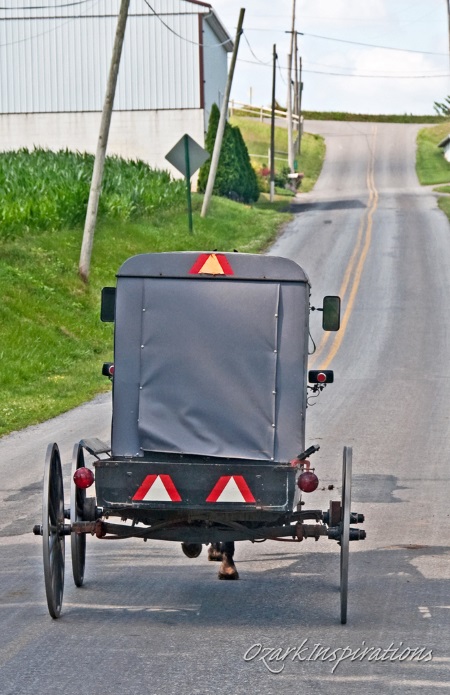 And like the Amish man in OH had suggested, things here just had a bit more “spit-and-polished” – what some might consider to be brighter or even “showy” – than would be seen in Ohio or many other Amish areas. 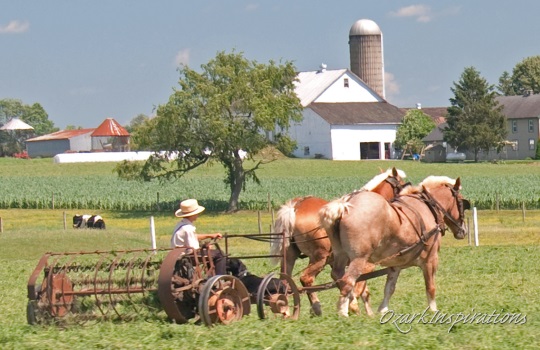 Many of the farms had an eye-catching show-piece air about them. The various buildings around the farms were typically painted and well maintained. 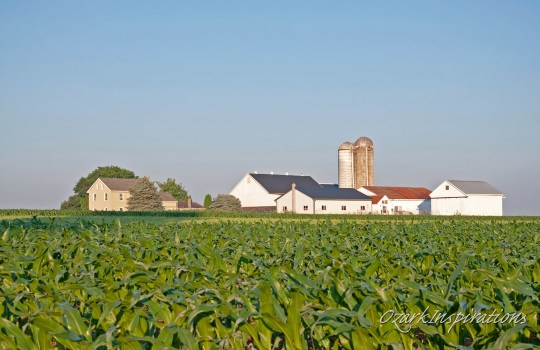 And since the total acreage of the farms was relatively small – usually no more than around a hundred acres – the gently rolling hills around Lancaster displayed several beautiful well-maintained farm places cascading one after another as we looked over the countryside.

One of the places Pam particularly wanted to see was Amish Farm & House. Operated by non-Amish who knew the Amish culture well, guides explained various aspects of Amish life as we toured through a replica home, barns, a school and other places on this fifteen-acre attraction. 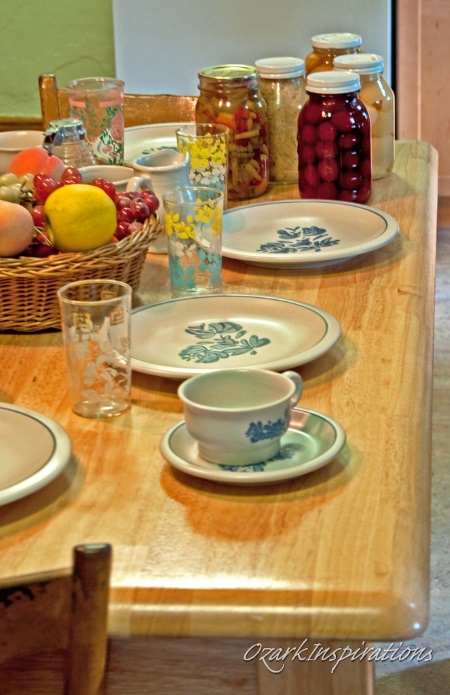 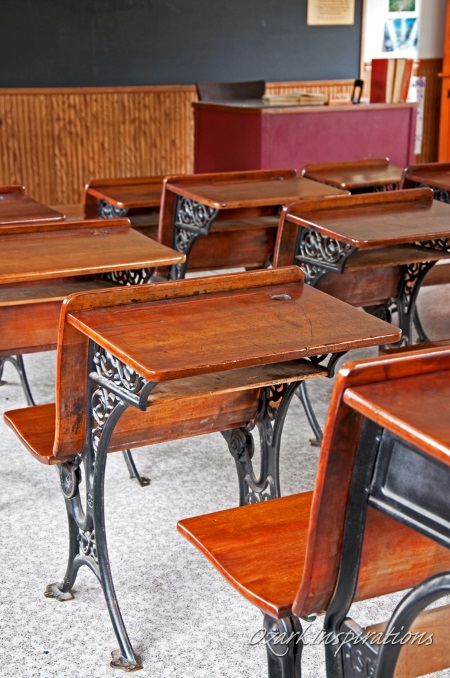 Pam: We tried some homemade root beer at a family-run road-side stand – which tasted a little better than the commercial product to this non-root-beer drinker. 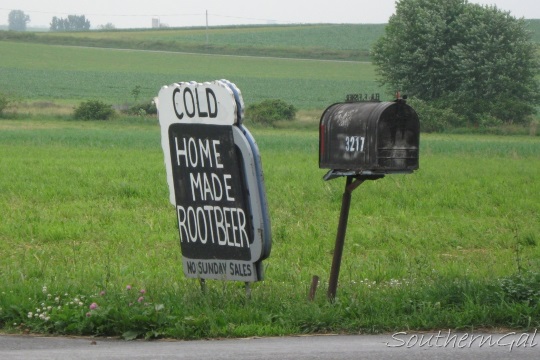 We ate at some great restaurants and bought baked goods and other food items from small road-side stands and from larger places like the Bird-in-Hand Farmer’s Market – delicious foods like whoopie pie, snitz pie, shoo-fly pie. 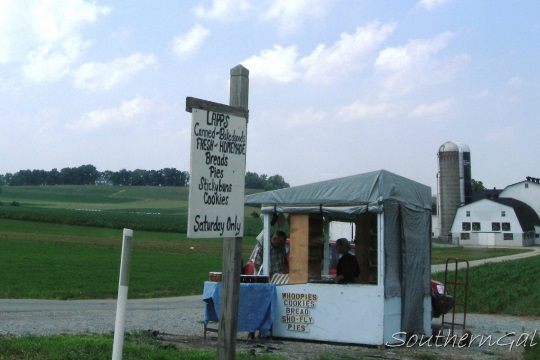 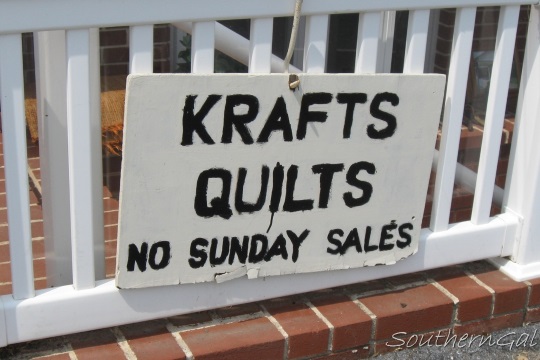 Don: The Farmer’s Market will remain forever enshrined as the place I discovered Amish Butter Cheese. If ever there was a food that the angels in heaven envy us humans for, it is this cheese.

After discovering it here on our first day of sightseeing (then coming back a couple of days later for seconds!), I spent the next two years diligently searching for the place that made this cheese.

I eventually discovered that we had been within just a few miles of it earlier on this very trip! Contrary to what the name might suggest, Amish Butter Cheese is not made by the Amish, but was made by Guggisberg Cheese in Millersburg, Ohio. 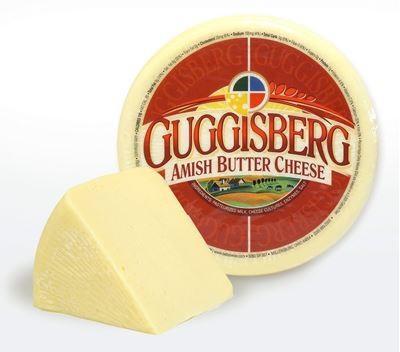 Pam: On our last full day we attended the Heritage Days Festival in the small town of Intercourse and saw lots of Amish youth participating in volleyball and other activities. 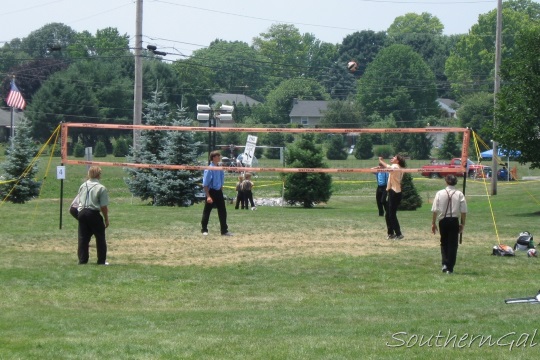 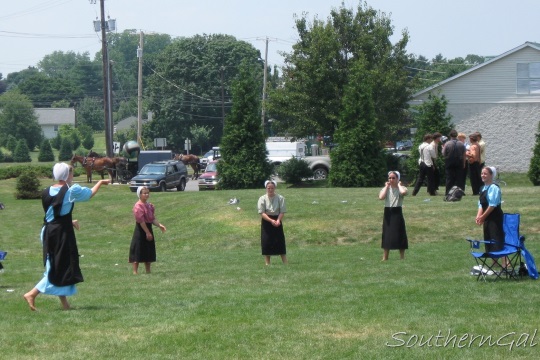 These festivities ended with a night-time fireworks display that we got to watch with Miriam, Sam, and several members of their family from their front yard. 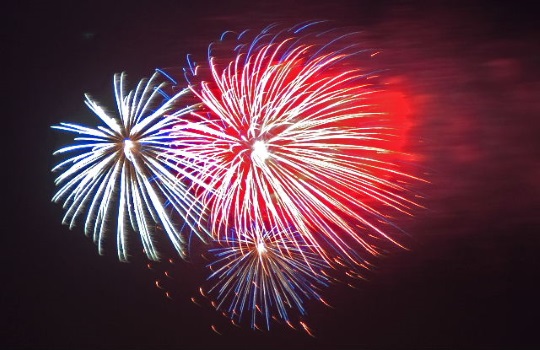 Don: This evening spent sitting with the family and watching the fireworks was my first real exposure to conversations in Pennsylvania Dutch, and I found it a bit captivating.

Although German-based languages can sound rough and harsh by their very nature, within this context of a loving family, friendly discussion, interspersed with gentle instructions and corrections to the youngest among the group, I found the tone of the language to be warm and friendly – even if I couldn’t understand a word that was being said.

Pam: One of the most special things about the week was the opportunity to visit with and get to know Miriam, an authentic Old Order Amish lady who gave me my first deeper real-life insights into “the Amish.”

Almost every afternoon or evening I had the chance to spend some time talking with her. She offered some wonderful recommendations for things to do, and she seemed to enjoy hearing what we had done, what new foods we had tried, and so on.

In one of our earliest conversations, we talked about how my interest in all things Amish had come from reading Amish fiction. To this day, as I continue to enjoy my Amish reading, I still see her smile and hear her voice saying, “Now, you know you can’t believe everything you read in those books!”

My biggest take-away from our stay in Lancaster County, though, was learning first-hand that Amish people are simply real people, just like the rest of us. Once we got through the obvious differences like clothes, transportation styles, technologies, and so on, we could find a lot of similarities in our lives. 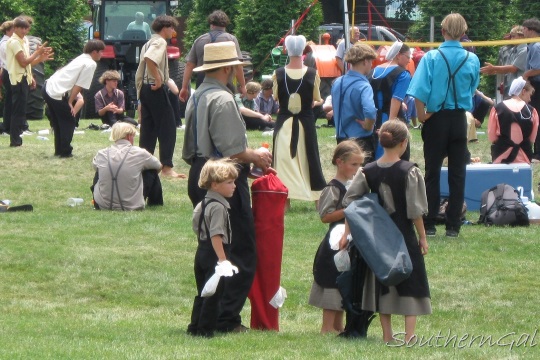 Miriam and I shared some of the common difficulties and sorrows we had both experienced through the recent deaths of our mothers to Alzheimer’s. We talked about our children and the joys and concerns that came with them, both in her world and in mine. 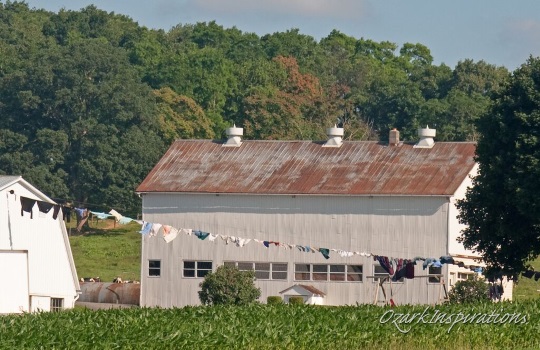 When she discovered I was a teacher, we talked about school; she shared how the school system works in Amish communities, both past and present, and told me she wished school was in session so she could take me to visit a classroom (another item on my bucket list at that time).

Don: This takes us down to the very last day that we were in Lancaster County – and what would be the most memorable part of the whole trip for both of us. And we’ll discuss that in our next post.

Postscript: For those who may be wondering, Miriam’s Sleepover is no longer in operation. When we visited with Miriam and Sam again in 2012, she told us she was closing it down. Following a pattern that we’ve been told is common among the Amish, one of the youngest of their grown children, soon to be married, was going to move into the dawdi house.

The younger family would in the coming months and years begin to assume more and more responsibilities for the upkeep of the place. And in time as the young family grows and needs more space they will eventually swap living areas of the home with the parents/grandparents – giving the younger family the main portion of the house, and the older couple moving into the smaller dawdi house. In this way, it is common for the youngest among the children to take final long-term responsibility of the parents as they move into their advancing years.

If you’d like to see more, you can find all of Don’s Lancaster Amish photo albums here.