What is this buggy doing in Adams County, Indiana? 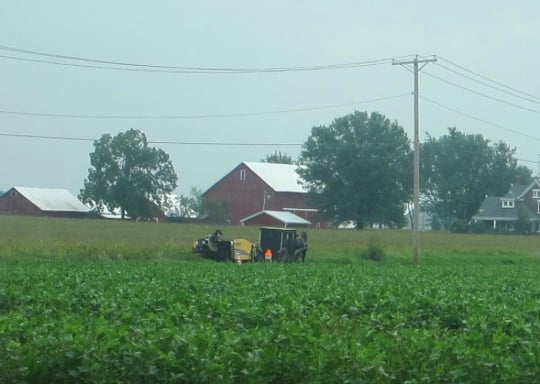 This one has been fun to ponder.  The above is not something you’re supposed to see in Swiss Amish communities like those of Adams County or Allen County, Indiana.  The Swiss Amish churches are known for a number of characteristic practices, including using only open carriages.  This photo was taken in the Adams County settlement not too far from Berne.  So what is going on? 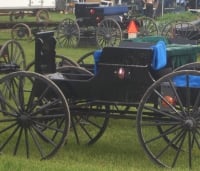 A friend who is well-acquainted with the Berne- area Amish wondered if there were a health reason which might have led to a covered carriage being allowed here.  Thinking now a couple of other ideas come to mind…for one, I wonder if this might be someone who had just arrived from a different community, and who hadn’t yet migrated over to the new variety of wheels.  Swiss Amish and Pennsylvania German ethnicity Amish do not too often move to one another’s areas, but it sometimes happens…any other ideas?

UPDATE: I’ve learned, in the comments below and elsewhere, that there are a few churches now permitting covered transportation in this settlement.  Thanks to my well-informed correspondents.