Why are Amish targeted for harassment?

Attacks against Amish have a long history.  These have ranged from verbal abuse to more serious offenses such as theft, vandalism, and arson.

In some cases, Amish have been injured or even killed.  A series of barn burnings in Big Valley, PA in the early 1990s, or targeted assaults and robberies against Amish in the Nappanee, Indiana area, are just a couple of the more serious recent examples. 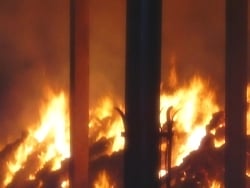 In a series of incidents in Steuben County, New York, Amish have suffered broken windows and arson (most, though not all victims here have been Amish).

Describing the Amish victims, the county sheriff had this to say: “In this case, they’re basically being terrorized up there in the late hours at night with objects striking the house and such,” Ordway said. “They keep to themselves until it gets to the point where they can’t tolerate it, and we’ve intervened.”

Why do Amish find themselves the target of attacks?

One point the NY sheriff makes:  the crimes in question may have been committed by Amish themselves, a possibility they haven’t ruled out.  Youth pranks (and worse) are not unheard of in some communities.  Even though most Amish youth go peacefully through their running-around years, there are always wild ones.

Whether the culprits here are Plain or not, Amish evoke pretty ugly reactions in some people.  A good example: the vitriol directed towards Amish, particularly online.  And it’s not too hard to find in comments sections of news stories.  Amish are portrayed as backwards, dumb, un-Christian, cruel, ruthless in their pursuit of money, and so on.

I only very rarely delete comments on this blog.  The few times I’ve had to have been cases where commenters have taken the opportunity of a public forum and a screen name to air some pretty hateful and obscene views against Amish.

Not a thing they’d do without the cover of anonymity, I imagine.

Something about the Amish seems to bring out extremes–deep admiration in many, and in a smaller group, something quite opposite.  Any thoughts why that might be the case?