The Amish of Ashland and Medina County, Ohio

Mention “Ohio Amish”, and most people think of the large settlement at Holmes County, or perhaps Geauga County to its north.

But just a short ways down the road from the large Holmes settlement lies an often-overlooked but sizeable Amish community.  Amish have lived in Ashland and neighboring Medina County for nearly sixty years.

About 2,000 Amish live here, in 15 church districts as of 2008.  In fact, you may have heard about the Ashland County group already–Joe Mackall’s widely-publicized book Plain Secrets was written about this community. 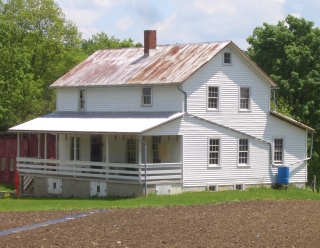 The Ashland-Medina County Amish are Swartzentruber Amish–one of the most conservative groups.

The Swartzentruber Amish are most readily associated with the Holmes/Wayne County area, where they originated and have their greatest population.

But the Ashland County group is in fact one of the largest Swartzentruber communities in the country, if not the second-largest.  This group is also typically referred to as the “Lodi Amish”, after the name of a nearby town.

I visited the settlement last spring, so consider this a delayed report.  It happened to be a Sunday, so buggy–and all other–traffic was light on the roads.

And while that meant no visits to Amish businesses (like all Amish, the Ashland County group closes up shop on the day of rest) I can report that there are more than a few, as is obvious by the many signs scattered throughout the community.

As you travel along the grid-like roads of the area, the characteristic Swartzentruber homes are easy to pick out, with their creaky windmills, peeling red barns, rusty tin roofs, and generally weather-worn appearance.

Long strands of gourd birdhouses are also common signs of Swartzentruber homes as well, and you see a fair share of them in Ashland and Medina Counties (Amish appreciate pest-eating birds on their property, and are particularly fond of purple martens).

Like other Swartzentruber communities, such as the Ethridge, Tennessee Amish, or the Amish at Harmony, Minnesota, Ashland and Medina County Amish businesses are relatively plain and simple.  Baskets, furniture, produce, baking, hickory rockers, eggs, candies, jams and jellies are all common. 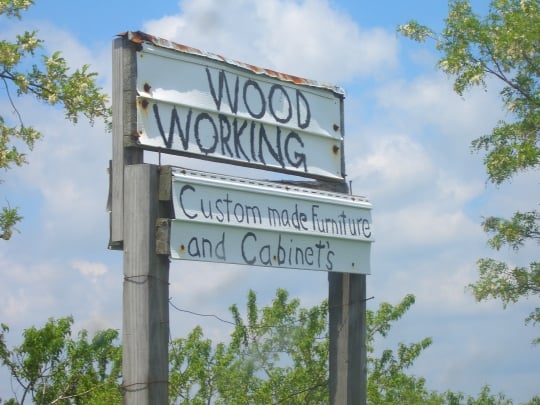 Driving down the road, you’ll usually not see much more than a simple hand-lettered sign.  For various reasons, Swartzentruber Amish are not big on marketing and advertising.  However, the signs mean the “welcome mat” is out at a lot of the local farms.

Farming, for that matter, is big here as well.  Swartzentruber Amish, in fact, tend to remain in farming more than most of their more progressive Amish cousins.  Researchers Charles Hurst and David McConnell note that “Among Swartzentruber Amish…the vast majority are farmers” (An Amish Paradox, p. 197). 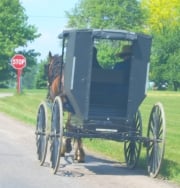 Study the history of the Ashland-Medina County group and you learn of a history of division that has extended across Swartzentruber society.

Though Swartzentruber Amish–with their plain appearance, simple homes, and lack of a Slow-Moving-Vehicle triangle–look alike to most outsiders, there are in fact 3 separate Swartzentruber groups.

In this interview, Karen Johnson-Weiner describes the conflicts that led to the division, some of which played out in the Ashland and Medina County group.

Some of the differences between these groups are tiny–for instance, while some permit drip irrigation, others do not.

Other Amish groups in Ashland County

Technically, the Ashland-Medina group is just one of a few lying within the borders of Ashland County.  There is another sizeable Amish settlement–of 7 church districts–found near the towns of Ashland and Shiloh.  That particular group is notable for its use of unusual grey-colored Slow Moving Vehicle triangles.  This community extends from Ashland into Richland County.

Another small community, of a single church district, can be found in Ashland County near the towns of Loudonville and McKay.

The Ashland-Medina community is also sometimes referred to as the Lodi/Homerville settlement, by the names of nearby towns.  And while the community technically lies in both Ashland and Medina County, there are also Amish households in Wayne County to the south.  Homerville is home to an auction featuring Amish produce, held three days a week. 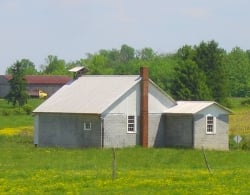 Given how close it is to the huge Holmes County Amish settlement, most visitors pass this community by.  And perhaps that’s how the Amish of Ashland and Medina County would prefer it.

However, due to their occupational choices, even conservative Amish have “opened their doors” for business, and will be happy to sell you something to eat, or perhaps something to sit on.  The Ashland-Medina County community is worth a visit if you’re in the area.

Read more on the many Ohio Amish communities.