Prison is already being discussed. From ashlandsource.com:

Judge Good said he understands the argument. But he had a question for Mahlon J. Swartzentruber, who confirmed to Good on Tuesday that he is a leader within his community.

“Your folks have religious reservations about the law, you disagree with it. And you think it interferes with your religious freedom — and I understand that,” Good said. “So how does this end?”

He said the tickets are going to keep coming, because law enforcement is trying to keep motorists safe. But if the Amish refuse to pay the fine, he will be forced to do something about it, he said.

“I can’t just let people just say, ‘I’m not going to pay my tickets.’ Because why should anybody? Why should any person in this room pay their fines if I let the Amish get away with not paying their fines? I wouldn’t be doing my job,” Good said.\

The judge said he doesn’t want to put the Amish people in jail for not paying their fines.

“But it might get to that point, where I have to do that. And that’s not going to be a happy day for me,” he said.

Good is described in the article as being “caught between a rock and a hard place.” I feel for the judge, I just wonder who put him in that position? Was it foreseeable that such rocks and hard places would enter the picture prior to the law being created? Or was that the point?

Mahlon Swartzentruber suggested that those in his community might appeal charges in order to push the matter to a higher court.

There is a recording of the exchange between Good and Mahlon Swartzentruber, at the link above. Judge Good claims that “many Amish folks in Ashland County are complying with the statute. And primarily a couple of families who’ve taken a more traditional view, including yours, are not.”

I do have some sympathy for him – but that bit feels like a pretty big mischaracterization, an attempt to portray the people cited as just a small group. But it’s way more than “a couple of families”.

He also adds “I don’t want to see a situation where conservative Amish people feel like they’re forced to leave the state of Ohio.”

But that may have very well have been the intent of state representatives Darrell Kick and Scott Wiggam, creators of the law.

Hard to say though, as they don’t seem to be talking much lately. You’d think they might want to address things at some point. But maybe they’re waiting for the first imprisonments.

An Amishman explains in a letter

Amish have expressed themselves through written letters that attaching yellow flashing lights “would mean compromising their faith and trust in God” as it’s put in the article.

Here’s an example of one, written by an Amishman named Harvey Hostetler (also via ashlandsource.com). You can open the image in a new tab to view it at a larger size: 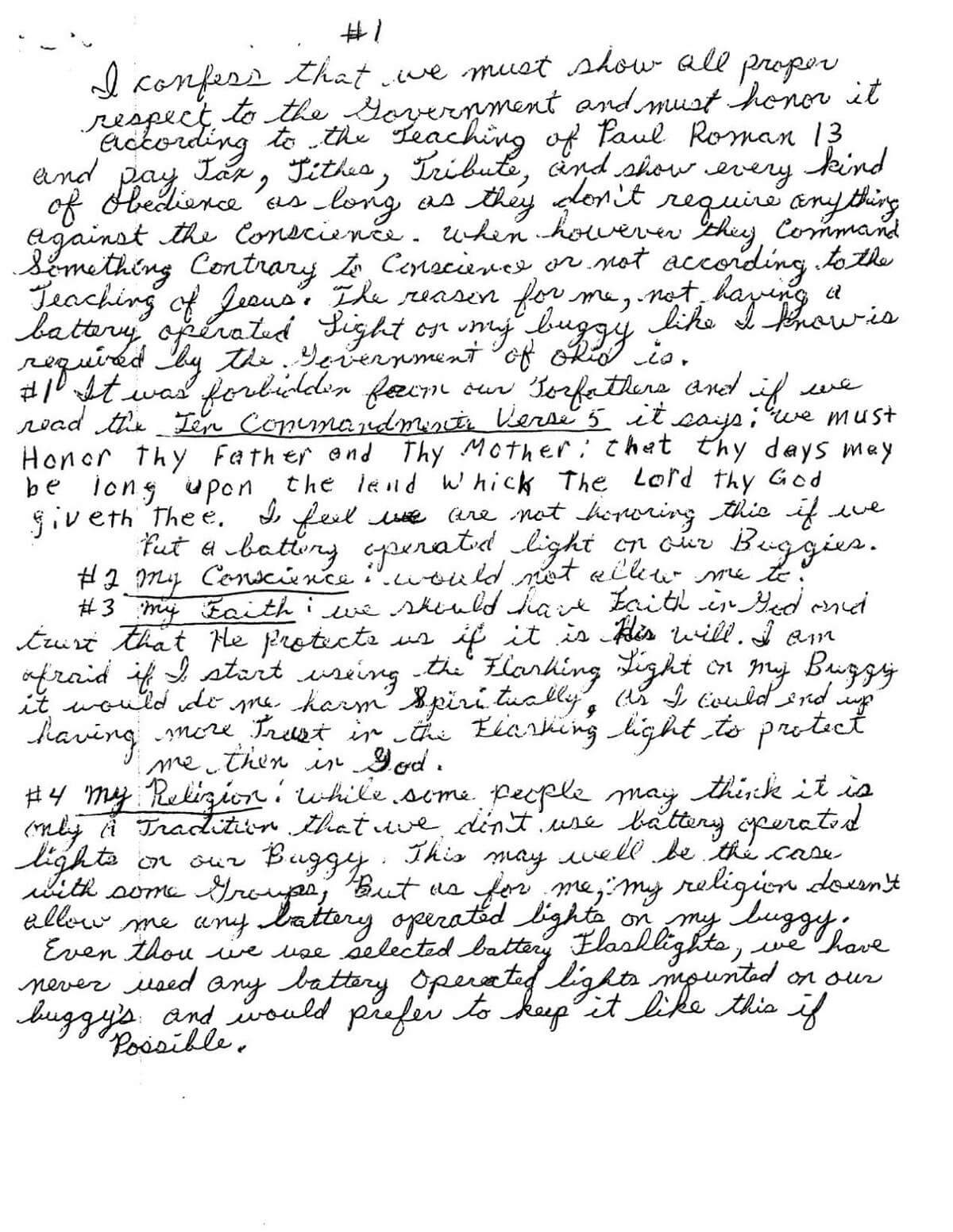 Hostetler notes that “we must show all proper respect to the Government and must honor it according to the teaching of Paul Roman 13 and pay Tax, Tithes, Tribute and show every kind of obedience as long as they don’t require anything against the Conscience.”

He then lays out what prevents him from adhering to the new law, explaining why it conflicts with his conscience, faith, and religion. One of those justifications is that “I am afraid if I start using the flashing light on my buggy it would do me harm spiritually, as I could end up having more trust in the flashing light to protect me than in God.”

There is also one interesting note in the finish. Hostetler writes: “Even though we use selected battery flashlights, we have never used any battery operated lights mounted on our buggy’s and would prefer to keep it like this if possible.”

I don’t know if this last line suggests openness to compromise, or simply is meant to reflect humility. I would guess the latter.