Most Amish farmers are conventional farmers. But organic farming has taken off in some communities over the past decade or two despite some practical and cultural roadblocks. 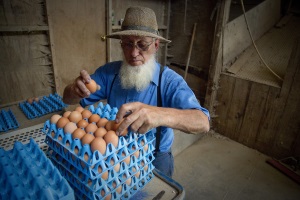 One of those communities is the Kalona, Iowa settlement, where today you’ll find over 90 certified organic operations, described in a recent Washington Post article as “one of the densest clusters of organic farms in the United States.”

Amish dairy farmer Eldon T. Miller (pictured) helped spread the idea of organic farming 20 years ago. But Amish farmers aren’t happy today, due to what they see as unfair competition from large organic producers. The gist of the matter:

A glut of organic milk has sunk prices across the United States, threatening livelihoods and rekindling long-standing suspicions that some of the large organic dairies that have emerged are swamping the market with milk that does not meet organic standards. Over the years, some of these very large dairies, most of them in the West, have been cited for violating organic rules by the USDA or inspection agencies. To the chagrin of many here, most have been allowed to continue operating.

Over the past year, wholesale organic milk prices have dropped by over 1/3 in the Kalona community.

Amazingly, about one out of every six or seven gallons of milk is sold at conventional prices or is simply dumped (a practice which is apparently happening across the industry).

One of the nation’s largest producers, Aurora Organic Dairy, (supplying outlets including Walmart and Costco) was reported last month to have not meet organic grazing requirements.

Farmers in Kalona and others suspect that Western mega-dairies may be consistently failing to meet grazing standards. Herd sizes at large dairies can exceed 10,000, while Kalona Amish herd sizes are below 100.


Here’s the practical issue with those massive herds:

The larger the herd, the more pasture is required to feed it. But at a certain point, the acreage needed to feed a herd grows so large that it’s impractical to expect a cow to walk all the way to the pasture’s outer edges to graze and then back to the barn, typically twice day, to get milked. Some farms do have multiple milking facilities.

“We know with that high concentration of cows that it’s impossible to meet the grazing rule,” Swantz said. “They’re not organic. No way.”

During a break driving a steel-wheeled tractor over his fields, Amish farmer Glen Mast asked, “Fifteen thousand cows out there, and that’s certified organic?”

“The cows would go hungry looking for grass,” Miller said, asserting that the Iowa pasture is better than any out West. “Those cows probably get as much cactus as grass.”

Cornucopia, a watchdog institute, feels the USDA is not doing enough to find and enforce violations against the big players.

According to the organization’s Mark Kastel: “Most times, they don’t even investigate. And when they find a problem, there’s very little punishment, if any. It’s a gross betrayal of the spirit of the organic law.”

Has the time to go organic passed?

Organic farming probably looked like a great opportunity five to ten years ago. At that time organic dairy seemed to be transitioning from a novelty phase to something more accepted among Amish. Ten years back I would run into Amish organic farms from time to time but they were still somewhat a rarity.

But the ones who were doing it were quite enthusiastic about the significantly higher milk prices (once you get through the three-year conversion period of course).

Now as is typical, more players have entered the industry and the bigger businesses are leveraging their scale – even though I’d argue the very perception of “organic” farming suggests a smaller more labor-intensive operation (incidentally more aligned with the image of the typical Amish farm).

Marketing organic milk from 10,000-cow mega-dairies feels something like selling mass factory-produced chocolate chip cookies as “homemade”. Even with the cute elves on the box I know these cookies didn’t come from grandma’s kitchen.

In any case, if the perception that large producers may be skirting the rules spreads, consumers are likely to get more discerning about who is producing their organic products.

According to the article, Costco plans to continue using Aurora, while Walmart has not made a statement on whether it will continue with Aurora.

Small-farm organic producers like the Amish at Kalona are no doubt hoping the USDA will do better at finding suspected violations (assuming their suspicions are accurate).