Ex-Amish Army Veteran Recalls His Excommunication A Half-Century Ago

“You’re supposed to defend yourself if you’ve been aggressed upon.”

That’s what Ora Hochstetler, now 82, says in his own defense, a half-century after his excommunication from the Amish church.

He likens it to a famous battle from Scripture:

“Kind of like David and Goliath. I don’t believe in just going out and boom, kill somebody, but if I’m aggressed upon, I believe in defending myself.”

Ora served in Germany as an army medic in the early 1960s, after being drafted at age 25, as reported in a profile in the Warren, OH Tribune Chronicle. This was followed by several more years in the reserves. 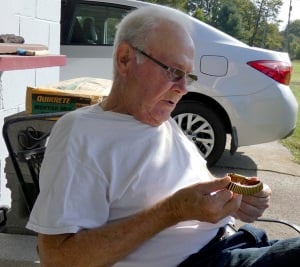 He mainly helped people coming in with injuries – “work[ing] on anything life threatening to prevent the soldier from dying.”

Hochstetler said others from his area served, including his younger brother.

Amish eventually had alternative service programs that they could opt into rather than entering the military, such as service in urban hospitals as orderlies.

However it’s likely that these did not become a viable option until later (the Amish Steering Committee, which represented Amish interests in this matter, was not organized until 1966), meaning Hochstetler likely did not have an alternative service option as readily available to him.

Hochstetler eventually decided returning to the Amish was not for him:

If he wanted to, Hochstetler could’ve gone back to his Amish ways and worked his way back into the community. He consulted with a pastor about what to do and was told that “it doesn’t matter what they say. It’s between you and God. When the day comes, you stand before the Lord.”

Hochstetler said the hierarchy consisted of Old Order Amish and when he was married in 1965 and settled into his home, he decided to not go back to his community. He was baptized into a new faith and said he became free.

To this day, Hochstetler said he wishes his family could see the sacrifices he and the other soldiers made for this country. He also wishes everyone could see how important the soldiers’ sacrifices are.

“Enjoy your freedom and respect those that defend that freedom. I would go again if I was younger, but I’m a little past the age now,” he said.

Read more on the Amish and non-resistance and military conscription.