An Amishman in Custer County, Colorado is seeking a permit to build a commercial dog breeding facility. Animal welfare activists are speaking out against the idea, fearing the planned business to be a “puppy mill”.

Amish have received a lot of bad press for some egregious cases involving members of Amish churches. This has helped foster a perception that the Amish do not treat their animals well–at best raising dogs like livestock, at worst keeping them in deplorable conditions and killing unwanted animals.

Do all Amish treat their dogs poorly? No, but the sad fact that some have done so has attached a stigma to Amish breeders. And there have been enough cases that it’s no surprise the reputation of all Amish has suffered as a result.

This is likely on the minds of those speaking out against a planned breeding operation in Colorado. Amishman Martin Troyer would like to open a kennel housing about 30 dogs. 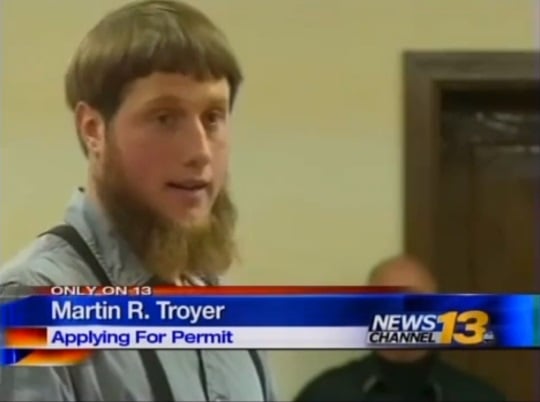 “My biggest concern is the welfare of the dogs,” said a local dog rescue worker. “Any kind of breeding at this level, the breeder is just looking at it to make money.”

Troyer seems to understand the concerns. “I think the people here who are writing these articles would be insurance that these animals would never be neglected. We would be a puppy business…People could come in and inspect the puppies.”

Troyer says he has consulted with breeders in Ohio on how to start the business. I wonder if they discussed public relations as well.

I don’t know what percentage of Amish breeders vs. English breeders would qualify as “puppy millers”.

But I do know that when an Amish person makes news for something, all things considered, it travels further and wider than if the person were English.

This is true for both the good (think of Nickel Mines forgiveness or heartwarming “Amish aid” stories), and the bad.

The short clip below includes comments from an activist, and from Troyer: