Like other items of Amish clothing, there are quite a few different styles of women’s coverings, and some with rather subtle differences. 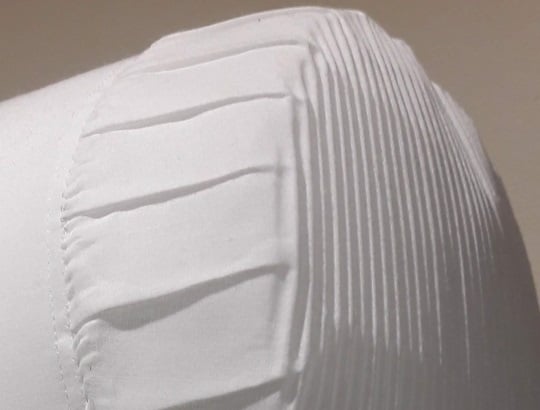 I stopped in at the Amish & Mennonite Heritage Center in Holmes County last month, which houses various exhibits including a display of Plain women’s (mostly Amish) head coverings. I took some photos of the various coverings which you can see in full here: 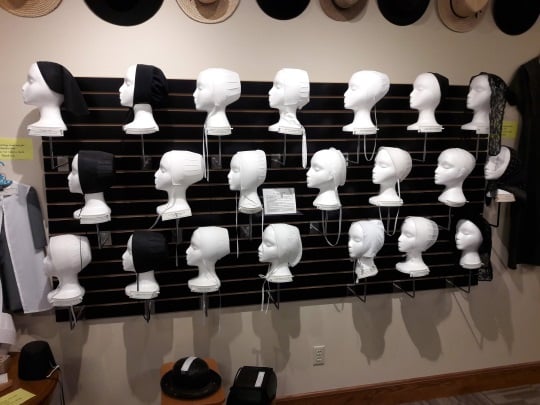 I wanted to show you differences between these coverings by taking a closer look at some of these examples, drawn from different communities and affiliations.

A few quick things worth noting about the head covering (aka prayer covering or kapp).

First, Amish wear Plain clothing for several reasons, including modesty, practicality, and identity (see this article for more). Amish can also look to Scripture for a basis to this particular practice (see for example 1 Corinthians 11:2-16, including “But every woman that prayeth or prophesieth with her head uncovered dishonoureth her head: for that is even all one as if she were shaven”).

Second, the prayer covering is different from the bonnet, which is the larger covering which goes over the kapp and is often worn when traveling or going to formal occasions. Prayer coverings are often mistakenly called bonnets.

Finally, women and girls may wear different coverings, and this can also vary on the situation (ie coverings worn at church or while working). You’ll see a few examples of those below as well.

But the “mainstream” Old Order group in Holmes County outnumbers all other groups put together by close to a 2-to-1 margin. So this is the covering you’re most apt to see in the community. 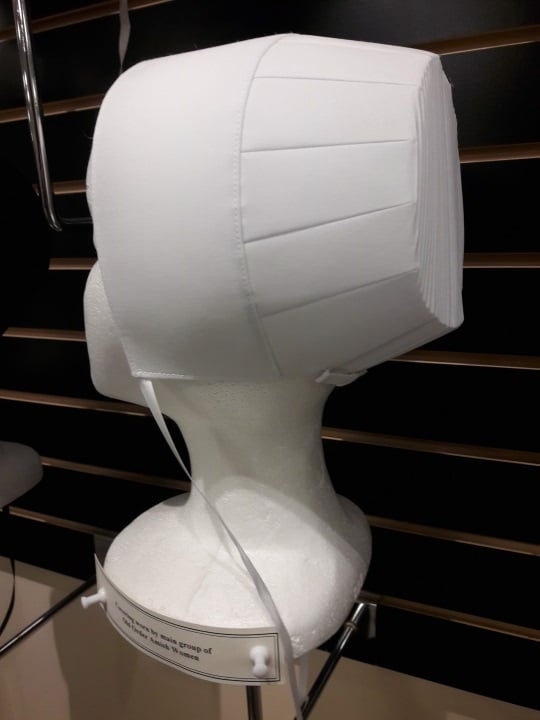 In comparison here’s the covering worn by their neighbors the New Order Amish. You can see that this one is more elongated and is less angular. In this case the material is also different, but I don’t know if that is a general trait or if this one is simply made from a different type of cloth. 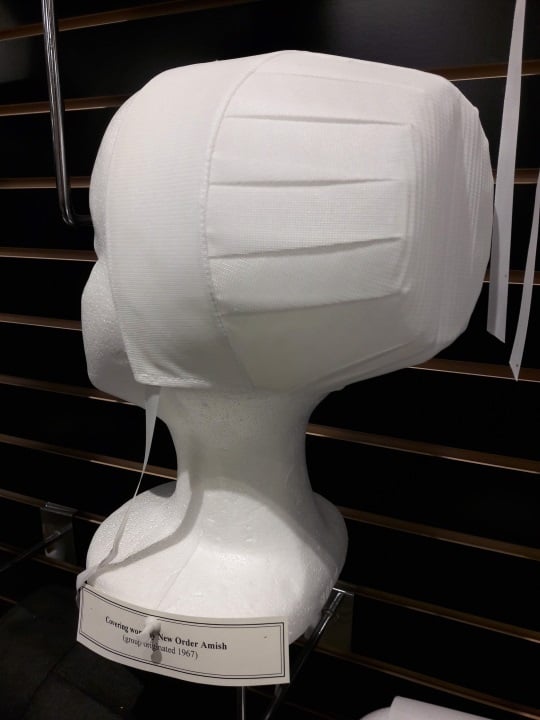 Here is the “Dan Amish” church covering (aka Andy Weaver Amish), a plainer group. This one is more compact, fitting more closely to the head: 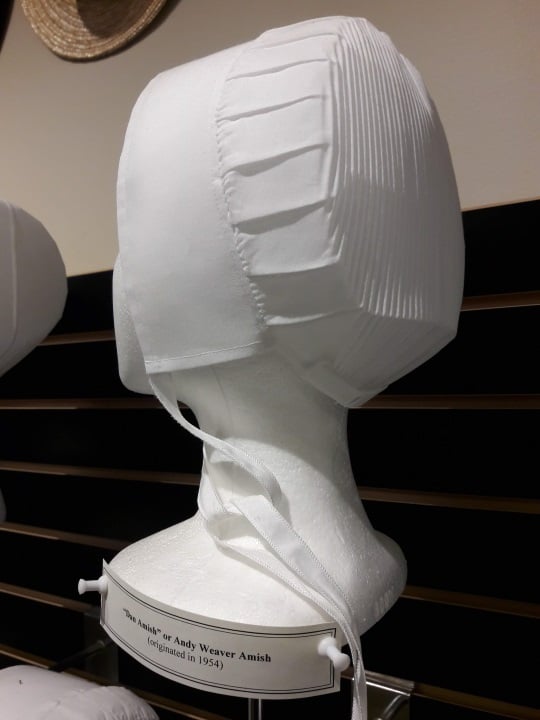 And from the plainest group of all those in Holmes County, the Swartzentruber covering. The finer pleats on the back come around onto the sides and create a downward swooping effect: 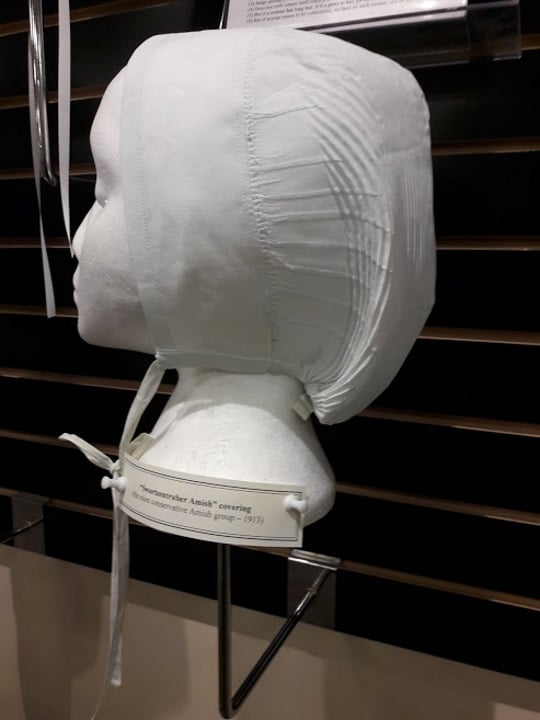 There’s also this covering, described as being “worn by some in the new Amish settlements.” The description says that “the back of the covering does not have the fine pleats or creases found in many Amish communities” which you should be able to tell by this photo, even though the angle is more side-view: 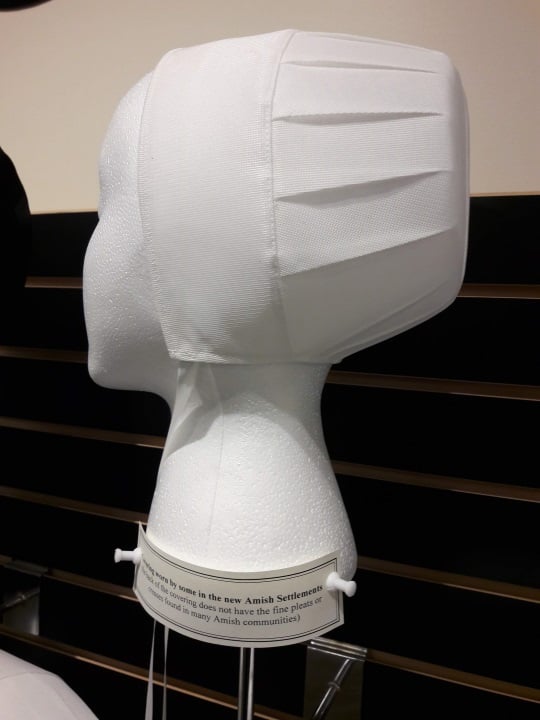 Heading north, here is the covering from the Geauga County settlement. Proportionally, the flat sides are much larger compared to the pleated portion of this kapp: 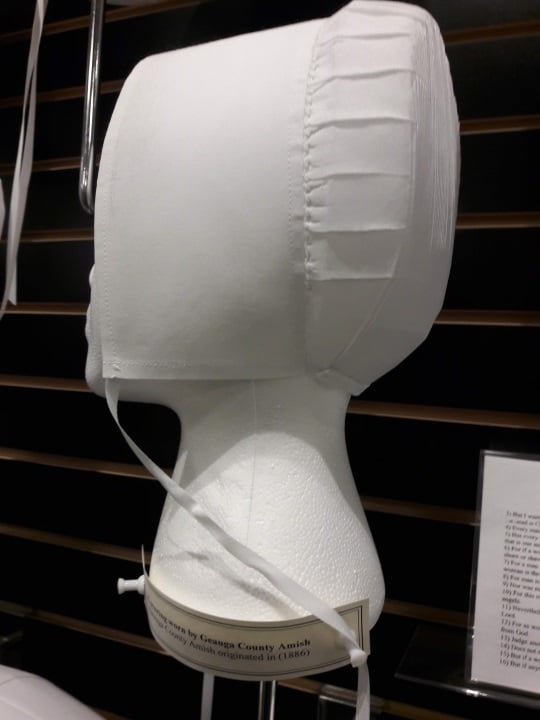 Leaving Ohio, here we have the Lancaster covering, with its distinct heart shape: 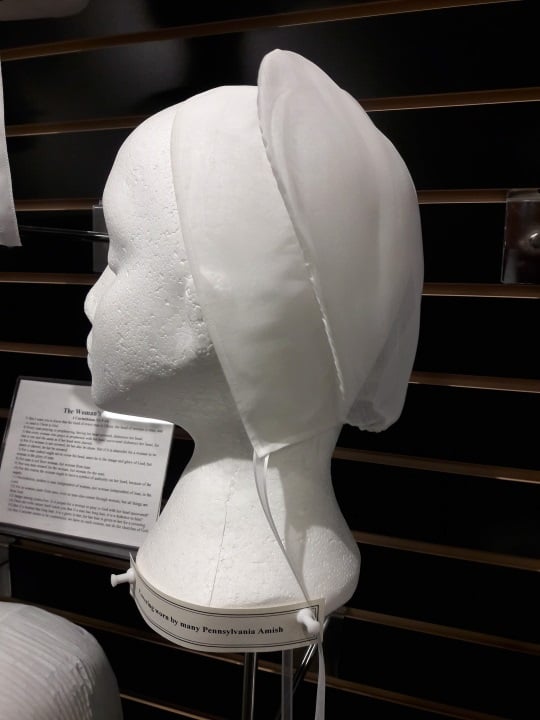 And another group associated with Pennsylvania, the Nebraska Amish, found mainly in Big Valley in the center of the state. Compared to the others, this one seems to have the least defined form of all, and the sides are not stiff like many of the Ohio coverings: 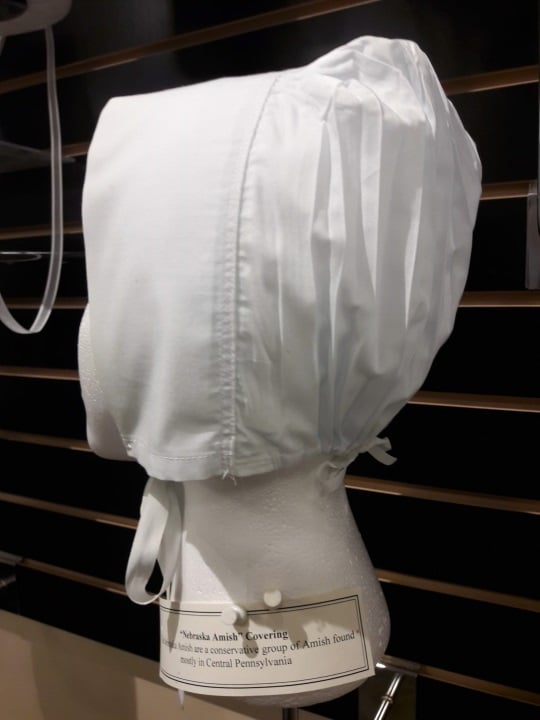 While we’re with the Nebraska Amish, it’s worth mentioning the special hats that this group wears. Several years back we had a post on these unusual scoop hats which are unique to this group: 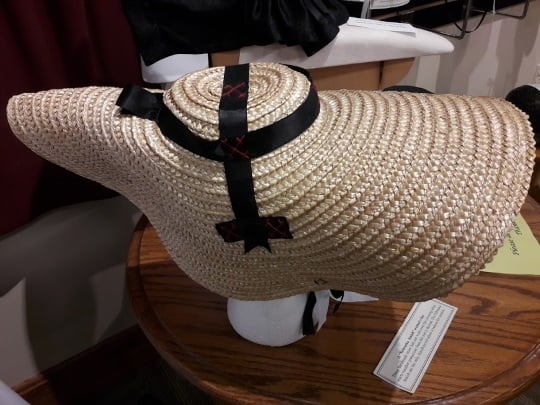 Here’s the description of this odd hat: 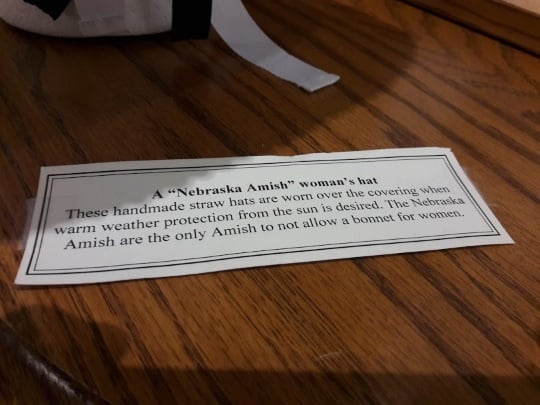 Here’s the covering we saw in the 5 Mystery Photos post – from Milverton, Ontario. This is worn by Amish girls in the community: 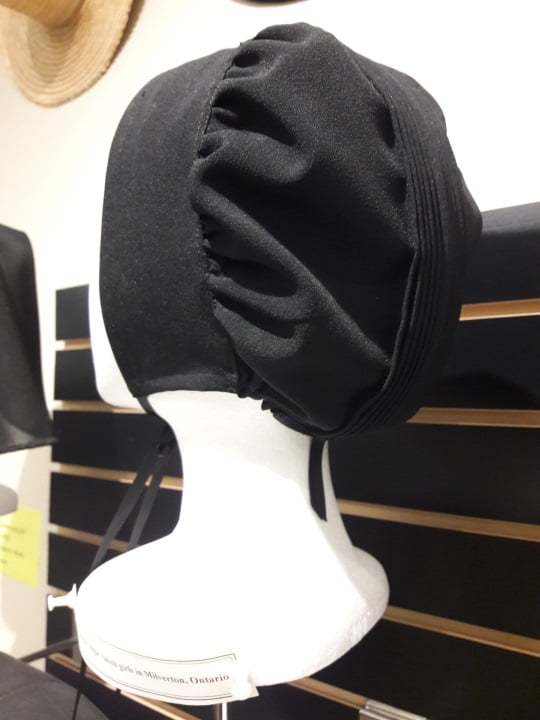 And here’s a bonnet from the same community. As you can see, this is a much heavier material and protects better against the elements when outside or traveling in a carriage: 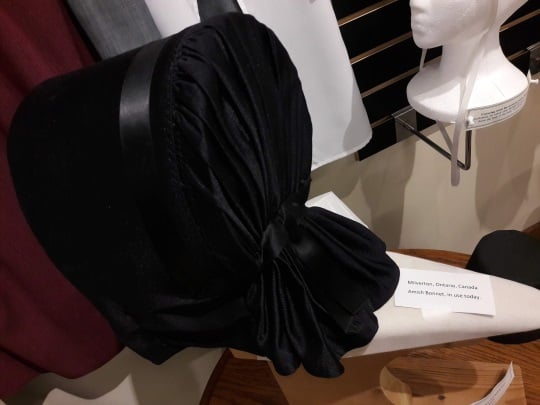 So here are some coverings for special circumstances. First, a veil which is worn by Mennonite women and also some Amish “when doing tasks that might damage the shaped white covering”: 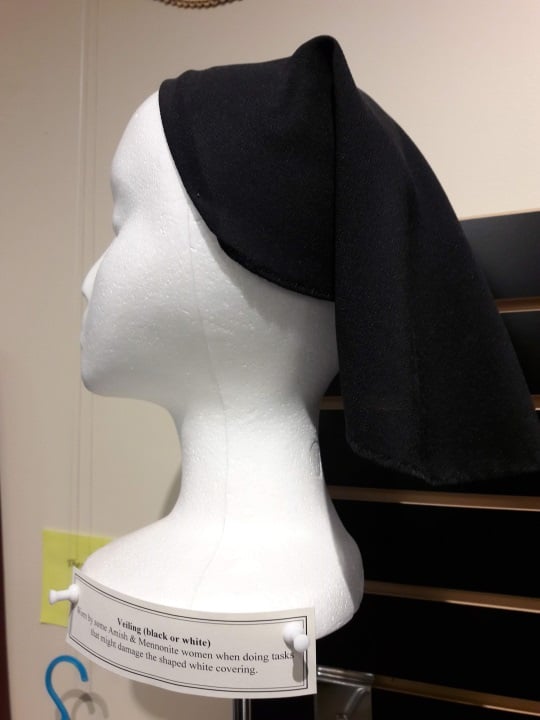 A covering worn by unmarried girls to church: 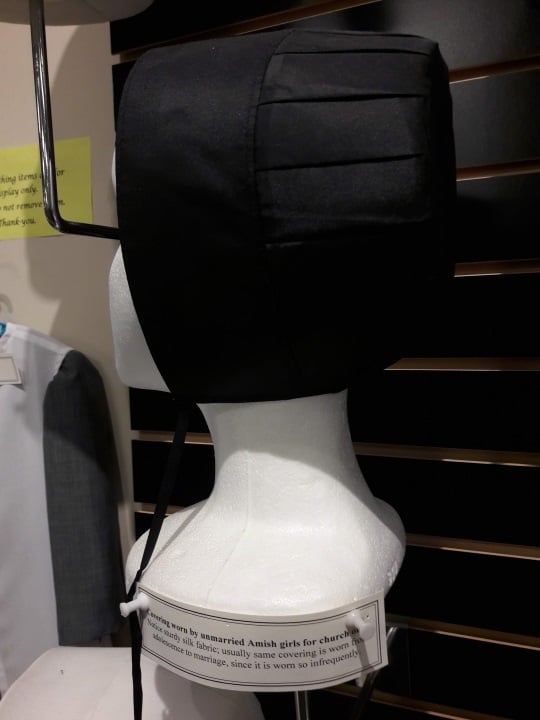 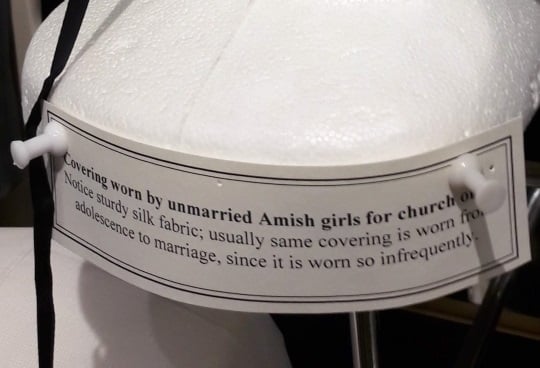 And finally a covering worn by some girls while working: 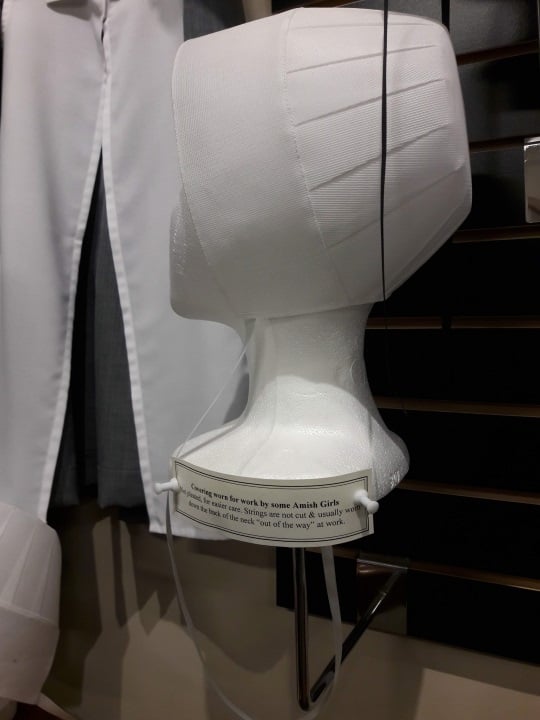 Its simple design is practical: 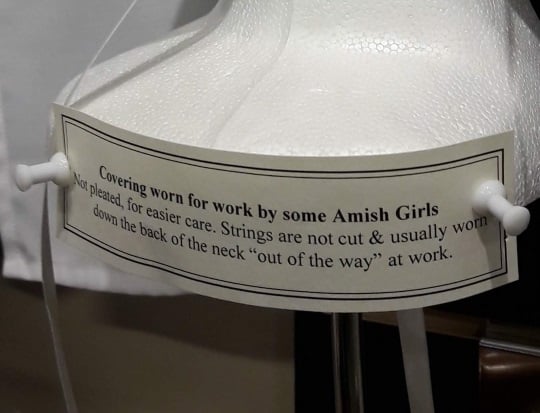 I hope you enjoyed this look at various head coverings from across multiple Amish communities.

And if you’re visiting Holmes County, a stop by the Amish & Mennonite Heritage Center is a great way to spend several hours. These coverings and the rest of their exhibits are well worth examining up close.