Weddings are happening right now in many Amish areas.  Amish weddings are joyous events but also social obligations.  With the interweaving web of family connections, and weddings often happening on the same day during wedding season, Amish families may have to juggle their schedules and make decisions on which to attend.

Further complicating things is being invited to weddings in other communities.  I recently spoke with a Lancaster friend who has an invite to a wedding of a somewhat distant family member living a few counties away.  He was leaning towards not going, and, tongue-in-cheek, hoped he would be “forgiven” for the “transgression”.

For others, a distant wedding may be an excuse to not only visit family but to take a cross-country trip.  A few years ago other Lancaster friends attended a marriage ceremony in a sister settlement in Wisconsin, meaning a grueling van ride but also, by how they spoke of it, an experience to remember.

Traditionally the autumn months are the time for weddings, particularly in Lancaster County.  In other places the wedding schedule is more flexible for various reasons, some of which might not be so apparent.  On weddings in Holmes County, Ohio, Charles Hurst and David McConnell write that “An unintended consequence of the adoption of home freezers is that the traditional wedding months of November and December have, since the mid-1980s, given way to May, June, September, and October.  Now that farming is on the wane and food can be kept cold year round, there is no need to coordinate weddings with the harvest” (see An Amish Paradox, p. 108).

Noah Coleman of Bill Coleman Photography writes on wedding customs of Amish in the Big Valley area of central Pennsylvania:

Amish courting is usually very discreet in the Amish community. In fact, weddings are often announced just 3 and 4 weeks ahead of time. Usually the entire community is invited to the bride’s or groom’s family farm. It’s not uncommon to see 300 people in attendance. Generally, Amish weddings occur in November when the harvest is completed and when the celery is finished growing. The wedding meal is a carefully planned event where food is served to groups in rotation to manage the sheer number of people. Celery at Amish weddings are as ubiquitous as flowers are in modern weddings. A mason jar of cut celery sticks sits on every table.  Some say that you know when a family is preparing for a wedding by how much celery’s growing in the garden.

Interestingly celery is a part of weddings in some area, but not in others.  Saloma Furlong, originally of the Geauga County, OH Amish, writes here about how she only learned of the custom after she left the Amish.

Noah also shares a few photos of Big Valley Amish weddings, along with some comments in italics. 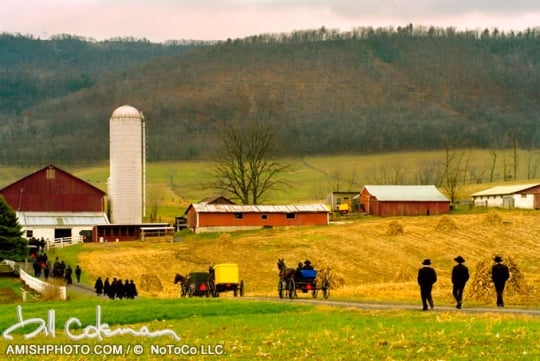 This first one is called “November’s Wedding”.  “There aren’t many “June Brides” amongst the Amish. Most Amish weddings take place in the Fall months, as they are too busy for such matters until after the harvest is in.” 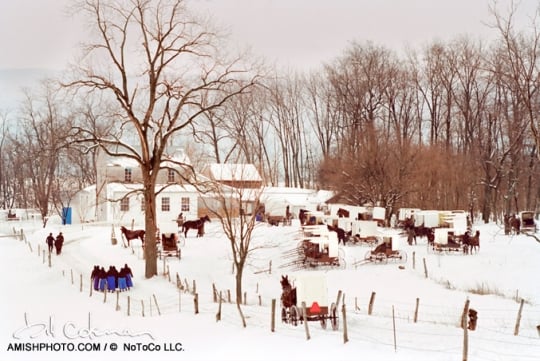 Next, “January’s Wedding”.  “A rare event, as weddings normally occur in November, the celery had to be store bought! This was a bitterly cold late afternoon wedding but the happiness on their faces warmed my heart!” 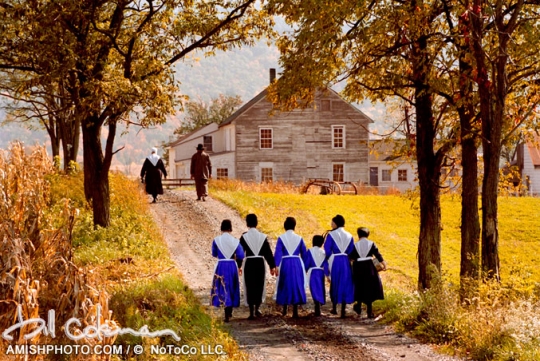 Finally, “Sarah’s Wedding”.  “Sarah is one of seven sisters and her wedding was one of five in as many years. This family had their hands full for quite a stretch of time.”

Thanks to Noah for sharing a little on Amish weddings today.  You can also view more of Bill Coleman’s Amish wedding photos.  And feel free to add your Amish wedding thoughts, questions or experiences below.