Amish America:  Your book Train Up a Child:  Old Order Amish and Mennonite Schools examines parochial schooling among these related groups. In a recent interview for NPR you highlight the diversity within Amish schools themselves. 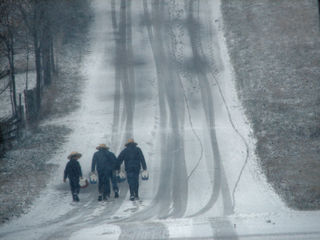 Could you comment on some of the differences found among schools in different areas and affiliations? And could you share some of the general insights you’ve gained examining Old Order education?

Professor Karen Johnson-Weiner:  Visiting schools was great fun for me, and I was struck by the diversity of Old Order education.  It became very clear to me that Old Order schools/education played a key role in the Old Order response to modernity.  In every way–pedagogy, subjects studied, books used,patterns of language use, songs sung, parent-teacher interaction,schools reflect the Old Order community.

In Swartzentruber Amish schools, for example, children have a very restricted curriculum that includes only arithmetic, reading, spelling, German, and penmanship. They sing only in German (and German is used often in the classroom). Parents generally do not visit the classroom; there are no gatherings of teachers; children learn by rote using reprinted textbooks from the19th (McGuffey’s Readers) and early 20th century (e.g. Strayer-Upton arithmetic).  They don’t learn much about the world around them, which is ok because the community likes to keep interaction with that world to a minimum.

A sharp contrast are schools in the Elkhart-LaGrange (IN) Amish settlement, where children have art, geography, health, and history in addition to English, arithmetic, and German.  These children are encouraged to ask questions, and teachers spend more time explaining.  There are field trips, parents visit schools regularly,English songs are sung, and the books used are likely to have been written by Old Order authors.  The children leave school relatively knowledgeable about the non-Amish world, much more fluent in English(speaking, reading, and writing), and prepared for a life in which they may well be working for non-Amish employers.

Some children in the more progressive communities even go on to get their GED diploma.  Some communities (e.g. Lancaster County) still maintain the “vocational school” or Friday school, which is for children who have finished the 8th grade but are not yet at the age to leave school.  Many communities have abandoned this practice.

On that note, in a handful of instances in Ohio and Indiana I’ve been surprised by the rare Amish family with children apparently attending high school.  Some Amish entrepreneurs do complain of a lack of certain types of knowledge, which would come in handy when running a business—for  example, in accounting.  Would you ever expect that high school, or perhaps a parochial Amish version of it, could be accepted in Amish society?

I don’t see communities developing “Amish high schools” in the foreseeable future,though it is not out of the question.  Some teachers I talked to in Elkhart-LaGrange speculated about this.  (And some of these had gotten their GED diplomas—they are quite aware that they are working side-by-side with non-Amish workers who would not have been hired without their HS diplomas.)  Interestingly, the Horning Mennonites in Lancaster County (the Weaverland Conference or “Black Bumper”Mennonites) have added 9th grade to some of their schools.  (Not all Horning Mennonites in Lancaster County attend WM schools—many go to the Old Order schools, in which they cooperate with the Wenger or Groffdale Conference Mennonites and the Old Order Amish.)

And passing on a question from a reader of the blog, as far as you know do university-educated, Amish-raised individuals ever ‘return’ to join the church?

I don’t know of any university-educated Amish who have returned to the Amish church.  It certainly could happen.  One Swartzentruber bishop was once in the Air Force, so anything can happen!

What would you say to critics who feel the Amish stifle opportunity in their youth by restricting education to eight grades?

I think the Amish stifle their children to the same extent we stifle ours with our expectations for their education.  Each culture educates its offspring to perpetuate the culture.  Many Amish might say that we shortchange our children by expecting them to learn important lessons from books rather than by working with their parents and others in the community to contribute in a real way to their families and the church.  They might also point out that children in the mainstream are often isolated from the values of home and community—and that mainstream parents have too often abdicated responsibility for the upbringing of their children to adults whose values and interests are not those of the parents. 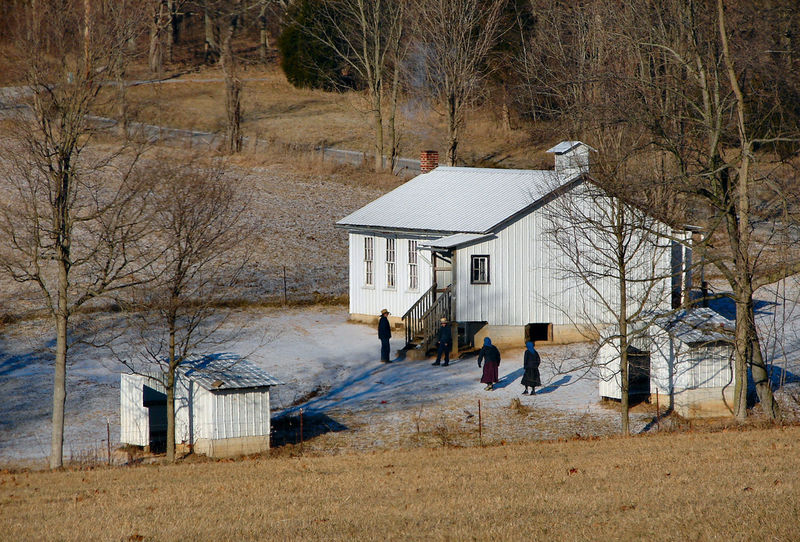 photos (here and above): Indiana Amish by Cindy Seigle

In last year’s The Amish and the Media, you authored a piece on Amish publishing and the differences between school texts produced by the Gordonville Print Shop of Lancaster County, Pennsylvania, and those of Pathway Publishers in Aylmer, Ontario.  You also discussed the difference between the concepts of ‘schooling’ and ‘education’.

Could you describe the key differences between these two Amish-run establishments, and the texts they produce, and also what exactly is meant in Old Order circles by the ideas of ‘schooling’ and ‘education’?

The difference between “education” (the inculcation of values) and“schooling” was first highlighted by Gertrude Enders Huntington.  I think it is particularly useful in understanding the role of schools in very conservative communities, such as the Swartzentruber communities,in which schools seem to exist largely to meet legal requirements and to provide skills that can’t be acquired at home through shared labor with family and friends.  In these communities, which emphasize farming and a family-based economy, all work together, and the important lessons are learned by working with others.

The Gordonville Print Shop and the Pathway Publishing Corporation are two Amish-owned businesses that began (at least in part) in response to the need for textbooks for the growing number of Old Order schools. The Gordonville Print Shop has concentrated on reproducing texts the Amish used when they attended public schools.  The feeling was that,since these books were suitable then, they are suitable now.  These books help reinforce a pedagogy based on rote learning, and encourage a mastery of basic information and respect for authority, while, at the same time, downplaying engagement with the material, critical thinking,and question asking.  These archaic texts also limit the students’ involvement with the non-Amish world by presenting a world that no longer really exists.

Pathway has taken a different way—the editors have developed textbooks specifically designed for Old Order students, incorporating Amish values into the school material.  Some of the more conservative groups have found this threatening—it seems to make the schools responsible for teaching religion, which should be the role of the parents and church.

There are other publishers of Old Order texts, notably Schoolaid, a Wenger Mennonite-owned press in Lancaster County, and Study Time, an Old Order Amish publisher in the Elkhart-LaGrange settlement.  Both were started by folks who had previously worked for Pathway (Alta Hoover started Schoolaid, and Delbert and Linda Farmwald began Study Time), and both are producing material designed specifically for Old Order schools.

And would you have an idea of how common each type of text is?

Thanks very much for your insights, and could you share anything about other projects you are currently working on or have planned?

Right now I am working with Drs. Donald Kraybill (Elizabethtown College) and Steven Nolt (Goshen College) on a study of the Amish in the 20th Century.  This will result in a book and a number of articles.