What do Amish wear to church? In addition to their many women’s head coverings, the Amish & Mennonite Heritage Center also has several items of church clothing on display.

First of all, a woman’s cape and apron: 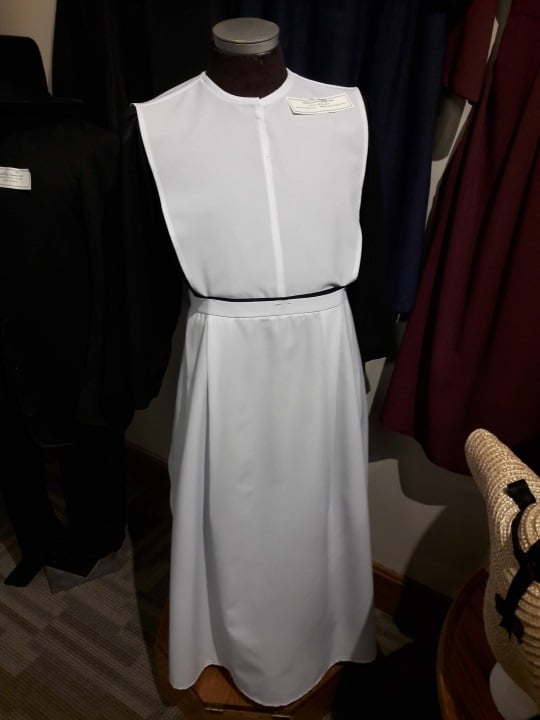 The cape and apron are commonly worn on Sunday across communities (we had a look recently at Amish wedding clothing, showing another example of this). Styles and colors can vary by community however.

You will see capes and aprons in other colors besides the white above typical to Holmes County – including black and blue. White however tends to be common for church in many communities (Stephen Scott’s book on Plain clothing, Why Do They Dress That Way? gives a chart comparing styles across settlements).

Unmarried girls may also wear different colors in some communities, such as in Lancaster County where they wear a white cape and apron, while married women wear a black cape and apron. 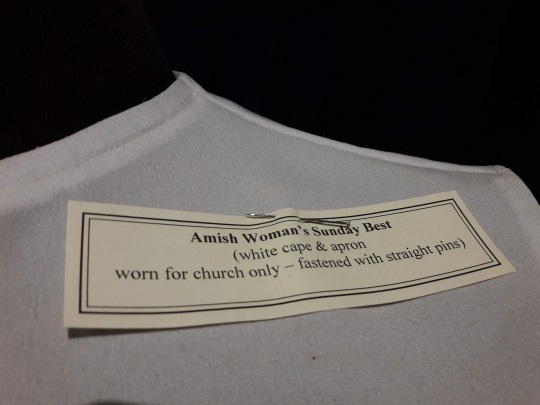 In Why Do They Dress That Way? we read this about the cape:

The kerchief or cape is worn by nearly all plain women from all the various groups. It is also found in many surviving folk costumes of western Europe. Its wide appeal to pious country women is no doubt based on the modesty it provides. The extra covering is seen to conceal the neckline and the form of the bosom and provides privacy when nursing a baby.

As for the apron:

The apron, like the cape, has been regarded as an extra covering for the sake of modesty. Jacob Brubacher, a prominent Mennonite bishop of the 19th century is said to have made the statement, “The cape to cover the bosom, the apron to cover the abdomen. (Der Cape fer die Bruscht zudecke und der Shatz fer der Bauch zedecke.)” While many of the more moderate plain women have dropped the apron but retained the cape, the Old Order woman very rarely appears in public without an apron.

Styles vary as well here. Steve gives the example of the Amish in Adams County, Indiana, who tie their aprons in the front. Outside of church, you might not immediately notice that an Amish woman is wearing a cape and apron because they may be the same color as the dress.

Here you can see the straight pins holding the apron in place: 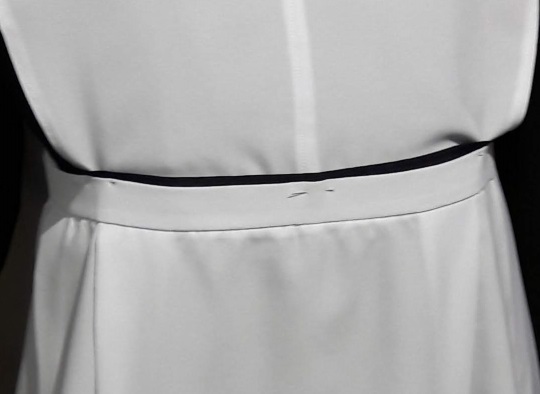 Next you have the man’s clothing – the Sunday suit coat with hooks and eyes. 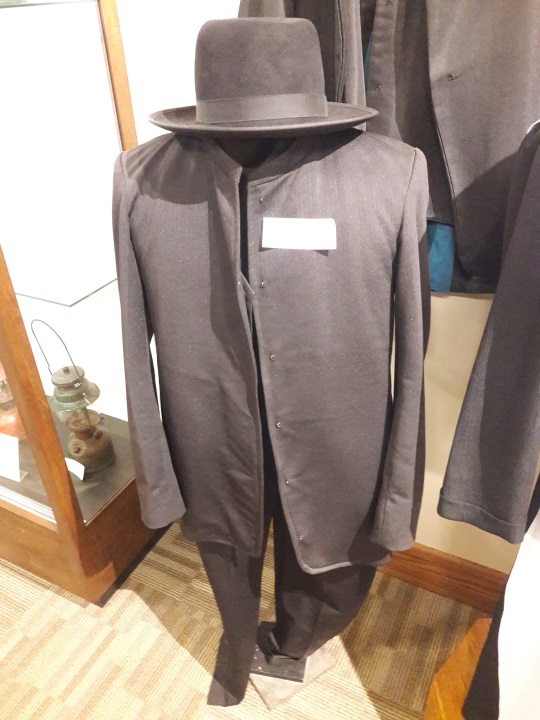 Stephen Scott writes: “This style with a standing collar became known as the plain frock coat or “mutze” among the plain people. Nearly all Old Order plain men wear this kind of coat for church and other formal occasions.”

There is also another type of coat called the wamus, though that’s a term I really haven’t heard much in the Amish circles I spend time in. Steve writes that “In many Amish communities sack coats (wamus) without outer pockets are worn by men for non-church occasions, while nonmember boys wear this type for church as well.” 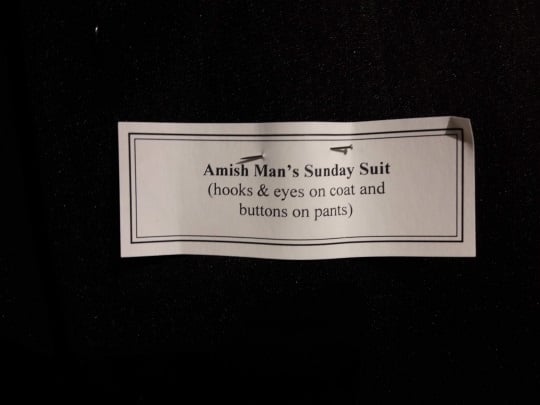 Wearing of the suit coat can vary. For example, in the community at Belle Center, Ohio, for regular church members it is seasonal, while ministers wear it year round.

When I have attended Amish church, I have more often seen just the several ministers in attendance wearing it, so I think that pattern is fairly common. There are no pockets or lapels and is rather simple in design. Here’s a closer look showing hook and eyes: 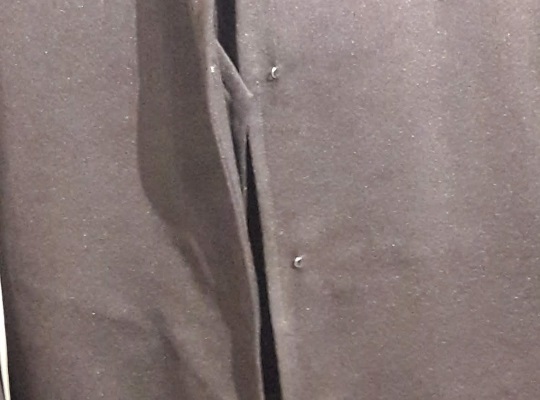 The Center also has on display what you might call an “heirloom” dress of Amish woman Mattie (Kurtz) Miller, who lived from 1880-1942. 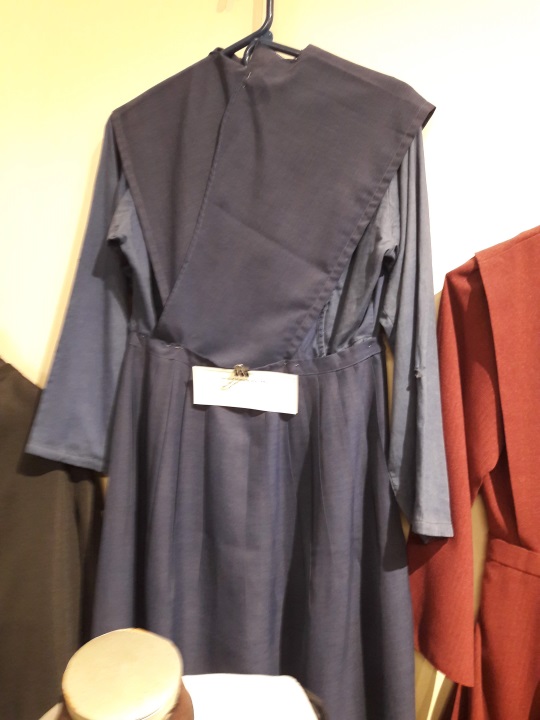 There is an extra bodice, and the back of the cape is pleated. You can see the cape is a dark navy or gray color. 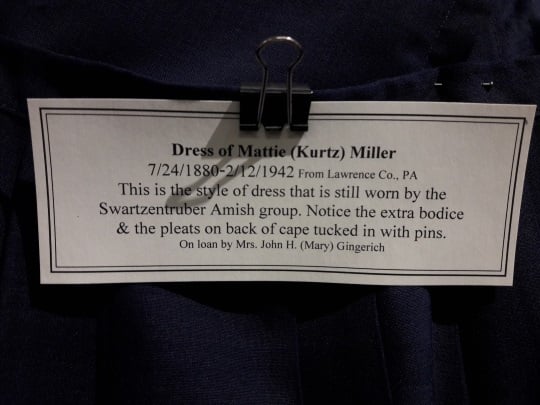 For church, however, both Swartzentruber women and girls would wear white capes and aprons.

I hope you’ve enjoyed this closer look at some items of Amish clothing. If you’d like to see this and other exhibits in person, this is where you’ll find them: