Why is this news? It’s notable because it’s the first example of a new, more deliberate strategy of creating Amish settlements.

Amish have actually lived in York County for quite some time. But these Amish have been considered a part of the greater Lancaster County settlement (which also stretches into Chester County to the east). 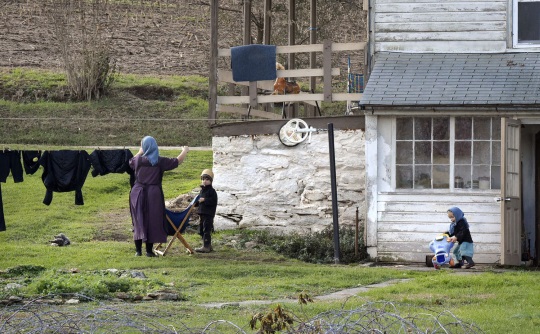 In fact, Raber’s Almanac actually lists 4 churches in York County, including in the area of Airville, which we’ve featured here regarding the local mud sale. These churches are not too far over the Susquehanna river border separating Lancaster County from York County.

This new community is actually geographically more distant, in the area of Glen Rock – about half an hour west of the other York County Amish by car.

There had been a few Amish families in southeast York County before, but they would return to Lancaster County to worship, crossing the Norman Wood Bridge. This, by contrast, is a true “daughter settlement.”

The Amish say it’s taken hold and is flourishing. There are more than a dozen households, totaling more than 70 people. There are three ministers, so the settlement can hold church services.

Glen Rock is in the area of the Markets at Shrewsbury. Long-time readers may recognize this PA Dutch market from previous posts about the market’s “cruise night” and on one of my favorite places to grab a bite, Country Style Deli.


This was also where we filmed a piece with CNNMoney on Amish businesses back in 2010.

The Glen Rock community was started last year, but does not seem to be listed in the 2017 Raber’s Almanac.

A New Model of Founding Communities

Amish form new communities all the time. So why is this potentially a big deal? It’s because this is something new for the Amish – a more structured settlement effort:

Lancaster’s Amish have founded daughter settlements before. What makes this one different is that it’s a trial run for what scholars of the Amish say is a new idea: A program of well-planned and possibly community-supported migration to help ease population pressure and land scarcity.

Up to now, Amish migration from the Lancaster settlement has been “ad hoc,” said Steven Nolt, senior scholar at the Young Center for Anabaptist and Pietist Studies at Elizabethtown College. Historically, “there hasn’t been a communitywide planned strategy” for outmigration.

“We’ve never really had that piece before,” he said. “That could potentially be a game-changer.”

Steven Nolt and Donald Kraybill elaborate on the challenges of “ad hoc” migration:

Daughter settlements aren’t hindered, but as Nolt noted, they’ve been “ad hoc,” expected to make their own way. And that exposes them to risks that can lead to failure.

There may be unexpected startup costs. Migrants may have less access to the Amish’s staple tools, such as buggies or hydraulic pumps, Kraybill said.

Would-be dairy farmers may discover there isn’t an accessible market for their milk. They may clash with township officials over zoning or other ordinances.

Internal disputes may arise over how conservative to be, impairing the harmony needed in a small, close-knit community.

What’s the thinking behind this new approach? An Amishman involved in the new community explained:

What’s needed, the Amishman involved in the Glen Rock settlement said, is a program consciously designed to reduce risk.

He believes settlements need a minimum of five to 10 families. Then, those families need to sit down and reach agreement on the character they want the new settlement to have.

They may lean more or less conservative, but they all have to be on the same page. And the more they can figure out practical matters ahead of time, the better.

Only then should they start looking at possible locations, he said.

It’s tempting to put the search for land first and foremost, but it’s a mistake, he said. It needs to be “culture first, real estate second.”

When the discussion does turn to land, one potential advantage of a more systematic approach could be a greater awareness of the broader rural real estate market.

Untapped areas could be researched, and if daughter settlements could be established more regularly, spreading demand out over more areas, that would reduce the chance of creating localized real estate price spikes.

Economic pressure being one of the most common causes of migration, this is an important point. Land in Lancaster County is likely the highest of any Amish location – up to $30,000/acre.

So I think this strategy would be particularly relevant for those Amish still settling in cheaper-than-Lancaster but still relatively expensive areas like York County (versus those further afield, in significantly cheaper areas, such as upstate New York).

Besides helping ensure lower land prices for Amish, this approach may actually help with “P.R.” towards non-Amish neighbors – since one of the complaints heard about an influx of Amish settlers is rising real estate prices.

One potential hitch, however, is the weight of tradition in Amish society:

In the Lancaster Amish settlement, Nolt said, congregations are largely autonomous, so a settlement support system would have to be created from scratch.

Moreover, he said, up to now, the choice to move has been seen as a family or personal decision. It would be a break from tradition for church leaders to start taking a more active role, and deference to tradition is a powerful and important norm.

It will be interesting to see how this approach fares. York is a fairly rural county so there is room to expand – albeit in a managed way which seems to be the point of this strategy. If it works, I’d expect to see more Amish from Lancaster and possibly other areas adopting this approach to migration.

I recommend reading the article in full here (just need to do a free registration on the Lancaster Online site for access).