Like their brethren in most other places, New York’s Amish population continues to grow.

Karen Johnson-Weiner recently spoke on the status of Amish in the state of “Excelsior“(the state motto, and also a good description – “ever upward” – of the NY Amish population’s trajectory). 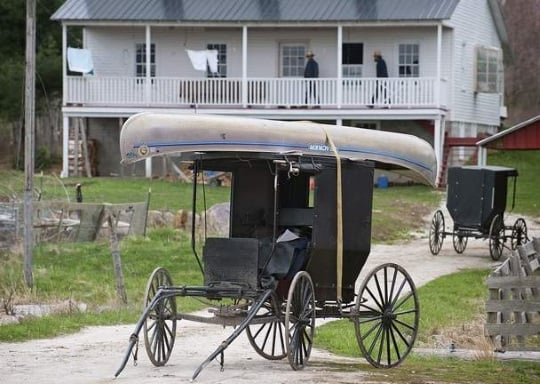 New York currently has the fifth-greatest Amish population. According to the latest Amish Studies figures, it has the second-highest number of individual settlements (tied with Pennsylvania at 55, and behind only Ohio with 61).

The second edition of Karen’s book, New York Amish: Life in the Plain Communities of the Empire State, was recently released.

As noted in the article on Karen’s talk, in the ten years since the first edition, 20 new Amish communities have been established in New York. It’s considered the fastest-growing Amish population of any state.


The Secret to Amish Growth

The Amish generally do not seek converts. The secret to Amish growth is quite simple, as Karen reminds us: “Very few people join the Amish, so growth really comes from within, with large family sizes.”

In many Amish families, a new baby can be an expected annual occurrence. I was reminded of this recently when when phoning an Amish friend, who changes his voice mail greeting every time a new child is added.

Family sizes of 6-8 children are common; those with ten or more are not unusual.

Eighty percent or more of those children choose to be baptized into the faith of their parents, typically beginning in their late teens.

Some states like New York have above-average growth due to Amish immigration. Cheaper, more abundant farmland in particular has attracted Amish to the Empire State.